Yes! This is the FIFTH time I have had the privilege of pacing my sister Lucca at the Seattle Marathon. If I'm not mistaken three of those runs resulted in a Marathon PR for Lucca... surely pacers deserve some of the credit? :) 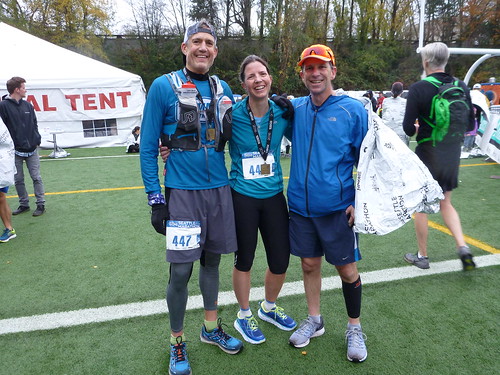 And so I don't get accused of hogging all the glory, Lucca's friend Robert Ruvkun (pictured here) helped out on at least three of these too. And Lucca knows how to work. HARD.

This year the weather was threatening to suck! We've seen sleet and sun during previous editions and two days out it was looking lots like the wetter variety but then a window showed up and come race day it was dry and in the mid 40s. I'll take it! We got drizzled on some during the last 45 minutes but it was not bad and didn't get any colder. I never needed to put on more clothes.

It seems like I get injured a lot and I have only been able to run the entire race with Lucca twice. This year I was recovering from a torn calf muscle and with only four runs under my belt post injury it seemed silly to risk re-injuring myself so I had to settle for the last 10 miles. But, this course is super close to our house so I was able to see Lucca at the start, at mile 4, mile 8 and then run with her from mile 16. Not so bad.

Getting to the start required some creativity but not as much as feared. All the roads on the course were not yet fully closed so I was able to scoot (literally, I was on my scooter) to the start with no issues and meet Lucca to hand off some gels and give her a last minute drink. I also dropped off my own clothing so I would have something dry to put on after we finished.

Getting home was slightly more exciting. Now all the roads on the course were fully closed forming this giant bubble you had to circumnavigate. After figuring out that Royal Brougham does not go through by the stadiums, and getting stuck behind a cargo train further south, I opted to get on I-90 for half a mile so that I could exit on Rainier. Thank goodness my scooter can do 50 mph and there were very few cars on the freeway this morning.

I changed my clothes and grabbing drinks, gels and my camera and walked up to the I-90 Express Lanes. Which is an awesome place to spectate this race from! Here are the Marathon leaders at mile four. 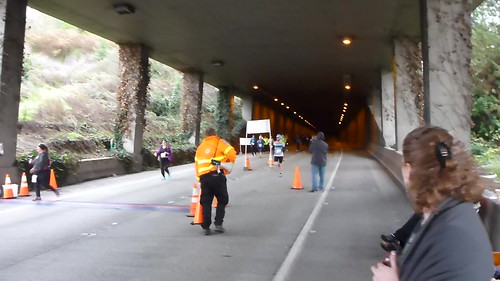 Spotting Lucca was thankfully pretty easy so connecting with her as she exited the tunnel was not a problem, she gave me her gloves and I gave her a drink. Then I had a front row seat for watching the leaders as they returned. When Lucca came running back we connected again, I gave her some gels for the run around Seward Park, another drink and headed home. This time I was going to have over an hour to wait.

Finally it was time to pace! Here I am looking very fresh (because I was) on Lake WA Blvd waiting for my sister. 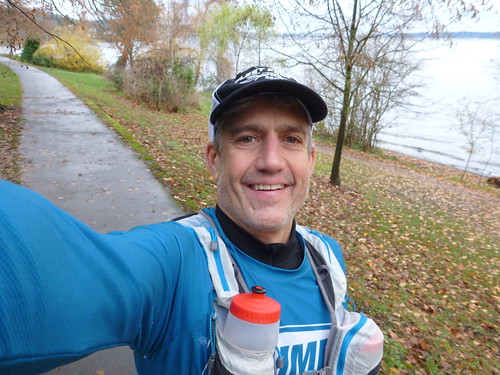 Lucca looked good! She is such a steady runner and it's pretty tough to tell when she is suffering. Unlike me who emotes every ache and pain. :( She pointed out a runner in a red event shirt that she had been running with for a while so we used him as a carrot/pacer. It worked pretty well and we might have even dipped below her target pace for a couple of miles. I also spotted a woman in teal that we could use if this guy sped up or faltered.

Lucca is usually strong on the climbs. Today looked like no exception. We passed red event shirt guy and teal shirt woman on the first climb just north of Madrona Dr but on the E Galer St climb she finally started to show the effort. 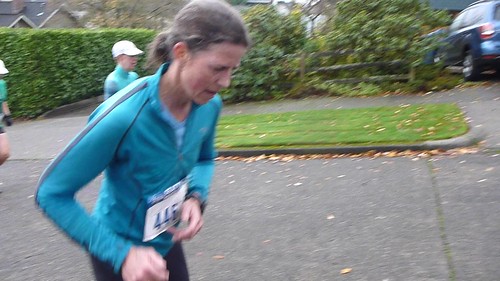 Up until this time we were solidly between the 3:40 and 3:45 pacers but going up E Madison St the 3:45 group and teal shirt woman slowly passed us. But not red event shirt guy, I suspect this hill was the nail in his proverbial coffin. Yeah for small, selfish victories! :)

Lucca ran a super descent and we had almost closed the gap to the 3:45 pacer by the time we turned left off of Lake WA Blvd and started climbing up Interlaken Blvd but it was just a little too much today. Once again we had to let them go and they slowly eased up the road.

My father always meets Lucca on Interlaken. It does not matter how crappy the weather is or that he only gets to see Lucca for 10 seconds, every year he's there. This year was no exception and we both got in a high five and a lightning hug before we ran into the woods.

Shortly thereafter we were joined by Robert.

Robert is awesome! He was a student in Lucca's Physician Assistant program at the UW and they have stayed in touch and he runs. And he loves to pace too! Robert has a great sense of humor and is also a reasonably accomplished action photographer with his iPhone. Always a plus. Meeting him always injects new life and energy which is much appreciated at mile 20+ believe you me.

We still thought there was a chance as Lucca's chip time did not coincide with the clock time and she battled on. That's another thing about Lucca, she never throws in the towel (that I have seen anyway), she still puts in a solid effort even if Plan A is not going to happen. So impressive.

Running south on Boylston Ave E can be a heart breaker. As usual there was a slight headwind here and I was so wishing I could give Lucca a little push or something, anything to help her speed up. 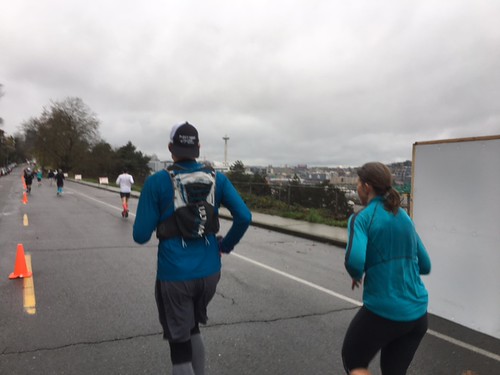 Lucca kept at it! She ran an awesome descent crossing I-5 and down Republican St. If only the route kept going downhill... but as anyone who has run this event will tell you, it does not. Somehow Lucca still managed a solid climb up Mercer St and into the finish. 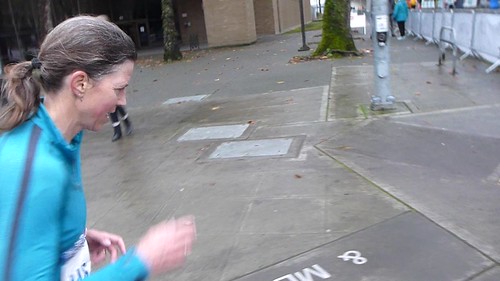 Here I am at the finish - fresh! 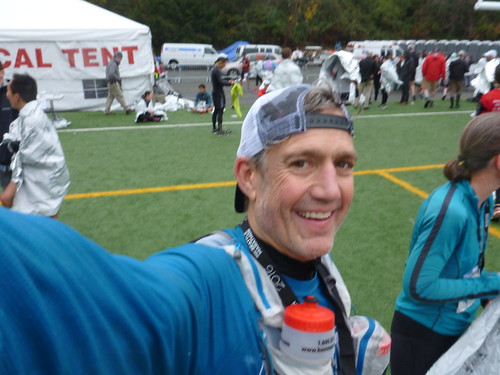 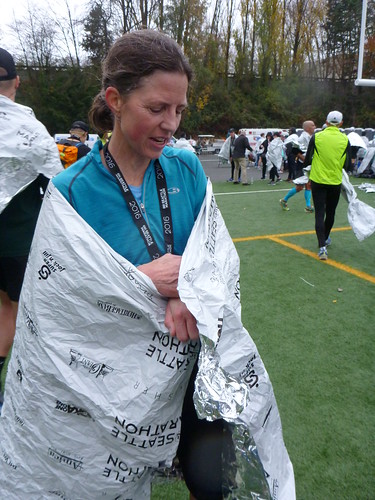 What...?! Hadn't she just pushed super hard? And thrown up (just a little) after crossing the finish line? Some people just have that smile that won't quit.

In the end Lucca only missed her target time by 1:11 and got her 2nd fastest time. 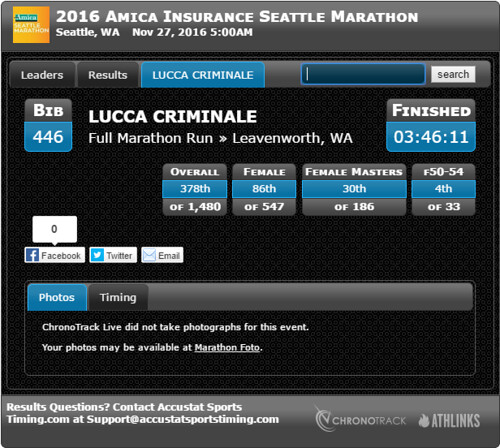 Talking to her this effort was much harder than her PR so on a good day, and perhaps with some Marathon-specific training like speed work she could still crush 3:45. I'm sure of it. And I hope to be there on that day.

Congratulations Lucca! You are an inspiration and I'm so grateful for the opportunity to run with you.