I had a big dose of self-doubt going into this race which is kind of funny as I have raced quite a few times in my "career" so you'd think that nerves would be a thing of the past. Well, nothing like setting an aggressive time goal to bring that back in a hurry. :)

Luckily it was a perfect day for the Rainshadow Running Sun Mountain 50k. It had rained the day before so there was no dust and it had dried up enough before the start that there was no mud. Just loads of awesome singletrack. It was about 48 degrees when we took off and in the upper 60s at the finish.

Did I mention that my sister Lucca was there running too and that I ended up running almost the entire event with my friends Aaron Ostrovsky and Simeon Ashworth? Complainers had zero ammunition in other words. 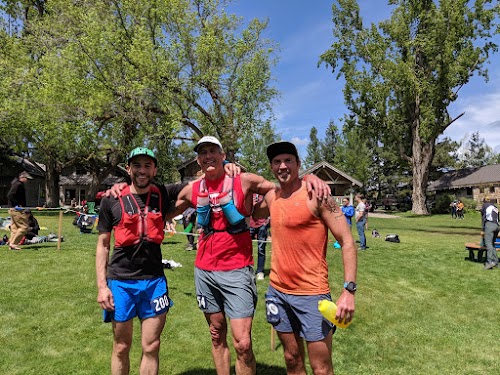 I love data! Numbers can be fun but they can also weigh you down. It's been a while since I have done this but sometimes there is nothing better than putting your GPS watch in a box and going for a run with zero technology other than the drawstring in your shorts so they don't come off when you jump into an alpine lake during said run. Anyway, back to the numbers

Last year at the Sun Mountain 50k, I had a pretty good day in spite of getting injured in the process.

This year I did not get injured during the run and recorded these numbers.

Apparently, I am nothing if not consistent. Another interesting tidbit, my watch recorded exactly the same amount of elevation gain both years, 5220'.

I have been using my Stryd running power meter for pacing.

For all the similarities, the two runs were also very different.

In 2018 I strained my calf just a few miles into the run. And in spite of starting with two friends, I was running solo from mile five or six to the finish and really had to focus to maintain my effort.

This year I planned on starting with Aaron and then at the start line we met Sim and suddenly we were three. Aaron is fast. Sim is fast. What were they doing with me? I guess I have developed a reputation as someone that is good at pacing their effort. Class is in session. Ready... go!

I loved the new course! In previous editions, there were several out-and-back sections and especially in the first one, you were getting bombed by the leaders coming down the steepest descent as you were crawling up it. Not so awesome. This time traffic was always going in just one direction.

The aid stations were perfectly spaced, pretty much every six miles. Planning my day was so easy.

Early on Sim started to ease up the road but I told him I wasn't going to go that fast this early and he slowed down! How nice. Here we are running early on, Aaron is just behind Sim. 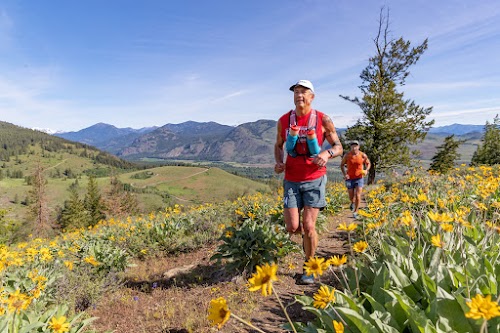 Some things (luckily!) don't seem to change.
As we ran along I usually ended up in front setting the pace. I would glance at my watch (I created a dedicated screen with just power and heart rate) every once in a while and Aaron and Sim would keep me entertained with their endless chatter. Don't get me wrong, it was very nice! I just can't talk that much while I'm running.
Based on last year I knew I only needed to stop twice, at the 2nd and 3rd aid station. Turns out Aaron was cool with this plan and I rolled through the Sun Mountain Lodge parking lot (aid station #1) without stopping. I think Aaron and Sim did stop but we are shortly all together again.
Since I usually carry all my nutrition (powders and solids) these days, at the second aid station all I had to get was get a bottle of water that I dumped my pre-measured ziplock bag of powder into. Done. Once again we ran out together.
Ditto for aid station #3.
Just before we got to the fourth aid station Sim and I separated ourselves from Aaron by a few meters. It wasn't much but because I did not stop and both Sim and Aaron did, I suddenly had a gap. From the course profile, I knew it was all downhill to Patterson Lake from here and then about two miles of rolling trail (just like last year) to the finish. But just because I sometimes know how to pace myself doesn't make the effort easy. :) By this time I was feeling pretty spent. I held off Sim for a mile or two but then he was right behind me again.

Here we are running along Patterson Lake. 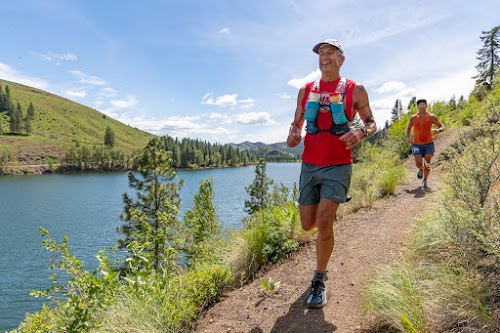 [Photo credit Glenn Tachiyama.]
If I have a weakness (and rest assured, I have way more than just one), it's mental focus. I can keep pushing, but pushing at maximum effort is just not my style. I run for fun after all so eeking out every last bit of effort is not something I am good at. As we hit the bottom of the descent I felt two things. 1) I was really psyched to be this close to the finish and 2) I was wondering when Sim was going to drop me. To his credit, Sim stuck with me for almost one mile along the lake and then said, "I'm going to see what I've got." and took off.
And then I was walking.
Sometimes when the elastic snaps there is no reattaching the tow rope.
But I didn't totally fall apart, I just slowed down a little. And after walking for two short stretches I was able to jog it in. And behind me, Aaron finished strong! Turns out he was just struggling with the gradual climbs and on the shorter, steeper stuff and on the descents he was doing just fine.
Sim finished in 5:06:58 (15th overall).
I finished in 5:08:15.
Aaron finished in 5:10:03.
Turns out Aaron even passed one guy in the last couple of miles to grab that 17th spot. So. Freaking. Awesome.
Talking to both Aaron and Sim, I think this is the fastest they have run at this course if you grant that this edition was longer than the previous ones. And although I have beaten them both in ultras in the past, I'm guessing that won't be happening again soon after this pacing "lesson". I suppose that's the price you pay for friendship. Hahaha. I'm only partially kidding. :)
I learned and reinforced some things at this run.
Huge thanks to both Aaron and Sim for trusting me with pacing duties! I don't think we started with this as a plan but it worked out that way to the benefit of all of us.
Here are all my pictures.
Results
Nutrition (before)
Nutrition (during)
Nutrition (after)
Gear
Stryd power file
at 6:00 PM No comments: