Seattle-to-Portland, not all that it's cracked up to be...

So. Some time ago Shelley expressed an interest in riding the STP and I of course eagerly accepted. I LOVE riding our tandems with her and figured that we would be peaking fresh from two weeks of riding in Portugal so this would be cake. As a bonus, I invited Andy G from work to come along and he accepted. Nice.

Well. That was then and this is now and Martin is much wiser than he was prior to Saturday morning. But let me break it down for you.

This was my first time doing this ride in two days. In the past I have just rolled down from my house to the start with a messenger bag, tossed it on the Portland truck and then picked it up at the finish. This time we had to drive the bike and duffel bags to the start (luckily I was able to park on campus 'cuz I work there), walk the bike and bags to the start and then put them on the Centralia truck. 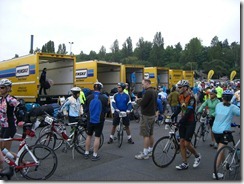 The start window for cyclists is from oh-dark thirty (people were rolling out at 4:45!) to 7:30 AM on Saturday morning so we opted for the incredibly sane departure time of 7. Seemed like a super smart choice, right? Wrong. When you leave as 'late' as we did, you are mired in countless people who are going to average 15 mph at best and even if you pass one or two packs on the road, when you stop for a light they are instantly replaced by hundreds or other cyclists just like them.

Here we are before we started. All smiles. 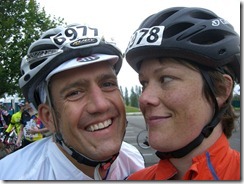 As is my nature I had been hyping the best parts of this ride for weeks (months?) prior to the start and by now Shelley and Andy had both had their fill. I had intimately described each rest stop and stretch of road and hill based on my wholly inaccurate recollection from my last ride which was around five years ago. Typical.

At the top of my list of misinformation was my description of the REI food stop about 25 miles in. I had solemnly assured everyone that this food stop was the bomb and that we could assuredly fill our pockets with enough treats to last all the way to Centralia once we got there. What did they have? Peanut butter wraps, fruit and Odwalla juices. Oh yeah, I guess there were some Clif products around if you could find them but the crowds were so massive it was almost scary to go anywhere! And there were cops, err... volunteers everywhere to ensure that you only took one of any item. I lied, said one juice was for my wife and got the hell out of Dodge. Who need solid food anyway. Shelley got even less – here she is with her one juice. 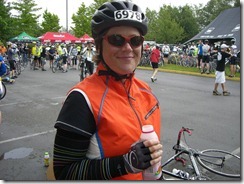 And here is Andy showing us that undershirts do indeed conceal your bib shorts suspenders. Next up was my assumption that this would be bike ride. Oh sure, the vast majority of people rode bicycles but the STP has turned into a bit of a circus and people seem to be outdoing each other in their efforts to ride the most insane mode of transportation down to Portland. Like these ElliptiGOs. 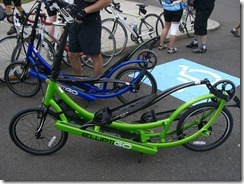 ASIDE – these ElliptiGO people are obviously dedicated/nuts...

Or on a skateboard. Not sure which one of these guys was there this year but damn if they didn't do it again. 200 miles in two days on a long board, holy leg piston Batman.

Or the three hippie looking people on a side-by-side-by-side triple bike. Sorry, no pictures of this one... And in case you were wondering, this rig DOES take up the entire shoulder/right lane of traffic so good luck trying to pass them whenever there is any traffic. Or there is any sort of incline. Or at any intersection. You guessed it, we had to pass them several times.

Or the dude on his crazy three-wheeled, upright, sway-it-back-and-forth-to-keep-it-moving thingy... I was not even sure how to Google that. But it quite possibly took up even more space as it wagged back and forth down the road than the triple thing. Thanks goodness we only passed him once. Not even sure he finished to tell you the truth, his forward progress was not so impressive...

I also had no clue what massive amounts of people we would encounter on the road. When you do the ride in one day and when you start at 6 like I usually did in the past, you 1) have lots fewer folks to pass and 2) after you hit the half way point there are WAY fewer people on the road. This time that was not the case – it was almost claustrophobic from the start all the way to the finish.

And what is with all the 'mini' (read: pay-for) food stops?! I paid good money to do this ride and never have I had so little support. There were literally TWO free food stops each day. Two stops in 100 miles? C'mon. Compare that to a ride like the Seattle Century where you get food around every corner and then a f'n fabulous dinner and beer at the end all for no extra and it makes me wonder what's going on. Sure, the scale of the rides is not really comparable but still, I remember more food...

Did I mention standing in line? By the end of the ride we were experts at that; EXPERTS I tell you. We had to wait in line at every stop for everything from the food to the drink to the bike coral to the well, you know. 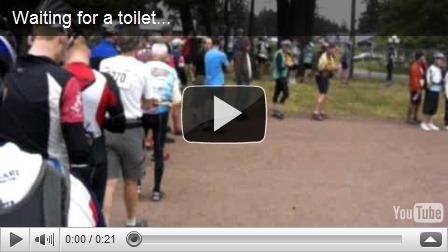 There are never enough.
Technorati Tags: Seattle to Portland,Cascade Bicycle Club,STP
at 5:23 AM No comments:

back of the bike

Thanks to Shelley for being much more creative than me and for taking the time to splice together this compilation from our ride at the Travessia de Portugal and for finding the perfect song to accompany all the images. 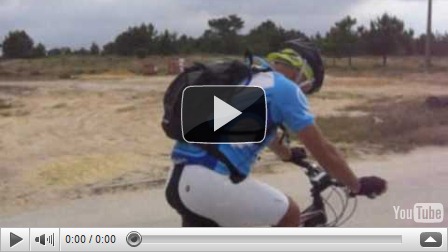 back of the bike
The song is: LCD Soundsystem - All My Friends