I have had a fantastic experience being paced at this event so when I heard Stephanie Gundel was looking for pacers at the Cascade Crest 100 Mile Endurance Run I jumped at the opportunity. 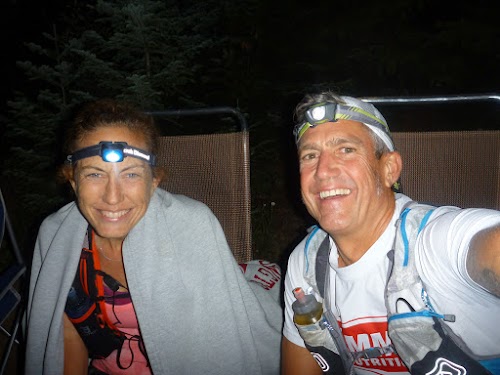 Turns out Stephanie is a popular person! Originally I was hoping to run 50 miles but she was only able to squeeze me in for 20. Hey, this was still all good.

This year the course was an out-and-back from Easton to Hyak and then back to Easton because of fire danger on the other side of I-90. While perhaps a let-down for some, this course I think was harder and had more singletrack. For whatever that's worth.

To pace someone, you usually need to arrange transportation and in this case, Daniel Letzler was nice enough to pick me up from the Stampede Pass aid station where I was leaving my car and then drive me to Hyak. Thanks Dan!

I arrived at the Hyak parking lot and saw some of the usual suspects. 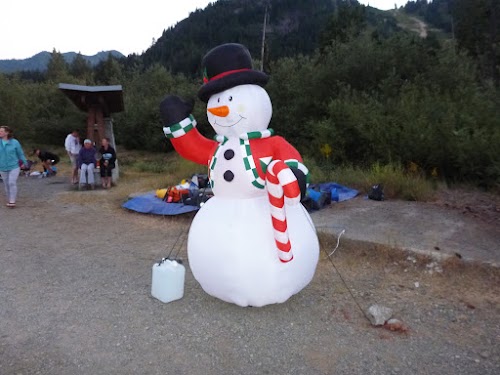 When I picked Stephanie up she had just run through the Snoqualmie Pass train tunnel. And now with the new course, we went right back through in the other direction. It wasn't really dark enough to need a light when we left the Hyak aid station but of course in the tunnel, you needed a light, and when we exited it was much darker so I ran this whole stretch whit my headlamp.

Climbing up from the John Wayne Trail using the rope was kind of fun. For me. :) And actually, Stephanie was moving really well at this point so I suspect it was not so bad for her either. Proof of how well she was moving was all the people we encountered going in the other direction!

I think this was Stephanie's first 100-mile race. We cruised through the first aid station (Ollalie Meadows), my first anyway, with very little delay. When we arrived at the second aid station (Meadow Mt) I could tell Stephanie was working much harder. I was doing fine in my short sleeve shirt but Stephanie, who was more tired and sweaty, was still in a tank top and arm warmers. Here she sat down for a minute and suddenly the effort caught up with her.

I turned around and Stephanie was shivering. A lot. I grabbed a wool blanket from another chair, wrapped it around her and gave her some hot soup. Repeat. The soup part anyway.

After a couple of minutes, I had to suggest that we get moving. I know it can be hard to warm up sitting around in shorts in the middle of the night... to her credit, Stephanie agreed and we got back on the trail.

Running at night can be fun! It was a beautiful evening, not too cold and so nothing to do but chat and move. The things you talk about are not necessarily that entertaining but they sure do help distract you from the effort. 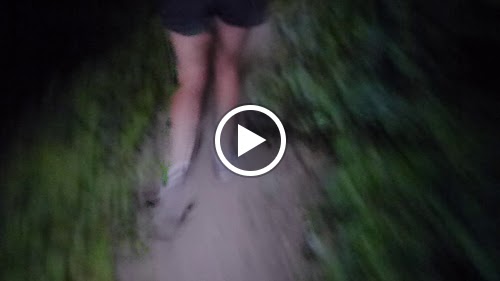 Stephanie warmed up quickly and soon we were jogging the flats and descents again. Nice! Selfishly I was just getting warmed up and by the time we pulled into the Stampede Pass aid station I was bummed not to be going any further.

As Stephanie connected with her crew and got resupplied, I handed my pacing duties off to Dan who was running with her all the way to the finish.

And then - as was my right as a pacer - I proceeded to avail myself of the freaking delicious food at this aid station. OMG. There were some fried, cheese quesadillas with avocado smeared all over them... More please. After a few minutes, I started to feel like a giant pig so tore myself away from the food tables and walked back to my car.

It was a DRY day so after wiping off the dust and changing my clothes I started the drive home. Suddenly I started to suffer from pacer withdrawal. Just 30 minutes ago I was helping someone and surrounded by tons of other people who were so pumped about keeping you moving. Now I was alone, it was quiet and there weren't even that many cars on the road. Maybe that's because it was TWO O'CLOCK IN THE MORNING.

Along with the withdrawal, I was also buzzing a little. When I got home it wasn't exactly easy to fall asleep.

Turns out Stephanie did really well! She got 4th in her age group, 28th place overall and finished in 27:05. Boom! Glad I could be a part of this and congratulations Stephanie. Other than encouraging her to get out of one aid station, my pacing duties were pretty darn easy on this day. All credit goes tothe runner.