Oof. I've been bragging lately about how well my body has been tolerating running but that stopped today at the Rainshadow Running Sun Mountain 50k. I suppose I could have lessened the severity of my injury by stopping when it happened instead of carrying on... Yeah, I know.

But it was an otherwise great day! The trail conditions were freaking first rate and so was the temperature. Plus, adding a lake to jump into at the finish to the already top-notch Rainshadow after-party was awesome. And how often can you say you finished just one spot/five minutes behind Gary Robbins? If I'd only known I totally would have run five minutes faster. Not. #hindsight 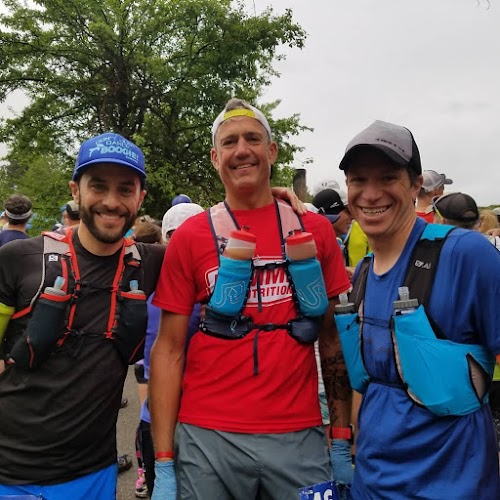 It rained most of Friday. Anywhere else that would have resulted in slip & slide conditions but in the normally dry and dusty area of Sun Mountain Lodge, it made the trails perfect. The ground was moist and tacky, not at all greasy or slippery. It also made the ground softer, and I always appreciate less impact.

The course for this year's event was brand new. It was more or less the old course run backward with a few twists. One funny thing about this race is although you never see the same trail twice, you are never more than a mile or two (as the crow flies) from the lodge. There were times when I was running through the woods and couldn't see anyone but I could hear voices that were just 100' away.

I started with Aaron Ostrovsky and Greg Luloff. I think we all had similar, tentative goals and it's always great to be on the trail with friends. We did separate during the run but I saw so many other people I knew! Trail running really is a community.

Instead of starting off with some flat and downhill trails, this year's course took us down the paved road for a few hundred yards and then it was straight up the longest and steepest climb. That was fine except the trail was new/narrow and there was an out-and-back at the top so the leaders were running (read: hauling ass!) down the trail while most everyone else was still climbing. It required some concerted concentration, going in both directions.

I've realized I never tire of seeing Glenn Tachiyama out on the trail. He always recognizes me from a distance, cheers me on, and takes the most amazing photos. I bet he knows more runner's names than anyone. Here I am just past the first aid station. 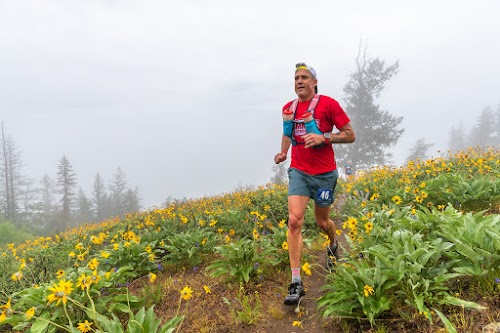 I thought, and based on what folks were wearing at the start I think a lot of other people also thought, that it would be chilly. Wrong. It was quite comfortable and pretty muggy which made it feel even warmer. At this point, maybe eight miles into the race, I have already taken my gloves off and could have done without my extra shirt. Oh well, it wasn't so warm that I was uncomfortable, I was just carrying a few extra ounces of wet clothing.

The wildflowers were out in force! And you could smell them! I saw yellow, purple, orange, white, so pretty.

My fueling is down to a science (don't let me down science!). If I want to go fast, which I was trying to do on this day, I check out the aid station spacing and plan my run so that I have enough fluids and so I run out pretty close to the finish. These days I carry everything I need so I only need to stop for water and the occasional supplemental item if I'm craving it. Today I stopped to pee at the 7.2-mile aid station, I got water at the 13.2 and 18.5-mile aid stations and that was it. I usually carry 48 oz of liquid (2 x 24 oz cycling water bottle) which normally lasts me up to three hours. As I ran through the 22.5-mile aid station waving off the proffered water and tossing my trash into the garbage can on the go some of the volunteers acted impressed, "Woah, he's going straight through!" That was nice, and I was in need of a boost by this point.

As usual, Glenn was on course a second time. Here I am after the last descent running along Lake Patterson less than two miles from the finish. 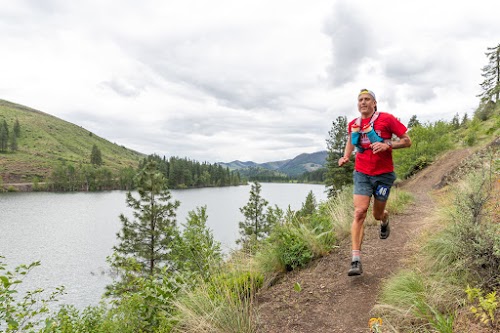 About my injury. Maybe four or five miles into the race (way too early by the way!) I felt a twinge in my left calf. For a while, it kept getting worse and I was seriously considering quitting at the mile 13.2 aid station. I was bummed but these days I like to think I am not as dumb as I used to be and would hopefully not run through a serious injury and make it worse. My calf hurt enough that I had to change the way I strike and try to engage it as little as possible. But after getting worse it got a little better (read: less worse). So I kept going past mile 13.2. And it never started hurting quite as much again so I finished.

After finishing I looked at my left calf and it didn't look any different than my right one so I hung out and chatted with friends. By the time I got home Sunday morning, my calf was very swollen and discolored. Time to call for help. Have I mentioned I love my care providers?

Sunday - I am able to schedule an appointment with my primary care physician for first thing MONDAY MORNING. We're talking 7:30 AM.

Monday - after examining me, I get an ultrasound to check for blood clots (there were none) and am able to schedule an MRI scan for first thing Tuesday morning which will check for muscle tears.

Tuesday - I get the results within two hours of the scan and my calf is torn. But not bad enough to require surgery! I am instructed to see my Physical Therapist who will assist me in my recovery. Again. :( I am able to schedule a PT appointment for first thing Wednesday morning.

Did I mention I have a massage scheduled for Thursday afternoon?

Boom. It takes a team.

I try to learn from every race, and from most other runs. Here are my takeaways from this day.

Here are all my pictures.
Results
Nutrition (before)
Nutrition (during)
Nutrition (after)
Gear
Stryd power file
at 8:44 PM No comments: