Can I just say that it is awesome to run healthy? The more I talk to fellow runners, the more it seems that most of them are usually operating anywhere between 50-90%, RARELY are they at 100%. Today I was feeling like I was 90% percent and rising! Here's to some awesome summer goals.

The race I ran today was the Evergreen Trail Runs Lord Hill 20-mile. True to its name, this run incorporates a big hill (Lord Hill) that you need to climb once per 10-mile lap. And it's a legit climb, as in hiking. I ran this race for the first (and only other) time back in 2012. It was fun to be back. And good to see I was able to go seven minutes faster this time. :)

This race is known for mud. Lots and lots of mud. Lord Hill is usually a slip & slide going up and sometimes worse going down. It's the kind of race where you attempt to tiptoe around the puddles for a bit until you realize it's fruitless and eventually you just end up running straight through the water. This shot speaks volumes. 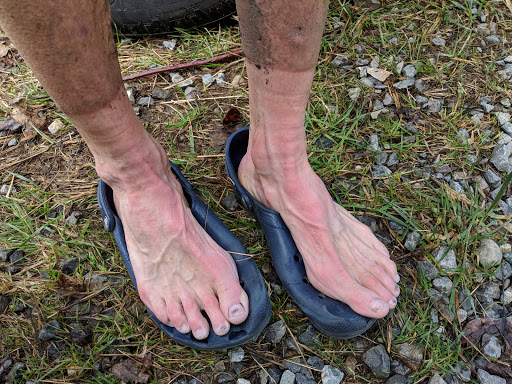 I signed up for this race totally fortuitously. Friday I posted to the SMRG Facebook Group that I was looking for a 20-mile run this weekend and Jerry Gamez replied letting me know that because I had volunteered at an Evergreen Trail Runs event last year, I had a free entry. Nice! Done and done.

I showed up at 7:15 for an 8:00 AM start. This was perfect as I got a good parking spot and I was not too early. I got my number, pinned it on, used the bathroom and warmed up. Zero stress. There was a racer's meeting at 7:50 where Jerry basically said it's muddy and the hill is hard. Thanks Jerry.

This course has a unique feature. About 100' from the start is a swamp followed by a creek. If one doesn't get your feet wet, the other will. Somehow I managed to hop, skip and jump my way through this mess without soaking my shoes... what a relief. In 2012 my shoes were dry for exactly 100'.

I started near the front - primarily to get a clean line through the swamp and creek - but in short order, people were passing me as the trail started to climb. I didn't get worried, not knowing what my fitness was like I had resolved to take it easy for the first 10-mile lap and then (hopefully) negative split the second lap. About one mile into the course you head up Lord Hill. It was here that Jenny Easterberg (who is a freaking Energizer Bunny!) passed me like I was standing still. I figured that was that.

Luckily, once you crest the main hill, the trail levels off and you can run again. And on the plateau, there are a couple of great single track sections! Although my climbing is not stellar currently, my descending and my ability to navigate slippery trails is not so bad. About halfway through the first lap, I caught Jenny (to my surprise!) and after that, we swapped positions about two or three more times during the race. It sure was nice to have motivation out there!

The 20-mile runners and the 50k runners all started together so it was impossible to tell how I was doing but I knew there were only about 5-8 people in front of me so each time I passed one I felt like I was moving well. It got tricky after we finished the first lap. All the 5-mile, 10-mile, and half marathon runners started at 9:00 AM so I was suddenly working my way through tons of traffic. Some of whom were really fast! At this stage in the game, I only have perhaps one or two hard efforts in me during any race. I had to dial in my pace and hope that people came back to me instead of speeding up to catch them. Lucky for me most of them did come back. It was supremely satisfying (in a very shallow way of course) every time I caught a half marathon runner.

I ran the first lap in about 1:36? For a while, I fantasized about finishing in sub 3:00 but it was not to be. I did manage to negative split and ran the second lap in something like 1:28. Ouch! I really had to push and those last three miles were a chore.

The last mile of this loop is all downhill. And it's FAST! The last few hundred yards are on a dirt road and I was flying! I was going so fast that I thought I might not be able to keep my legs moving fast enough to keep them under my body... You know when you have visions of a major wipeout? I am SO glad I kept it together.

One way I know I am really 90% is that after finishing my body felt pretty good! I absolutely hammered that last descent and my quads were fine. I also had zero feet or back issues. Nice! I did feel my stomach going south the last three miles but that was because I was pushing the pace beyond my current fitness and it went away once I crossed the finish line and slowed down.

After the race, I grabbed my recovery drink, some recovery chili and tried to walk a bit while cheering on finishers. The sun was out! I could not believe it. 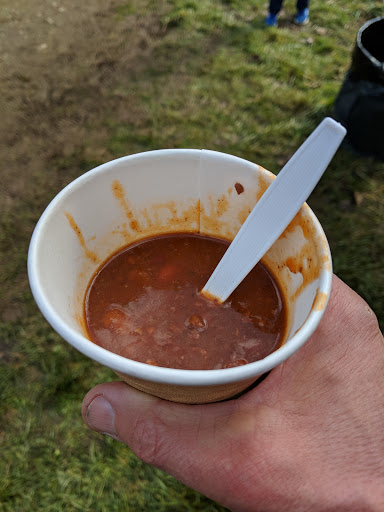 There are about a million different ways to sync posts between various different social media platforms and no doubt there are several that are better than this one but I didn't really want to start using a new tool like Buffer, etc. and I was already using IFTTT so here is what I did and why.

Pictures are much more engaging than text so this was not going to fly. Here is what I do now. And so far it's working great! 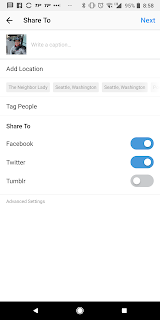 What about when Instagram is not involved and I just want to share a Tweet on Facebook? For this I went back to IFTTT and use an applet that posts to Facebook when I use a specific hashtag (which I can specify), it even strips the hashtag from the Facebook post.
This works for me but any/all comments are welcome if you have a "better" way to sync these three social media platforms. And if you know how to add Google + let me know!

Turns out Buffer really is the way to go. When I share an Instagram post to Facebook and Twitter, the image or movie is not displayed in Twitter and instead, you just get a link. But in this age of record short attention spans, if people can't see the image they won't click the link. If I share a picture or movie using Buffer and share it to Twitter/Instagram/Facebook, all three services display the picture. Yes!

As of this update, Buffer will unfortunately not share to G Suite Google + pages meaning if you have a Google + page that is using a custom domain like mydomain.com, Buffer can't share to it. You can only share to Google + if you use Gmail (myname@gmail.com). Hopefully, that gets resolved soon.
at 9:11 AM No comments: