Wow. I have ridden my mountain bike on these trails in Capitol Forest for years but until today I have never run on them. They were great! It didn't hurt at all that we had fantastic conditions as in not too cold, no rain and the trails were incredibly dry for this time of year. That said, the organizers did alter the course today as there was a lot of snow on Capitol Peak. For that reason we never climbed to the top and the course was very runable. 100% runable to be honest. The Capitol Peak MegaFatAss is an iconic NW trail run. These trails are like Tiger Mountain for people that live further south.

Lucky for me Dave Swoish showed up. Turns out we were very compatible today and had the same goals so we ran 99% of this together. I love company. Especially when it's good. 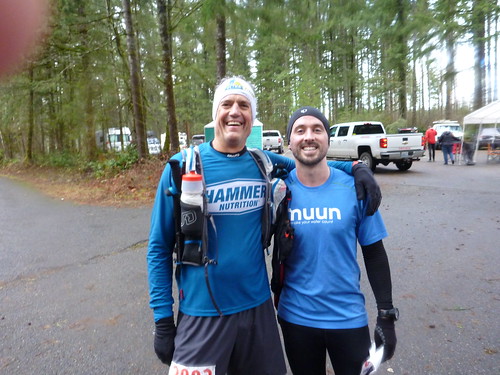 Driving in Seattle sucks. But when it's at 6:00 AM on a weekend you get where you are going lickity split. Google Maps told me the trip would take 1:30 and I got here in about 1:15? Let's just say that after I got my number I headed back to the car and shut my eyes.

This was my first long run of the year so I took along all the gear. Even my trekking poles. It made me smile when I realized I was the ONLY PERSON WITH POLES. And a lot of the fast runners didn't even bother with a pack. Oh well, I have not worn my pack on months so it was good to get used to it again.

I got out of the car with perhaps 10 minutes to spare. I did some leg swings, a couple of squats and walked over to the start. One advantage of showing up ridiculously early is you can park in a very convenient location. There wasn't much fanfare, just a short announcement by the race director. 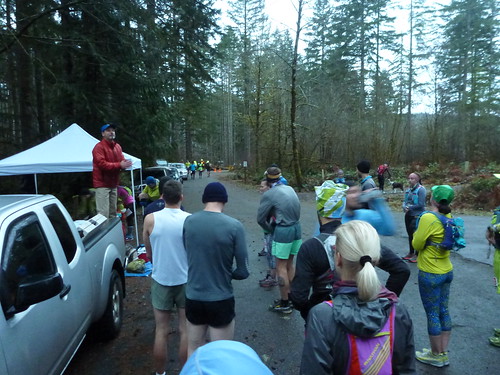 And then we were off. 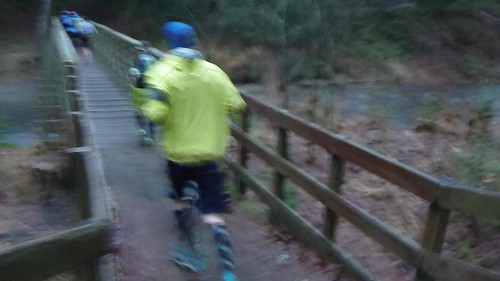 We ran. And ran. And RAN. After about 10 miles with zero walking Dave turns to me and says, "I guess this is a running race..." No kidding. Without Capitol Peak in the mix this course was - assuming you were fit enough - entirely runable. Rats. Today was going to be my longest run in ages (maybe six months?) and I'm not a great runner in the first place. I usually look forward to the hiking breaks.

With all this running I didn't have the chance to take too many pictures. But I did get some video of Dave. 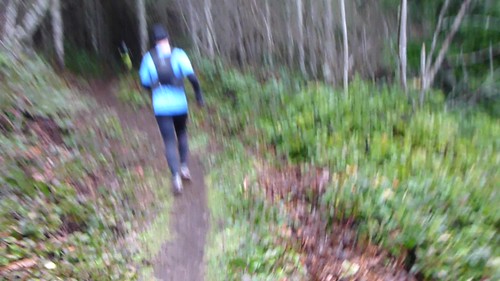 And of the top of the course. 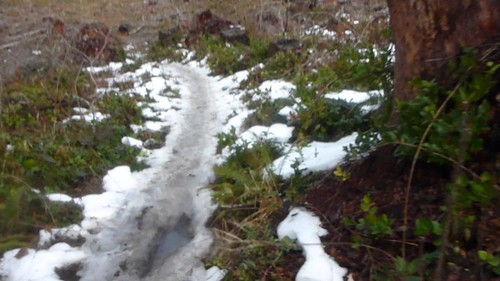 And of us reaching the finish. 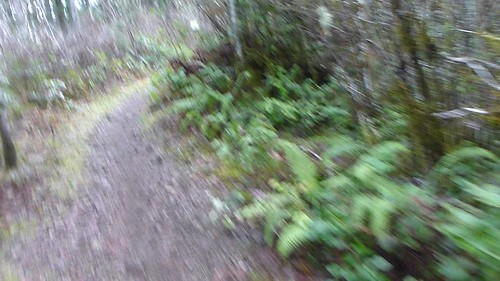 Okay, I did get a few pictures. Since this was a Fat Ass event there was minimal support but there was one water only aid station about half way through the 25k loop. Here I am at said aid station pointing to two things I did NOT need all day. My trekking poles. 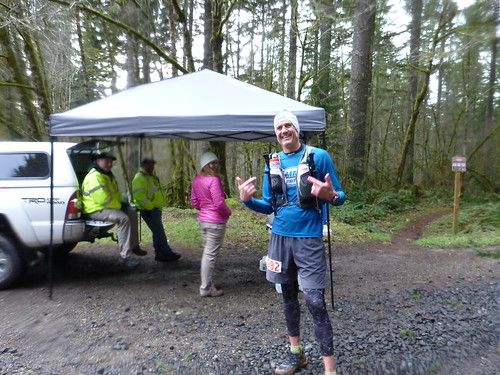 And of Dave and I enjoying some butternut squash soup at the finish. 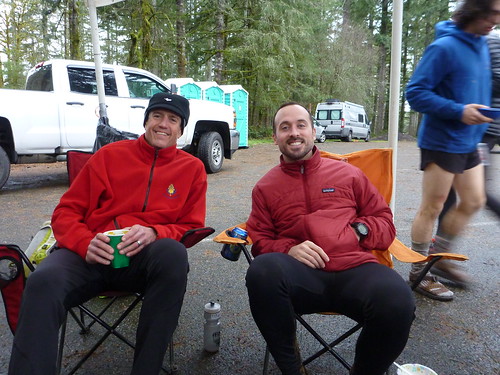 The race was so runable I had to make up sections to walk on our second lap just to give myself a break. Truthfully, I was pretty tired by then which helped. Every time I would transition to hiking Dave would say something like, "Oh yeah, that's a hill."

This course was fun! And FAST. And soft. And scenic. And very well marked. Too bad weather like what we had this year is an anomaly. There were roughly 200 people signed up, about 80 for the 50k and about 120 for the 25k. Way to go Oly Trail Runners.

I can already tell that two themes will persist in my posts throughout 2017, how awesome my new shoe sponsor is and how well the products from my nutrition sponsor work. :)

Today I wore my Topo Athletic MT-2 shoes on trails for the first time and they excelled. ALL my Topo shoes are incredibly comfortable but they do so many other things well too. 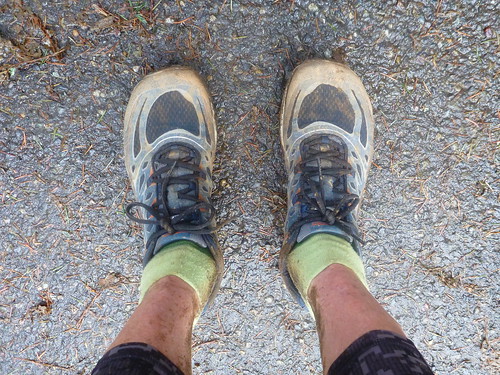 Just one day before this run I got some Hammer Nutrition Fully Charged so I figured why not try it out...? It's received such good reviews and with so many races coming up on my calendar I only had so much time to experiment with things. It was awesome! My "race bottle" has thus evolved.
Each 24 oz. bottle that I carry now contains the following.
I love liquid food. It's easier on my stomach and when I can get my calories and stay hydrated at the same time it's one less thing to think about. As long as I keep sipping, I'm good to go. And with Endurolytes I get all my electrolytes and with Fully Charged I get my race day boost too. Done and done.
Here are all my pictures and video.
Results
Gear
Nutrition
at 8:54 PM No comments:

At the annual Bridle Trails Winter Running Festival put on by the Seattle Running Club trail conditions were perfect! That's what you get when it's dry all week prior to the race AND it's cold enough to freeze any existing mud. Course records were broken in pretty much every division. 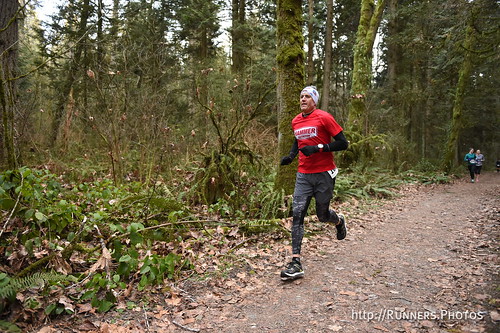 This has NOT always been the case. The weather this time of year in the greater Seattle area is a crap shoot. More often than not this event is a mud bog. Once it was a sheet of ice. Once it was so windy they almost canceled and finally said, "run at your own risk". Nice.

This event is unique compared to most trail runs in many ways. Bridle Trails State Park is right in a city, namely Kirkland. It also starts at 3:00 PM so if you are running more than 10 miles you will be doing most of it in the dark. This was my first "race" of the year. I put race in quotes because running fast is still a way off for me so this was a race only in the sense that my effort was timed but we did not take it too seriously.

I ran with Bill Huggins on a 2-person relay team. Bill is one of the guys that got me into trail running in the first place. We've been out in the woods together a few times recently and it's been really fun reconnecting.

The hardest part of this race was getting back out there after you had fully cooled down! You just could not stay warm sitting still for 35 minutes so I would pile on the clothing, hang out by the propane heaters and basically be super cold when Bill would show up after his lap. I'm SO glad I had the foresight to bring dry tops for each lap. Being able to change out of a sweaty shirt each time I finished my run was a dream.

My first two 5-mile laps didn't require a light but I was pushing it the last mile of my second lap and only managed it because I knew the course. Heck, it was fun. And then running with a light on my last lap was fun too! I always feel faster at night when I'm running/skiing/whatever although the reality is I'm usually slower.

Thank goodness there was no wind! That meant once I got moving I didn't really need that much clothing. It was like jumping into a cold lake, once you are in it, you are mostly okay. Mostly...

The gun went off and the leaders were promptly out of sight. Based on their time, they averaged around 6:00 pace start to finish. Nice. It took me about one mile to find my position in the pack and then being fairly fresh, I started to look for carrots. Up ahead I spotted what appeared to be a mother/daughter combo and figured that should be easy to catch. Two miles later I was still chasing them! In this photo you can see them and me WAY in the background... I'm the last runner in the red shirt. 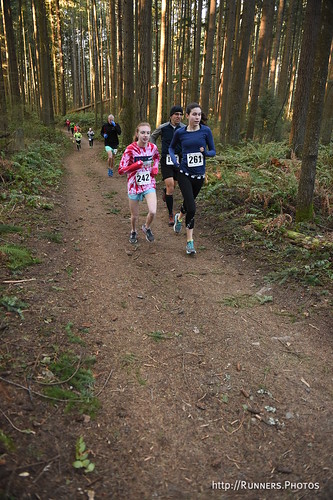 That girl looks like she's 12! At least I was able to pass an eight year old boy around mile two. Booyah!

Another unique aspect of this race is it takes place on equestrian trails. And around this park, it seems like everyone has a horse (or two or three). I encountered four during my three laps. The first three were no problem but the last one was exciting. The owner was doing a great job of walking the horse way over to the side of the trail (even though they have the right of way) and so as I ran past going the other direction I scooted by way over on the other side of the trail. I had just passed a woman before I saw this horse and seconds after passing I heard a lot of rustling leaves and a scream. I guess the horse got startled and the woman had understandably freaked out a little. Incredibly the event photographer captured this right before the horse acted up. 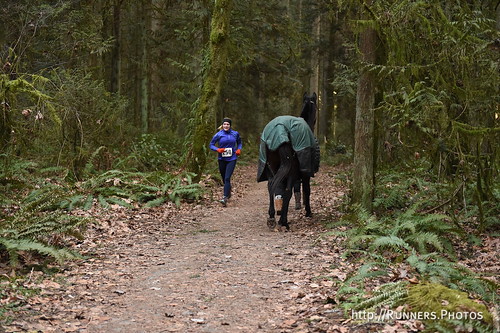 Once I knew this woman was okay it made me laugh. Maybe out of nervousness.

The photography coverage was awesome! Here I am on my second lap with my light turned off. 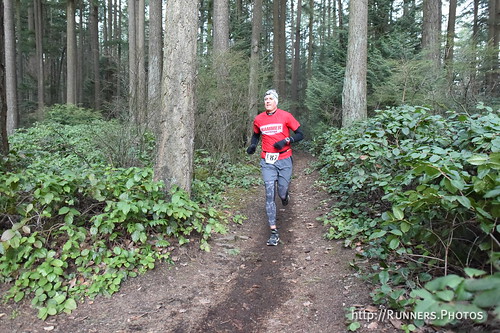 A nice thing about events that use a loop course is aid stations are easy to manage. Since this is in a park with permanent structures, the aid "hut" was a tiny log cabin right by the start/finish. After I finished my lazst lap I stopped by for a snack while I waited for Bill to bring us home. 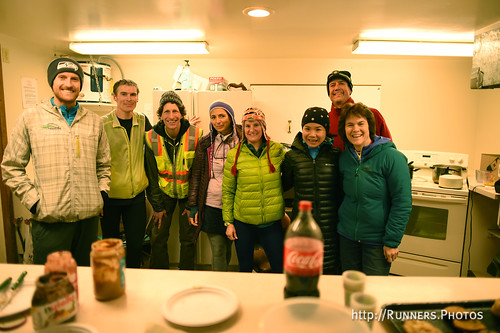 And here is the finishing chute from the runner's perspective. 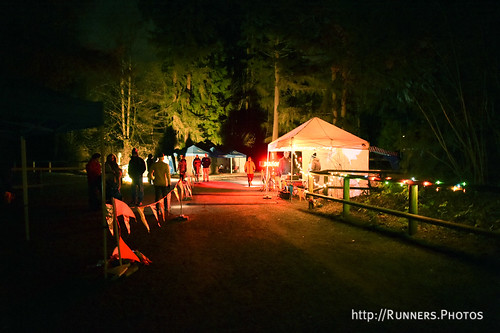 I got a new shoe sponsor for 2017 and I just can't stop raving about how comfortable My Topo shoes are. So great to get support from exactly what you want to use.

But my fitness is coming back! I won't be slow too much longer.