For some reason I was nervous going into the Orcas Island 50k this year. Not sure why as my fitness has been improving steadily and I ran 50k two weeks ago and felt reasonable throughout. I guess this was my first real race of the year and this course can be challenging. I mean it IS challenging but can be VERY challenging if you are not ready. And in spite of the name of the organization that promotes this event (Rainshadow Running), it has been known to rain here. Just a little. This year we got a bonus. 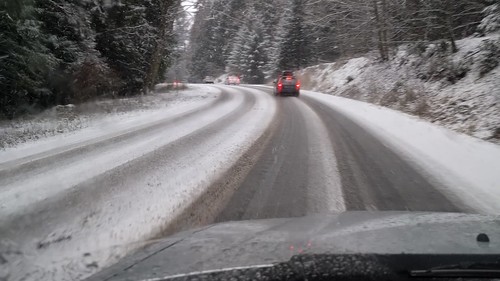 But let's not get ahead of ourselves.

In the past I was the guy who didn't mind sleeping in his van (which I did the first time I ran this event) but I'm not that guy anymore. The second time I ran this event I woke up at a ridiculous hour so we could drive 90 minutes to catch the 60 minute ferry to make the 8:00 AM start. Yuck. I'm no longer that guy either. This year I booked a room at the Rosario Resort & Spa for Friday and Saturday night. I do love being pampered.

Another bonus about leaving in the middle of the day Friday is no traffic!

As I drove north from Seattle I started to see snow on the fields by the side of the road. By the time I was boarding the ferry in Anacortes, snow was landing on my windshield. 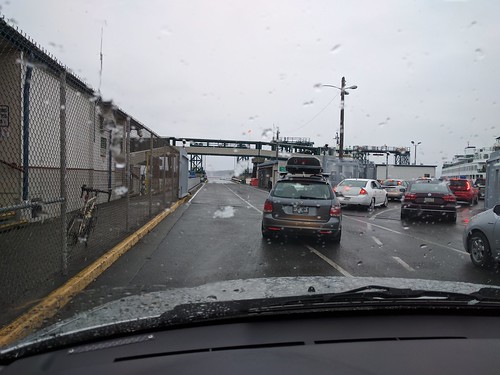 The Rosario resort is awesome. 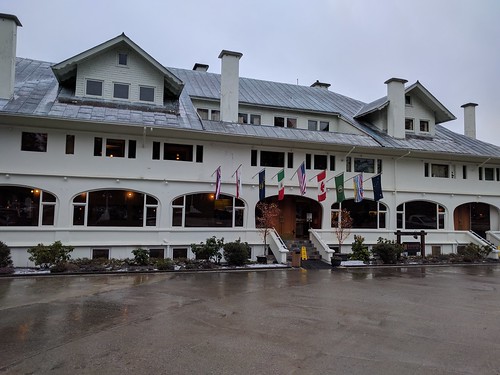 The beds were comfy, there was a fridge and I could not wait to avail myself of the "spa" part of this resort come Saturday evening. I organized my gear, put powder in my bottles. watched some forgettable movie and hit the hay. 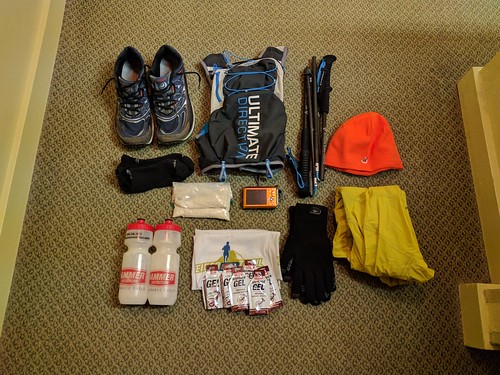 Saturday morning was luxurious! No early alarm or rain on the tent or anything. I basically filled my bottles, grabbed my gear bag, and drove a couple of miles to the start. Seeing as how I got there VERY EARLY, I had lots of time to 1) use a clean restroom prior to everyone else showing up and 2) take selfies. 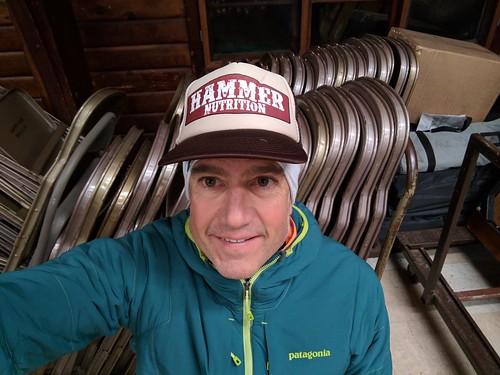 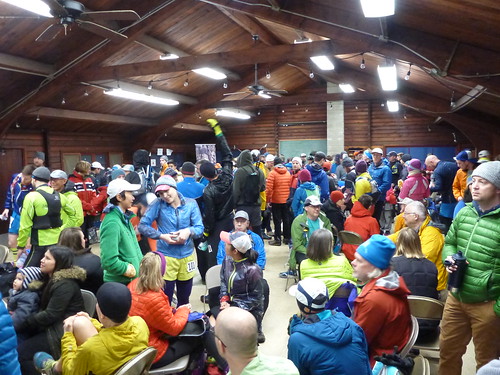 And then it was time to head outside into the rain. 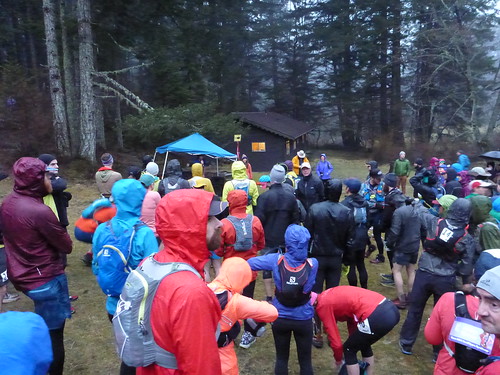 I was dressed for success. 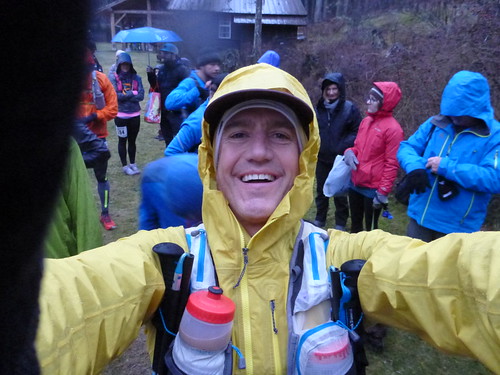 The first part of this race is a paved climb up Mount Constitution. We ran on the same road you drive up. 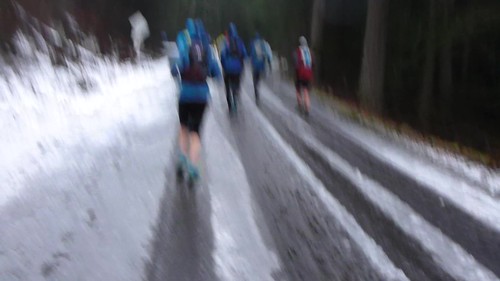 Not much to report here except that I felt fine! I was keeping my heart rate down, sipping from my bottle and chatting with first Sudheer and then Jon. Good times.

Once you summit it's all single and double track to the finish. Yes! These trails are incredible and so iconically Pacific Northwest. They are mostly soft, rooty and even with all the snow we were running through there were so many shades of green! I was having a good time. Here is the best my camera (with a wet lense) can do at conveying the scenery. 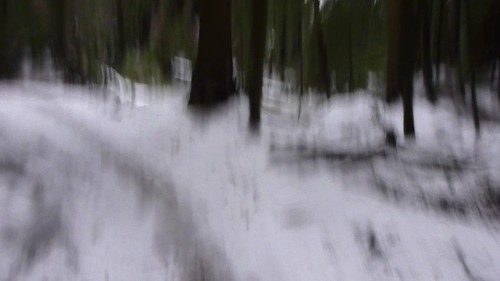 Along the way you pass by some just as iconic sights. For Orcas Island anyway. Like this. 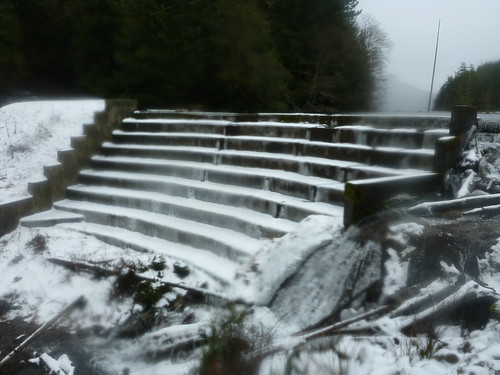 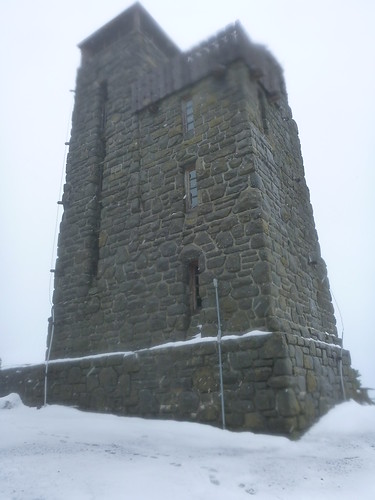 As I ran I was struck by how good I was feeling! I wasn't setting the course on fire or anything but after a while I suspected I was moving close to my best effort here AND I was feeling really, really great while doing it. Nice.

Why was this? I suspect it was due to three things.
After I got off the first climb and down the first big descent I was around way fewer people but every time I thought I was in no man's land I would catch someone else and slowly move on by. That's never a bad feeling.
After the first climb there were only two people that passed me. The first was Mitchel Burbick on the powerline climb. I was near him at the third aid station (which is at the base of the climb) and I exited first. He caught me in short order and after I pretended to keep up for a few minutes he hiked away from me. And between there and the finish he put 15 minutes into me.
The second was some guy I didn't know less than one mile from the finish.
After the powerline climb, which is famous for how steep and slippery it is, you bomb a descent that is always longer than I think it's going to be. At the bottom is an abrupt transition into another tough climb. In my humble opinion, it's this climb that usually kicks people in the balls. Everyone is expecting the powerline climb and then pow!
This was my first time using poles on the Orcas course and I am a huge convert. Ever since I used them at the Eiger Ultra Trail E101 I have been sold on their usefulness. I don't think they help me go faster at the time, but they sure save my back! Which, if I think about it, does actually help me go faster in the long run. And I'm not so ruined after an ultra. I love trekking poles!
After this second "wicked haad" climb is another long descent. I love descents! Especially today. The surface was soft, traction was fine, my shoes were comfy and I was feeling super. I arrived at the bottom (after catching yet two more people) pretty tired but still in great spirits and set off on the last two miles of rolling trail to the finish.
Perhaps one mile from the end I felt something in my left calf. At first I didn't think it was serious but in very short order (perhaps 120 seconds?) it went from a minor nuisance to THIS REALLY HURTS AND SOMETHING MUST BE WRONG. Dang. Maybe 100' from the last road crossing the other guy passed me.
I had intended to film myself crossing the finish line so as I limped along the last few hundred yards I dug my camera out of my running vest. Then I dropped it. No big deal - it's shock and water proof, but when I bent down to pick it up I realized my left calf could hardly engage. It hurt a lot. I walked up the last hill and tried to jog across the line. I almost fell down once from a stab of pain and Judging from what my friends said who were watching me I was limping pretty badly. 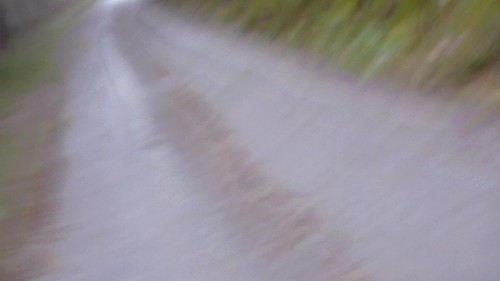 Other than my left calf, I was feeling great! 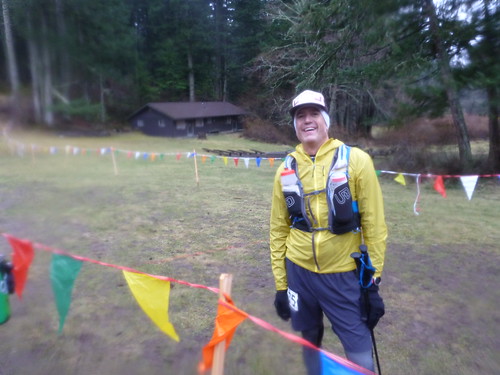 I managed to change my clothes and spent some time cheering on my friends as they finished. I even got the opportunity to pose with the overall winner, Masazumi Fujioka. He and his wife are incredibly nice people and I must have been living under a rock because this is the first time I have met them. 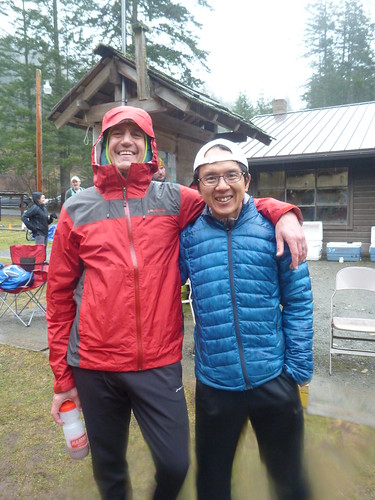 After my recovery drink (which is what you see in my bottle in the above picture), it was time for the extended recovery. This time I had something else in my bottle. 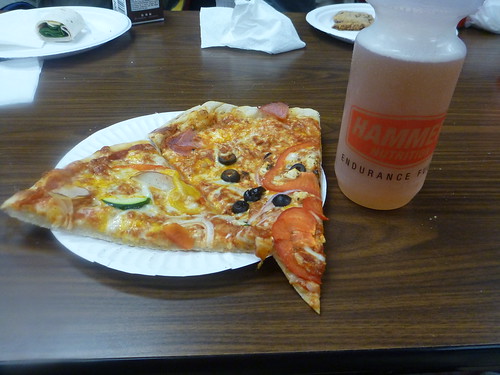 Let's just say the trip back to the Rosario Resort, into the shower, into bed and then back to the ferry and home the next day was v e r y s l o w. Bummer. I never did get the chance to experience the spa.

I booked the appointment with my Doctor and Physical Therapist first thing Sunday morning, while I was in bed actually. And good thing. Monday morning after a preliminary diagnoses from my PT I was getting an x-ray and guess what, I broke my leg. 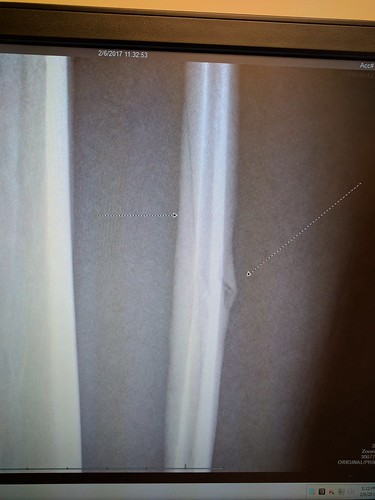 Technically it's a stress fracture of my left Fibula but as you can see, the crack goes almost all the way through the bone.

How did this happen? No idea. I don't recall any event and I never fell down. My PT said, "shit happens" and people break this bone in all kinds of crazy ways. Of course I will get a bone density scan and I am talking to my doctor about Vitamin D but I suspect my density is fine and this was just an accident. It is in fact the first bone I have ever broken.

I'm super happy with my run! I really felt great throughout. I learned some valuable lessons about clothing and fueling which is all good. And learning to exercise patience while recovering is also never bad... I just selfishly would rather exercise!

My best guess as to the recovery process is this.