Way back in 2015 I got invited by some friends to participate in the Ragnar Northwest Passage relay race. It was a blast! So when I heard about the Moran Constitutional Relay, I immediately plagiarized the Ragnar team name (Whistle Tips) and invited those same friends. #doneanddone 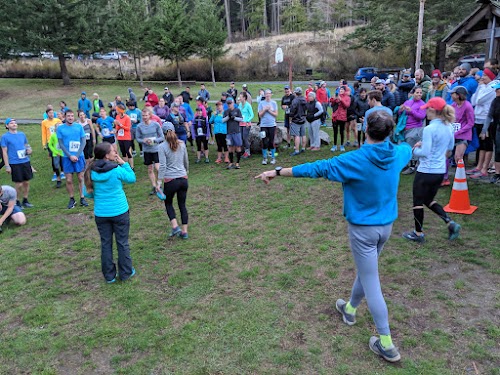 First things first. I didn't know what "Whistle Tips" meant until this weekend, here's the scoop.

This relay race had 12 legs and our team was six people so we each got to run twice. Eight legs were held on Saturday and four on Sunday so two people had to double up on the first day (but then they were didn't have to run on Sunday). Leg length was about 3-8.5 miles but the shorter legs usually had much more elevation gain so the time it took to run each leg was roughly equivalent. Case in point, three of the shorter legs gained about 2.000'.

When we chose our legs I told everyone I didn't care what I get. Guess what legs were left over, the two with the most vertical gain. :) I got to run up the Power Line Trail climb on Saturday to Little Summit and on Sunday I ran up the Cold Spring Trail from Cascade Lake to the top of Mt Constitution. Go!

One trick with relay races is coordinating transportation to transitions. Ideally, it's an exercise in hurry up and wait. You get there a little (not too much) before the runner shows up so you have time to warm up but not so early that sit around and cool down. It can be hard to predict when each person will finish their leg, that's part of the excitement.

I have run these trails several times during the Orcas Island 50k. The climbs I was supposed to "run" up are pretty much 95% hiking during an ultra so I was a little psyched out but freshness makes a HUGE difference. On this weekend I ran every step of both climbs. Yes! And being able to do this was an enormous confidence booster, it made the climbs much less intimidating.

I'll cut to the chase.
I recommend this race! It was well organized, most meals are included and the trails are all amazing.
Here are all my pictures, too bad no one got any of me actually running...! :(
Results
Gear
at 7:38 PM No comments: