Wow! For three reasons.
Thankfully (surprisingly?) I managed to get the job done and not so surprisingly Lucca keeps logging Boston (and New York, etc.) qualifying times. Way to go Lucca! 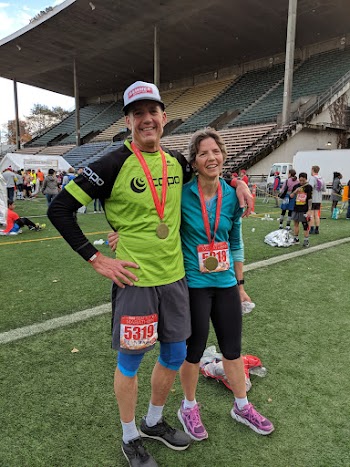 I'll get the Martin stuff out of the way stat so we can talk about the real star here, Lucca.

In my early years of running, I would routinely get overuse injuries. This was in part because I was overusing my body but also because I was not wearing the best shoes for me and because I did not know how to take care of myself. This year my injury was a real accident and not related to running at all. On October 20 I was riding home on my scooter when it slid out in a corner and I landed on my ass. Hard. Say hello to soft tissue injury! This injury was bad enough that I couldn't do anything for one week and could only do light gym work the second week. The third week I was able to ride my bike to work but I couldn't actually run until a little later. This left me just a few precious days to get in some miles and to taper/rest.

Okay, the first thing I abandoned was the taper. After a couple of super duper cautious and short treadmill runs I ventured outside, my progression went like this.

Now for the real story.

Lucca's official 2019 Boston qualifying time is 4:00 but because this race is so darn popular, her "improved" time is 3:55. So we set out with a goal of 3:55 and a dream time of 3:50. Lucca's Marathon PR is just sub 3:45 but she was recently coming off of a three-week break from running so didn't have the luxury of ideal preparation either.

We both agreed that as long as we were seeing an 8:50 pace on our watches most of the time we should be good.

As in years past, I carried all of our nutrition. Not needing to stop at aid stations in ANY race reaps you big rewards and hey, there is no rule that you have to use the nutrition supplied by the event so as usual, I was about the only person looking like I was heading out for an all-day adventure in the woods instead of like someone running a supported marathon. 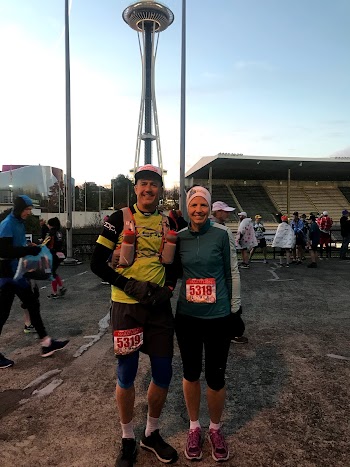 I had two bottles up front and an extra one in back and I was carrying enough gel for both of us. I was also carrying my wallet (which contained my bus pass) and phone so I wouldn't be stranded in the event of a worst-case scenario. One real benefit of wearing a vest is you can use it to stash your clothes and as it happened, we had a freaking perfect day for running. It was a little cold (for me anyway) at the start but by the finish, neither of us were wearing gloves, Lucca had ditched her Buff and I would have been more comfy with one less shirt. Not too shabby for late November in Seattle! Another bonus of carrying your nutrition is you always get to eat/drink exactly what you want. And yes, I'm looking at you Hammer Nutrition, this stuff is SO good.

This year we got into the runner's corral a bit too far back. You would think it's easy to pass people on a four-lane road but not so much when it's this many people. At the very least you need to expend some extra energy weaving in and out of the crowd and it took us all the way down 5th Ave where we finally turned onto the I-5 Express Lanes before we saw the 3:45 pacer. Whew, now we could relax and slowly let them get out of sight again. :)

Last year, because of Link Light Rail construction, the promoters had to abandon the out-and-back on the I-90 floating bridge. To make up for the lost miles they added some (hilly) miles in the Arboretum and to get to Lake WA Blvd from downtown Seattle you had to climb up and over a ridge. I guess some people complained about the extra elevation gain?! Anyway, this year they kept pushing the Burke Gilman route as a good thing.

"That's 25% less elevation gain on the half marathon course and 21% less on the full marathon! You're welcome."

When I first heard that we were running on the Burke Gilman Trail I was 1) horrified (so flat, so boring) and 2) worried that this relatively narrow stretch of pavement would cause real safety issues with running traffic going in both directions. On a trail that is super popular on the weekends! Thank goodness my fears were mostly unrealized. When we saw the lead trio of runners, they only had one lead bicycle in front of them which I thought was insufficient but everyone else was spread out enough by the time they got to the trail to avoid any serious issues. The turn around on the Burke was kind of tight tho...

The route took us from Memorial Stadium south down 5th Ave as usual which is pretty cool. You are running under the Monorail so if you don't watch out, you might run into one of the concrete supports for the track. :)

From 5th Ave we turned onto the I-5 Express Lanes and headed north. On most any other day this would have been a highlight since these lanes are covered and it's usually pissing rain in Seattle this time of year but on this day it was just a few miles of running on really worn out concrete. Not that exciting. Until you pop out into the open, then you have a great view of Lake Union and Gas Works Park. And the race course is FIVE LANES WIDE. We took the 42nd St exit, dropped down one block to the trail and headed north on the Burke Gilman.

Lucca was doing great so far! And luckily, so was I! Our main concern here was just not going too fast. We still had the 3:45 pacer in sight but it's tricky to slow down just a few seconds per mile, especially since our GPS watches were telling us we were running anywhere between 8:00-10:20 pace. Not so helpful.

Running on the Burke was thankfully not nearly as bad as I anticipated. I was predicting a massive, soul-sucking experience mixed with chaos from all the race and recreational traffic but luckily my imagination was (as usual) overly active and running along with Lucca was pretty fun. We sipped, snacked and chatted our way out to Magnuson Park and then back to Fremont. On the way it was a thrill to see David Papineau who was running his 50th marathon on his 50th birthday. Boom! He was easy to spot due to the pointy, sparkly birthday hat he always wears at this event.

Lucca was stellar. I kept track of the elapsed time and whenever I handed her a bottle or gel, she took a sip or gulped it down. And when we had drained our first bottle, she even managed to pull the full bottle out from my vest and swap it with the empty one while we ran. Awesome. I guess I hate taking my vest off while running...

After rolling through Fremont we ran the second out-and-back which takes you a little further down the trail toward Ballard. This section was dull and had it not been for the Hale's Brewery aid station - WHERE THEY WERE HANDING OUT ACTUAL BEER - it would have been hard to muster much enthusiasm. As we ran past this aid station table, I saw some growlers out of the corner of my eye and reflexively my body swerved right toward the table.

Me: "Woah... are you guys handing out beer?"
Hale's Volunteer: "Yeah, but hurry up, they're kinda trying to shut is down..."

By this point, my body was fully and completely locked into our 8:50 ish pace. And I was exceeding my fitness by a LONG shot. In fact, I had not run a road marathon since this time last year and I had not run this long period since the Pine to Palm 100. Yikes!

After stopping to drink that tiny cup of beer I set off to catch Lucca. Oh. My. God. It was everything I could do to run at an 8:00 pace for the quarter mile or whatever it took to catch her. I'm just glad I was able to!

I had purposefully not been obsessively checking my watch every 30 seconds so when I glanced down near the top of the bridge with just over one mile left to go and with about 10 minutes to go before we hit 3:50 I got pretty excited! As we started to descend I tried to calmly tell Lucca that I thought we could make 3:50.

If you have ever been close to your limit you know it's easier said than done to increase your pace. But I wasn't worried, I figured if we just didn't slow down 3:50 was in the bag! I just wasn't going to advertise that fact too loudly since it's never over till it's really over.

Then we turned right off Aurora. And we were faced with a 3-block climb. Oh no...

Lucca dug deep. Eating and drinking were not going to help at this point so it was just a matter of pushing harder and gutting it out. We did slow down but we did not walk! And boy was it nice to finally turn left and see the entrance to Memorial Stadium ahead instead of the traditional last hill the old course had.

I tried to gradually ramp up the pace on the descent and Lucca was totally game! As we entered the stadium I was moving about as fast as I could and Lucca was right in front of me. I could see the clock above the finishing arch and right then I realized we were going to be a few seconds short of 3:50 but only seven! 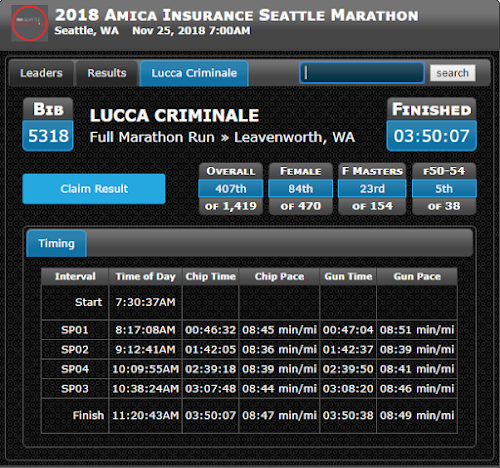 You want proof that Lucca pushed hard? Here you go. Magically, her husband Bil caught this on camera. 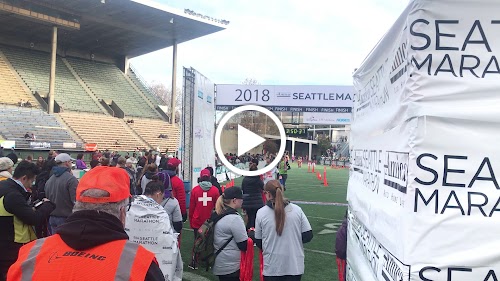 But as soon as Lucca threw up (and it wasn't much at all) she was fine. Way to go Lucca!

What an awesome/amazing tradition! These past few years I have just been signing up for the Seattle Marathon as soon as possible because that is the least expensive price but more importantly, I'm 99% sure Lucca and I will be on the starting line again. Even if I get injured.

After the race, Lucca and I limped around for a bit and soaked in the relative warmth. It was a spectacular day! Then Lucca and Bil walked back to their hotel to get cleaned up and to take the train home to Leavenworth. I put on some warm, dry clothes and walked over to Feierabend to meet some friends for beers and brats. Yes, that walk felt good. Oh yeah, so did the food and drink.

Here's to another year of running with my sister! And here's to Lucca for being so darn rock solid throughout and being willing to dig that deep at the end. Did I mention we had consecutive race numbers? That was fun. And hearing the race announcer mention both of us as we approached the finish - while pronouncing "Criminale" correctly - is so cool.

Here are all the pictures and videos.

Results
Nutrition (before)
Nutrition (during)
In total, the two of us consumed the following.
Nutrition (after)
Gear
at 4:00 PM No comments: