No two ways around it, cycling is a selfish (and expensive and time consuming and addictive) activity. It takes so much more time than running or going to the gym. Bicycles (because you will need more than just one) are exponentially more expensive than any running shoes or even a home gym and soon you will find yourself traveling to far off lands under the guise of attending a 'training camp' which is just another way to justify the airfare, the food and paying an airline to transport a big box. Anyone bitten by the cycling bug and thinking of getting into a relationship - with another person that is - might want to consider this cyclist's pre-nuptial agreement first.

Still, I love it. There is something about the speed and efficiency of a bicycle. Plus you can eat while you ride!

Training Basics
Because I get asked about this quite a lot, here are some fundamentals in case you want to add a bit of structure to your riding. No, I'm not a coach and no, this is not the best for everyone but hey, it's a start.

Racing Tactics
If you want to understand what's going on and maybe race a little smarter. Here's to the competitor in all of us!

Here is what I looked like back in the mid 1980s. This is during the Wenatchee Stage Race road stage. Although I might look like I'm off the front (which is what I always like to tell myself), the reality is that I just got dropped from the lead group and am in limbo near the top of the Malaga Road Race climb. 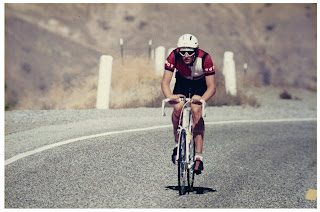 Since I started racing bicycles in 1982 I have competed on the road (on single bikes and on a tandem), on the track, on mountain bikes and in cyclocross. In 2011 and 2012 I rekindled my enthusiasm for mountain biking by racing in the single speed category. I also realized I enjoyed longer events which culminated in some wins and several good placings in 100-mile races in the single speed category. Good times.

I enjoy few things more than a beautiful century or an epic MTB or gravel adventure. I guess this is why I have ridden RAMROD so many times and why I have been drawn to events like La Ruta de los Conquistadores and Trans Portugal. The later of which I enjoyed so much I went back and rode the course with my wife on our MTB tandem in the Trans Portugal Tour. Twice.

I quite racing bicycles in 2013 to pursue running ultras but I will never quit riding. And I still own a lot of bikes.

I was recently honored by getting featured in a "RAMROD Story" that detailed the record-setting ride Rick Benson and I did in 1988.