Oh man, some people sure do LOVE their marathons... and apparently a ton of people also love downhill marathons since qualifying for prestigious events like Boston or New York is such a big deal. Hence the REVEL series where every single event seems to lose elevation. This particular event loses FIVE THOUSAND FEET. I know, right? #mindblown

I signed up for this not to go PR hunting, rather I figured a long, downhill run would be great training for big trail races. Turns out it was. And I did get a marathon PR...

Also, just a few weeks ago I said I had run my first road race in years, now I have run two in the same year! 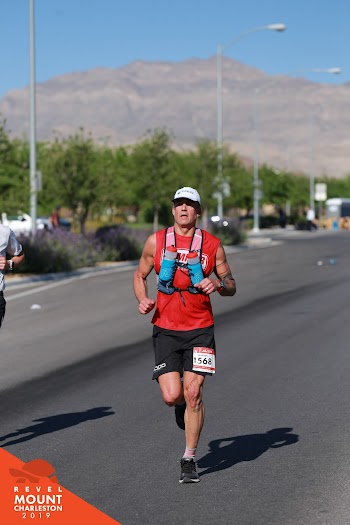 <rant>
I'll just get this out of the way right now. If your race is so freaking popular that you need to keep tweaking the qualifying time, why don't you require people to qualify on a similar course? Similar in terms of distance obviously, but how about also similar in terms of elevation lost or gained? Seems so basic to me and I don't even play a race promotor on television...
</rant>

And yes, I know those rant tags are an old (and tired, and worn out) joke, but so am I. Suck it.

I was worried that since this race is just outside of Las Vegas it would a scorcher! I needn't have. Not only were the temperatures really comfy (48 degrees at the start and about 75 degrees at the finish - for me anyway), the pre-race announcement said that in past years they have had snow at the start! Yes, it did climb up into the low 90s later in the day but unless you are going to take over four hours and assuming you have a hydration plan you should be good.

Still, the organizers didn't take any chances. The start time was 5:30 AM. And since you need to get shuttled up to the top of Mt Charleston, the bus from town leaves at 3:30 AM. After some rudimentary math, you'll understand why I had to set my alarm for 2:00 AM. Ouch. Of course being in Las Vegas I briefly entertained the thought of not going to sleep at all... luckily that didn't last long. I think the "nap" I got was the smart call.

Pro tip: for a downhill marathon, there are a few (read: more than two) significant "little" climbs in the first half of this course. It is not all downhill in other words.

My plan was to shoot for sub 3:10 but as the 3:05 pacers (there were a pair of them) slowly eased past me my plan changed. :) I know, classic. But in my defense, I have never run a marathon with this much elevation loss so didn't really have a good idea of what I could do or could not do. Plus, I have only ever run two marathons for a time in my life. The first was WAY back in 2012 and the second was in 2016. Suffice it to say that my marathon pacing was one big, fat guess.

6:30-6:40 miles had never felt so good! I could have had a freaking conversation out there. Heck, I could have made a sandwich while I was running. Easy peasy.

On the third(?) little climb I felt like running was not quite as easy as it used to be. But so what, right? By this time I had left the 3:05 pacers in my rearview mirror but I was still trying to convince myself that I was being cautious as the 3:00 pacer was nowhere to be seen and while on the downhill RUNNING WAS STILL SO DAMN EASY.

Here's another pro tip: the elevation profile of this race is misleading.

From this picture (which never has enough detail), you might assume (as did I) that the course doesn't really flatten out significantly until about mile 20. Oops, it doesn't feel like that. I could have sworn the grade changed quite a bit around mile 16. And it also sure felt significantly flatter way back when you pass the half marathon start. :( But if you're going to believe science (and who wouldn't do that?), my Strava elevation profile confirms what the race advertises, namely that the course doesn't really flatten that much until around mile 20 or even mile 22.

So be ready for it to feel loads flatter way earlier than you think. Just saying.

As I cruised past the halfway point I looked at my watch and I was still crushing it at sub 6:50 pace. But I was starting to get concerned that this wasn't going to last. I decided to turn this into an experiment/training run and see if I could go under 3:00. All I had to do was average under 7:00/mile from here to the finish. :)

Well with about six miles to go that still seemed possible but I'll cop to counting one or two proverbial chickens. Then at the mile 23 aid station there is a hill. And I was walking. And I started to feel like I look in this photo. 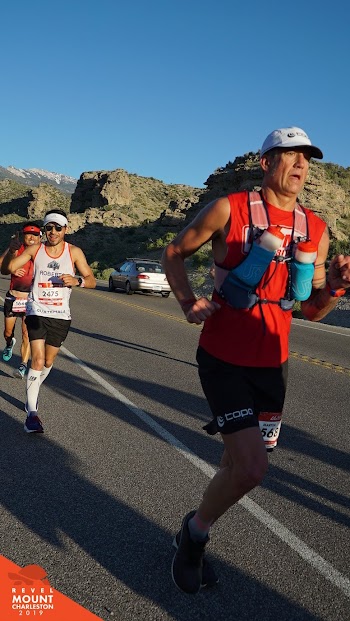 But that's what experiments are for, you need to learn. Now I was just trying to fall apart as little as possible/as slowly as possible. Every time I did run I kept telling myself that 7:30 pace or even 8:00 shouldn't be this tough but it was and I could only manage something around 8:30. And I could only run about .25 miles before I had to walk a few steps again. Wow, when the end comes, it can come quickly.

Somewhere between this last aid station and the finish the 3:05 pacers passed me back.

Finally, I saw the finish line arch which was at most .5 miles away. But even then I had to walk one more time before I could run it in.

With about 50 meters to go you do a tight u-turn and I felt one of my legs cramp. Apparently, that finish could not come soon enough. :)

Whew! My only regret is that my heart rate strap decided today was a good day to take a vacation. Darn. At least it's not uncomfortable. Otherwise, I had a ton of type 2 fun today.

At the finish they took great care of the runners. There was a massage tent, cold/wet towels (I took an incredible feeling sponge bath), lots of cold water/coconut water/chocolate milk, and your number bib included a coupon for one piece of Dominos pizza, one pint of beer, and one slice of pie. I skipped the (sweet) pie. You could hang out pretty much as long as you wanted and then you could collect your drop bag from the start and board a shuttle back to the mall. Which is where Shelley picked me up. Yeah! No Lyft ride back home!

Here I am waiting at the mall in a much better mood than I was with two miles to go. 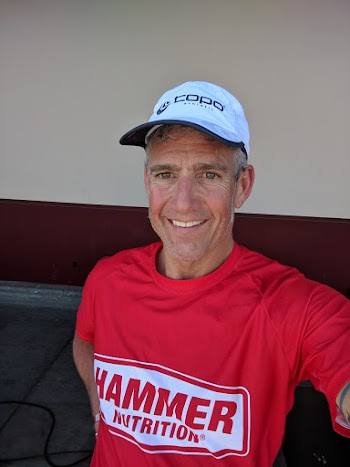 And whatever happened to the 3:00 pacer? I never did see him out on the course after the first mile... Turns out he went out way too fast and blew up himself! I heard he finished in around 3:08 or 3:10. I bet there were some angry people. Justifiably in my humble opinion. If you're gonna pace (and thanks to all the people that do!), the time should be verifiably well within your wheelhouse and not some sort of overly optimistic personal goal.

Things I learned and reinforced.
Here are all my pictures.
Results
Nutrition (before)
Nutrition (during)
Nutrition (after)
Gear
Stryd power file
at 4:00 PM No comments: