Kind of ran out of motivation/time/something today so watched some television and hooked myself up to my Compex Performance and ran a strengthening program. Done and done.

Email ThisBlogThis!Share to TwitterShare to FacebookShare to Pinterest
Labels: ems

I almost took another day off today. Motivation is gone.

Luckily Jon Robinson gave me a shout and asked me to go running so I went.

I felt like crap! Right from the start I felt like I was breathing through the world's smallest straw, so much so that I was wheezing while my heart rate was just 125 bpm.

We slowed down a bit and I recovered some but every time our pace would get close to 8:00 I was in a world of hurt. Shoot. I was laughing, Jon was just going for a shakeout run prior to racing the White River 50 Mile and I couldn't keep up. Sigh.

My ride home was very slow.

Wow, what a difference a couple of days make.

Tuesday I was on fire! Wednesday the motivation ebbed so I took a day off. Last night I met my friend Tony Callen at Fremont Brewing and that was the beginning of the end for me. I took the bus to work today and still felt like crap when I walked home. Some people learn things much slower than others.

Great day! I was surprised I had this much energy but my lunch run was super mellow and I might still be coasting from all that speed last weekend. At lunch I ran with Steven Kurle who is always great to talk to and great company.

At the stairs I felt slower than usual but I still got in 13 flights in 45 minutes which is what I have been doing when I feel super so go figure.

At Fleet Feet Sports Seattle we started pretty mellow but then I was solid on the hill and picked up the pace just a bit in the last mile. Solid in other words.

Technorati Tags: bike commute,single speed
at 8:41 AM No comments:

Got a text from Todd Morse Tucker last night asking if I wanted to run today. I was SO close to saying no but in the end I'm glad I accepted the invite.

I think today was my slowest time on this loop but I finished feeling better than when I started so that's a good thing, right? I didn't have any pain or specific issues from the weekend, just overall tiredness.

I love Shelley. Any event that starts with me finding a note like this in my bag of race nutrition is going to be good. 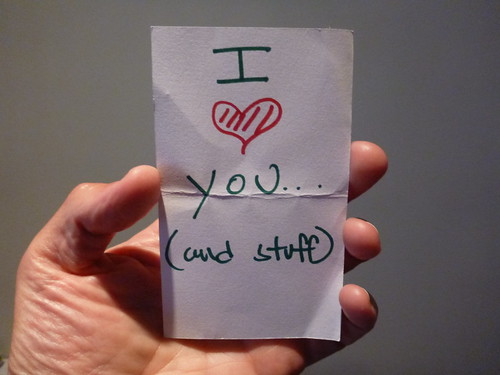 Why was it 'ultra style'? Read on to find out.

The Ragnar Relay races are obviously hugely popular! Not sure how long the Northwest Passage edition has been around but each team usually has 12 runners and there were about 350 teams – if you do the math that is a boatload of runners.

How did I end up here? It was a classic friend-of-a-friend story. The Whistle Tips (the name of my team) had one of their members drop out because of an injury. They asked a friend of mine (Bill Huggins) if he'd like to run. Bill was not free but recommended me. Bingo.

Like most relay events, this is a VERY BIG DEAL and requires a LOT OF VOLUNTEERS. This event is 200 miles in total. The way most teams do the run is to divide the team up into two vans; legs 1-6 go in one van and 7-12 in another and you keep switching vans until you complete all 36 legs. This means there are five massive transitions where you are not only handing off from runner to runner but also from van to van. It was at this first big transition that my van (van #2) started out. It was a zoo.

There were long lines where each team had to check in. 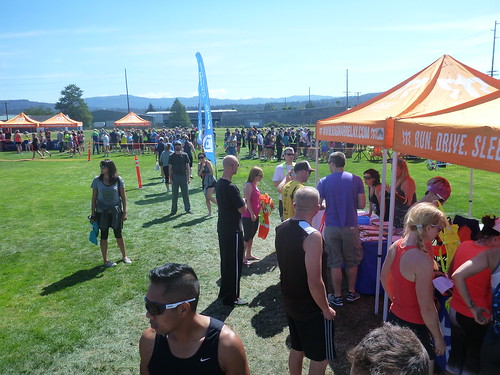 We had to not only get our safety gear approved (reflective vest and headlamp), we also had to watch a safety movie. 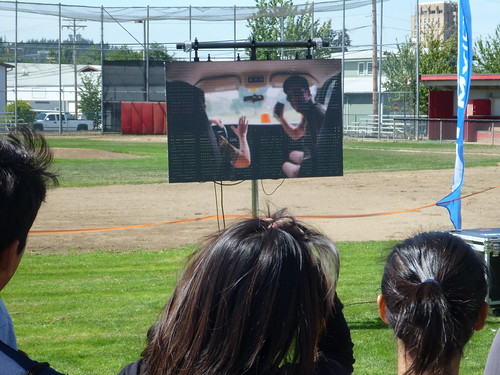 Imagine an 80 degree day, you're outside, and Taylor Swift is blaring on the speakers. This safety movie was not super effective.

ASIDE – why do these safety movies always try to be comedies? This one starred three fake cops, two of which (men) were bumbling clowns and one of which (a woman) was the sensible one correcting all their mistakes. Slapstick abounded. One word: riveting.

I learned that everyone needs to decorate their van. If you don't you get made fun of and if you do your van gets tagged by other teams because then they know you are in the race. It's a real win/win. Truth be told they would know anyway because every vehicle has to have a Ragnar sticker on the back but I didn't figure this out until later. Apparently it's also a requirement of every team to list the names of each runner on your van. 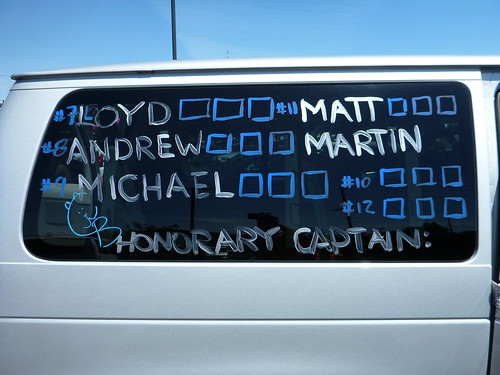 Next to each name is the leg they are running. If you look closely, you will notice that there are two legs next to mine. Just two days prior to the race one more Whistle Tip had to drop out due to a work commitment and the rules state you can have different people make up each of the three legs or one person run them all. Of course I volunteered for the later.

After checking in, painting the van and taking some pictures of other vans (sexual innuendo or just straight up dick pics were the norm this year) we took the first team picture. 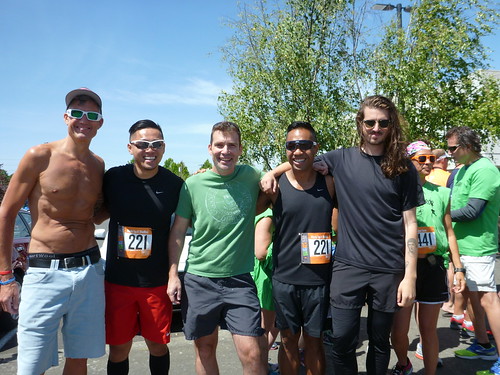 At the start, each of the van transitions (where we were now) and at the finish, they had these giant, inflatable arches. Everyone was cheering all the runners on and it was really cool. The 'baton' you handed off was a bracelet with a metal core. You could straighten it out and if you slapped someone's forearm, it would curl up and wrap itself around the wrist. Slick! Here is how that works.

How did it go? It was a blast! Yes it was hot and yes it was tough to get rolling on some of my legs but my team was so positive and van #1 was rock solid so we never had to worry about the other half of our team. Here are some highlights. 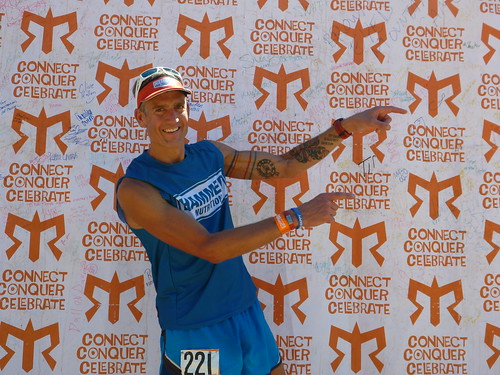 The finish line expo explains why this event is so successful, every other tent was selling Ragnar paraphernalia and I was not immune – I purchased a visor. Unfortunately there were no showers at the finish but that was okay. You got one beer ticket and had to buy your own food. At least I managed to acquire two additional tickets. Thank you Sierra Nevada for supplying the beer.

Thanks to the Whistle Tips for a fantastic experience! 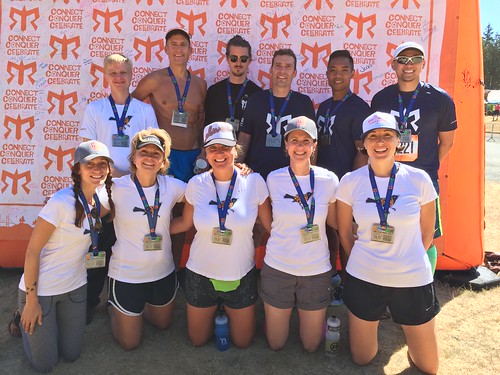 To anyone contemplating running this, I recommend it. For sure it requires a bit of effort to organize everything but from my perspective it was very worth it.

I received some new Brooks Launch 2 shoes a few months ago but had not used them yet. I took them out for a couple of runs last week and that was all it took – this is my new road race shoe! It isn't just the lower weight, these things feel incredibly fast. AND they feel substantial enough for a road marathon! I'm psyched. They performed really well.

Relay races where you need to go hard multiple times are all about treating each leg like it's a one-day event. You need to fuel properly in advance of each leg, you need to warm up, you need to hydrate, recover and then repeat the entire process while adjusting for the time of your next leg. Having gear and nutrition that works so well takes a giant load off your mind. My shoes and Brooks shorts were fantastic and so comfy – zero issues there. Regarding nutrition I'm so grateful to have support from Hammer Nutrition. They make products for every part of the day and every stage of the workout. I was able to eat and drink without concern for whether or not I was having something that worked or if the amounts were correct. Done and done. Omnibar provided the savory snack during significant down time. Thanks also to The Balanced Athlete for the ongoing support, the warm, fuzzy jacket that turned into an awesome pillow and for the help in getting my Garmin Fenix 3 which has been an amazing running watch/smartwatch.