My how things change.

As recently as 2007 I was quick to declare that running was for the birds. Or more accurately, people who had not yet discovered the divine efficiency of riding a bicycle. Plus it's slow. That year Shelley ran a half marathon and for a change I ended up supporting HER leading up to and during an athletic event instead of the other way around. And I'll be damned if the energy of the race didn't speak to me.

Fast forward one year (that would be 2008 if your math skills are only rudimentary) and here I am with a new pair of running shoes training for my own first half marathon! Man was that hard.

In 2009 I did some group runs, participated in my first track workout (meaning I just ran around a track with very little structure), started to dabble in trail running (and wearing a headlamp), got a fancy hand held bottle and entered two half marathons. To cap off the year I joined some ultra running friends for a 15 mile trail run known as the Fat Ass. Kind of a casual walk in the park for them but a new milestone for me.

In 2010 I signed up for three half marathons, did a couple of trail races, purchased my second pair of road shoes AND some real trail running shoes and I got my first running knee injury from ramping up the miles too quickly and not taking care of my IT band. What a rookie (which is obviously exactly what I was) mistake. I was only able to complete one trail race, one 15 km race and one half marathon before my injury forced me to stop.

At the end of 2011 I had a bad spill on the bike which prevented me from riding altogether for a while. What to do? Run. Thankfully that activity did not hurt. By this time I had almost totally abandoned the pavement in favor of the dirt. I participated in just one half marathon and then impulsively decided I would like to run a marathon. On trails. After a couple of 17-mile shocks to the system on Tiger Mountain with a good friend I entered a 20 mile race and got lucky. Two weeks later I completed my first trail marathon. Ouch. After recovering from that experience I entered my first ultra in early 2012 and exceeded my wildest expectations.

What's next? Dare to dream I say. 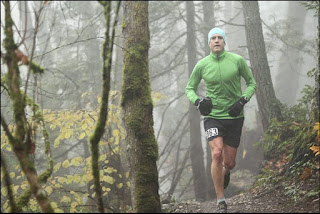 There is definitely something appealing about trail running. I mean you are right there, in nature and all. Plus it's not that slow once you get used to it.