Finally. It seems like all of my friends have run the White River 50 Mile Endurance Run multiple times. Without a doubt, this is one of the most iconic events in the Pacific Northwest and it always attracts an elite field but it has not fit into my calendar so far... until this year. Better late than never. #worththewait

Here I am full of naive optimism at the start. 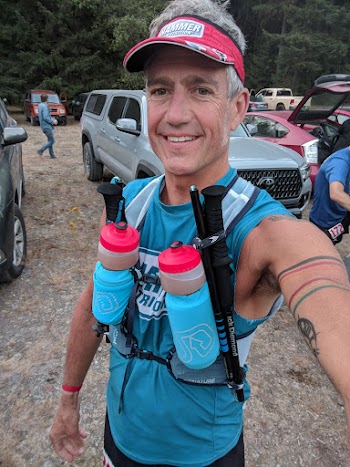 Not only is this a super course, the Seattle Running Club (my running club) has a long history with the event. We have been associated with this race in some fashion since its inception and we still treat it as one of "our" races and promote it and staff the biggest aid station at Buck Creek (nominally half way). I've volunteered at this aid station twice and it's a blast! Huge thanks to Scott McCoubrey for putting on this event every year.

The conditions were pretty awesome. Sure, it was warm but that's expected. And although some people called it "hot", I don't think it was an extreme day by any means. Hey, it's summer after all! This is what we all say we miss during the other half of the year. One thing that was unique this year is there was a recent forest fire. At one point we were running through some pretty charred trees. Every tree trunk been denuded to the point where only the larger branches remained and some of the smaller trees looked really pitiful. Not only were they black, the heat had cooked them to the point where they bent around in a semicircle. Sometimes there was race flagging tied to the tips of these bent trees and it looked like something from The Lorax. But artistic in a way, with these bright, pink ribbons bringing some color to an otherwise totally black and gray landscape.

When the weather is nice and I'm pretty certain it's not going ot change I like to travel light. Since I didn't need any clothing, I wore the lightest vest I own that will still carry two bottles. It might not seem like much of a difference, but not having that extra bulk is awesome. Speaking of bulk, I was blown away by how many people I saw with nothing more than one hand-held bottle! In the heat that seems risky to me but that's what all the elites carried and for the most part, they all did really well. I guess when it takes you that much less time to get to every aid station, you don't need as much fluid? Or something...

Today was a learning experience for me. Here's hoping I can remember the lessons. My results have been really good this year. Not because my training has changed dramatically but because I finally have my nutrition and pacing dialed. Today I had to take some additional things into account.

You'd think that since I have used Hammer Nutrition products for over two decades that I'd have my nutrition sorted ages ago. Not. When I was younger I could tolerate bigger mistakes and I was just cycling. I'm convinced the impact of running, coupled with the sustained higher heart rate is more difficult to fuel for. Last year I got close and this year I have gone to not eating anything for three hours prior to races and fewer calories in every bottle, that was the ticket. Hammer Nutrition has been extolling both of these philosophies and I finally took them to heart. Guess what, they work. :) That is one thing I really like about Hammer, they stick to their philosophical guns and only change when there is a science-based reason to do so. They have been advocating "less is more" and as long as you don't overdo the "less" part, I agree 100%.

Until this year my running pacing was always subjective or based on "feel" (perceived effort). Yes, I would use a heart rate monitor but that is subject to all kinds of influence. That all changed when I got a Stryd running power meter. Having used heart rate and power on a bike for a long time, I have had my eyes open for a good running option for ages but all that I saw on the market was shite. That was until I saw Joe Gray had been sponsored by Stryd. I totally respect Joe and feel he would never partner with anyone/anything that he didn't believe in so after contacting him and asking some questions about Stryd, I got one. It freaking works! Power is the most objective indicator of how much work you are doing and it is not influenced by how tired you are, if there is a headwind, the temperature, etc. Plus, the heart rate you can maintain will change over time (as your run progresses and as you get older) so if you want the most useful numbers, power is where it's at. Having used Stryd running power all year here is what I have observed.
These days I am very familiar with my max 50k power. The mistake I made today was assuming I could stay pretty close to that over the course of 50 miles. Oops... For a 50k I can sustain around 285 watts. If I dial in that number and hold it, I'll have an excellent result. I started out around the same power in this race and pretty quick it climbed above 300 (sometimes above 320) during sections on the first ascent. I know from experience that a few minutes over my target isn't going to kill me in an ultra but today it was too much too soon. Too much for the distance and too much for my "training" which hasn't really been training at all and more doing what I want since my last race. My average power for this race was 235. And I blew sky high on Skookum Flats. In retrospect, I think I need to target something around 250 or 260 for a 50-mile event, that coupled with some actual training and my target time of sub 9:00 would have been manageable. As it was, I only missed it by 10 minutes and I think (read: know) that I lost all of those minutes in the last seven miles.

I was on target for an 8:45 ish finish at halfway and at the top of Suntop 8:50-9:00 still seemed doable. I could feel myself dragging going up that last little climb to the aid station but then the descent from Suntop took way more out of me than it should have. I love descending and usually, my legs can handle it pretty well. I started this descent at 7:30 pace but within one mile I was moving at just under 7:00 and held that pace to the bottom. Where I promptly had to walk! That's when you realize it's too late to bounce back and the run turns onto damage control... Which was a bummer since Skookum Flats is an amazing trail! It's so much fun to run, not so much when you are surviving.

My power went roughly like this today.
Usually it's ME that passes people in the last 10 miles. Today I got passed by four people on Skookum Flats. :( I suspect I walked half of that trail. Pacing, pacing, pacing.

In spite of me turning this into a bit of a death march, there was tons of positive today.

Huge congratulations to all the SRC runners who toed the line today, there were 40+! And to Arthur Martineau who beat me today while describing his run as a "shit show". That guy has buckets of experience. And to Keith Laverty who got 3rd overall. This kid can run!

Most likely I'll be back to try this, and sub 9:00, again.
Here are all my pictures.