I couldn't have picked a better day for a road race. It wasn't too hot, it wasn't too cold, it was dry, I had tons of friends and clubmates running in the Mercer Island Half Marathon, and there were even friends by the side of the course cheering us on. Nice! 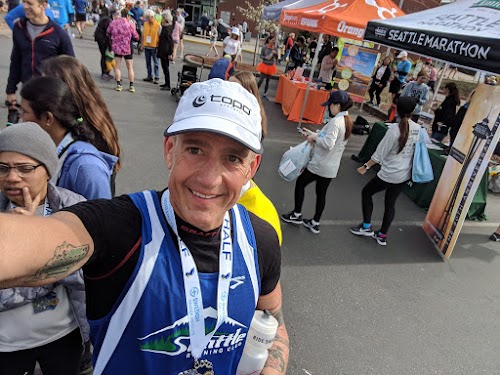 It has been years since I have run a half marathon or any road race for that matter. I got into ultra trail races specifically because it was not necessarily about going fast and more (for me) about adventuring. Turns out it's still fun to try and go fast every once in a while.

Pro tip: Mercer Island is not an ideal course if you want to shoot for a PR, it's hilly! What's funny is I have ridden my bicycle around the island a thousand times and I've even run this loop a couple of times but at race pace, the hills are much more noticeable. :)

I rode my bike to the start (of course) and so got to avoid the traffic jam and parking hassle. I was off to a good start. While I was changing my shoes in the parking lot I stumbled on Wick, it has been ages since I have seen this guy and it was super to catch up.

I almost took a vest with me... then I realized I was being an idiot (and would look like an idiot) and that this was only 13 miles so I went with a handheld bottle instead. But I still carried all of my nutrition! Some things are best left unchanged.

It seemed like half of my running club (Seattle Running Club) was lined up in the front row, these people are legit fast! And there is always a big contingent of Club Northwest runners at this event.

The start of this course is downhill so when I first glanced at my watch I was right on target pace. Then it flattens out. I was still on my target pace but we had only run about two miles! Then it kind of drags uphill just a tad. Now I was no longer running my target pace and I was actually feeling like crap! So I slowed down just a little. Another mile or two later and my crappiness had intensified so I slowed down again. :( Not the auspicious outing I was hoping for.

As we headed around the island I kept looking for carrots but each one either ran away from me or passed me. First, it was Trisha Steidl, then this tattooed woman in a Club Northwest singlet that everyone knows except for me. Then some guy in a red singlet. By this time I felt like I was just jogging along except I was still massively short of breath. How is that even possible?

Finally, about halfway around the island, I saw this man in front of me that appeared to be in my age group. I resolved to (hopefully) not to let him drop me. Motivation!

The only problem was he would fly down every descent! On the climbs, I would slowly real him in and then he would repeat this surge on the next downhill and open up a gap again. In my mind, I fancy myself a reasonable descender so this was baffling to me. But I guess pavement and technical trails are not the same things. And, I'm probably not as fast going downhill as I think I am. :) As we got closer to the finish I kept visualizing the course up ahead so I would know when we got to the last significant climb. I finally resolved to make my "move" on the second to last hill, the one that takes you up and over I-90.

The approach to this climb is a long downhill so I pushed a little more not to let this guy get too far ahead of me. It worked and we started the climb less than 50' apart. And by the top I had a big lead. Whew! One more short descent, and one more short climb and I was done. On this last hill heading up to the Mercer Island Community Center I heard Ben Luedke cheer me on, that was awesome! 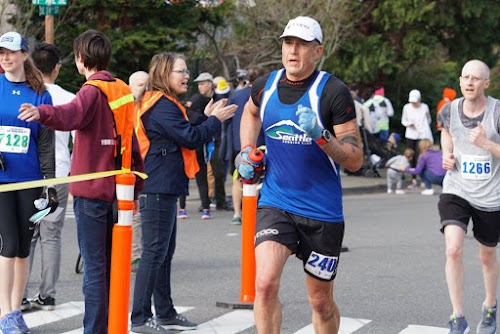 I'm not positive if the guy I was racing was in my age group or not but I barely won my age group so if nothing else he really helped push me. Thanks random guy!

In the end, it's obvious that I did not slow down nearly as much as I thought I did or I rallied way more than I thought I was capable of in the second half. There's a lesson buried in there somewhere (maybe something like start slow, finish strong) but whatev... :)

When I told my sister Lucca about my run, she let me know this race was her first running race ever. At that race my mother Ulrike was pacing Lucca. Ulrike was pretty fast in her own right and very well known in the running community. As they would run past supporters and friends and volunteers people would say things like, "Ulrike, what are you doing way back (in the pack) here...?!" It did make me smile.

Results
I was just 1:10 ahead of 2nd place and my average pace was 6:56. Way to work the tea leaves coach.
Nutrition (before)
Nutrition (during)
Nutrition (after)
Gear
Stryd power file
at 2:00 PM No comments: