For someone that professes to be an ultra "runner", actually running for extended periods of time is one of my weaknesses. #irony

I'm used to (and my body prefers) ultras that include hiking, technical trails, and perhaps just a slower average speed? Well, the Javelina Jundred is NOT one of those "slower" races. For the 100 km event, you gain a total of just 3,900' and only 5,000' for the 100 mile! So why is the finishing rate consistently around 50%?! Because there is a lot more than vert to an ultra.

Here I am about 10 minutes prior to the start. Things are looking up! 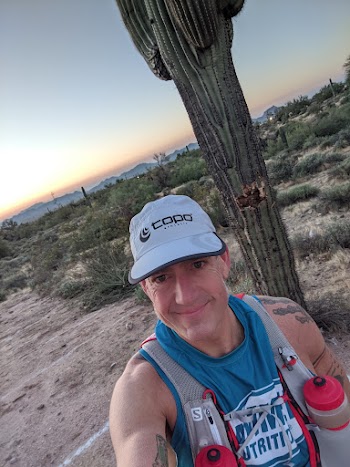 Gosh, I think the Alaska Airlines Dawg Dash is my first 10k ever and other than a 5k I ran years ago in Seward Park, it's my shortest race in a very, very long time. And you know what? Short is fun but it's also not easy. :)

This was my first hard effort after dropping out of the Whistler Alpine Meadows 100 mile race (mostly) due to Plantar Fasciitis three weeks ago and it was so awesome to be able to push the pace again. And just to run! 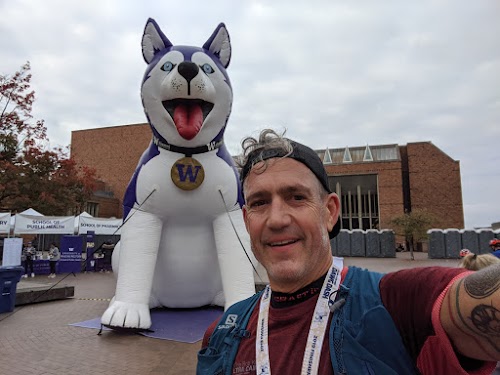 I've been healing up from various ailments lately. About five weeks ago I pinched a nerve in my neck/shoulder that has taken ages to calm down and it still has a ways to go. Four weeks ago I got struck down with Plantar Fasciitis and one week ago I took a tumble off my mountain bike and bruised my ribs. All three of these things were "fists" for me and here's hoping I don't get a second opportunity to experience any of them as they all suck.

But I've running for about one week now and in a moment of exuberance/frustration I signed up for this race. Turns out it was a great idea.

Feeling like I needed to log some training miles I jogged over to the race. Quite by accident, I timed my arrival perfectly showing up about 20 minutes prior to the gun. This was just enough time to hit the bathroom, drop my running vest off at the gear check, have a gel and a sip of water, and stroll leisurely over to the start line. Go!

Wow, it has also been a very, very long time since I have run with 1000 people! What a zoo. I didn't start in the front as I had no idea if I could go fast so I had to slalom in and out of people for almost one mile in order not to get slowed down. It was kind of like playing Frogger.

After that first mile when traffic finally started to thin out and I thought my pace was something I could sustain, I notice a man who looked like he was in my age group some distance ahead of me. I figured why not try to hang with him...? So, of course, he immediately proceeded to put time into me.

Oh well, I was just having a blast running around the Univesity District. The course was super fun! We ran up to Ravenna Park, down through the park and then along the Burke Gillman Trail, and then snaked our way back and forth through the UW campus for the second half of the race. This is not a flat course and there are a lot of corners, I like that. 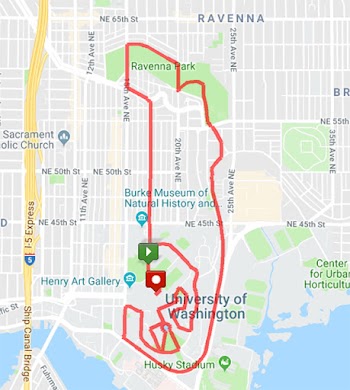 Around the mile 3 sign I saw this guy again. But I couldn't go any faster! So I just tried to hang on and hopefully, he would fade some. In retrospect, I managed my pace pretty perfectly. I was only passing people and never got passed. And with about 1 km to go, we hit a long, draggy hill and I managed to ease past this guy and then held him off on the last descent to the finish. Yes! There is always a race within the race and if only you know what the rules are it dramatically increases your odds of winning. :) Turns out he was not in my age group, he was younger. Still, he was an awesome carrot.

It was exciting when the 10k and 5k runners merged around mile 4, we entered campus and suddenly there is a stream of runners coming at us from the left. You had to pay attention!

The start was right next to Red Square and the finish was in Red Square. As soon as you crossed the line you got your finishers medal and they had a tent of laptops set up so you could check your results stat. the guy I was chasing for the whole race literally went straight to a computer and looked up his result. But then so did I once I saw this was possible. :)

I'm pretty sure I went as fast as I could given my current fitness and injuries. I didn't hurt myself and I had a good time, what a relief!

After the race I hung out for a bit, drank some water, ate half a banana and then jogged home. Oh man was that a slow return trip but you know what? It was also fun! I paid zero attention to the pace and just reveled in the fact that my foot was not hurting. And I had music so all was good. On the way home I just followed my nose and also didn't worry about the route. Good times.

I did see one sad thing running back tho. :( 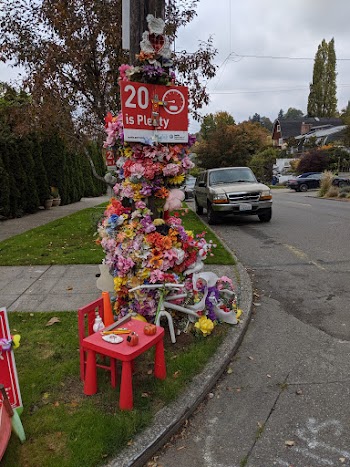 For those of you that don't know, these white Ghost Bikes are memorials to cyclists that have been killed. All the flowers make me believe this was recent. And it's a kid's bike.

I used to ride my bike to races pretty frequently, maybe I should sign up for some more local running events.