Back is the incredible.
Dumb animal.

That's right, last year was my first time to suffer this nonsense and so when Tom sent out the email about doing it again I was like, why not? My junk had not been numb in a good long time and the forecast was for sun so count me in. Some of you may have heard about the 100 Miles of Nowhere. It's (just one way) that the Fat Cyclist raises money for the LiveStrong Foundation. From my perspective it's totally unique and I like new challenges on the bike. So this last Sunday we did it again.

The original goal was to ride 100 miles on rollers but the event has morphed into riding 100 miles pretty much anywhere that dos not actually involve going very far. I hear people are doing laps on a track, riding a trainer indoors and even going to extremes like completely disengaging the resistance unit from their trainer. Hey, it's all in the name of raising money for cancer treatment and awareness so it's all good in my book. We opted for rollers and since one of us has an amazing facility we decided to ride outdoors and at least enjoy the sun since we were not going to enjoy any change in scenery. In attendance were Tom W, Clint C, Chris B and myself.

Our host Tom has this incredible roof deck. 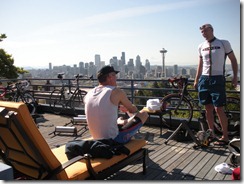 I mean you can see EVERYTHING from up here. Plus it's facing south so bonus if you like to expose yourself to the sun which I do. Hey, if you're going to ride rollers for an ungodly amount of time, it might as well be up here.

As we got ready it was time for the obligatory 'pre' shot. 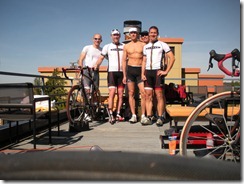 NOTE – we're all still smiling. That's because we have not been sitting in the same spot on our saddles for three hours yet. Also note that I have already turned into bare chest guy. Sadly this is my predisposition when the temperature climbs above 60 degrees.

The vibration from four sets of rollers is pretty damn loud! 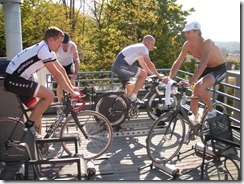 Especially when you are riding on a wood deck and not some sort of more solid surface like the concrete infield at the track. Or sitting on your couch watching television; that's much more quiet.

Chris did not have any rollers but he's so game he showed up on his trainer. 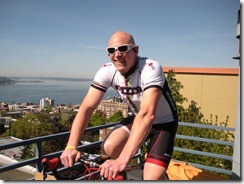 If you look closely you will see a yellow LiveStrong bracelet on his right wrist. For this reason (and this reason only) Chris won the 'how well can you adhere to the theme of the event' competition. It was kind of a gimme and I can't believe none of us thought of this…

Last year I got a little burned by the sun so not wanting to mess with success I started this year with no shirt on instead of waiting 10 minutes to remove it like in 2009. 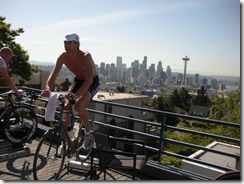 It's just how I roll. Someone had brought along a massive tube of some sort of skin cream… not sure what that was all about.

So we got started. Last year this took me 2:48:29. Roughly. And I was riding a 53x12. This year Tom had the brilliant insight to recommend we all use a 53x11 in order to expedite things. It seemed like genius to me except that it turns out I literally do not own a road cassette with an 11-tooth cog! :( In the end I had to kludge something together. I cannibalized the 11 off of our mountain tandem and then had to custom fit spacers on the cassette body as this cog was not the same width as the 12. My cassette looked ridiculous in the end with this big gap between the 11 and the 13 (there was no 12) but hey, I figured I would only need ONE gear and luckily I was right.

Doing this event is all about not thinking about doing this event. It's time to concentrate on things like blending your cycling tan lines as demonstrated by Tom. 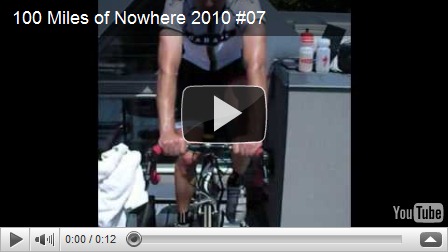 Tom getting it done.

Nice job Tom! Maybe some day I'll get him to try a sleeveless jersey or even [gasp] roll up his shorts.

If you are a stud then in lieu of distracting yourself you could of course choose to focus on the task at hand. Like Guy is here for example. 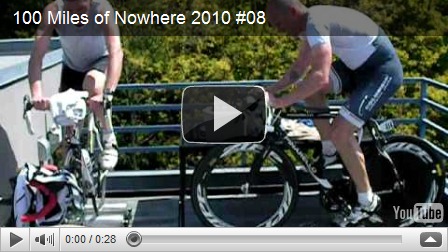 You will notice how the sheer intensity of Guy's effort caused Clint to climb off his bike. During any training ride (and it does not have to be on the road obviously) it's paramount to beat down your teammates psychologically; beat them down hard. Oh the intimidation! Actual race results are incidental and insignificant – it's all about the psych-out while training. If you look closely you will also notice that Guy's wheels are spinning in reverse. Turns out he had the slowest time… Coincidence? Perhaps. But no matter. Mental attrition good, actual results no big deal.

Without a doubt Guy wins the 'my wheels are cooler than yours' competition. Hands down. He had more carbon going on than all of the rest of us combined.

A contrast in styles was Chris. 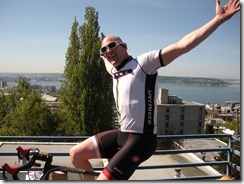 Opting to employ alternative technology (trainer, no rollers) and to ride to the tune of a different drummer (Oakley Thump pumping out god only knows what), Chris was so distracted he threw up a victory salute that was WAY premature. He tried to brush it off, "I was just practicing…" but inexperience stands out like a pair of (non-bib) Performance shorts at a bike race. I mean c'mon Chris, show a little respect for the effort and at least fake it.

He did take his jersey off at one point. Proof that he was getting warm at least. Of course he did say something about finally getting his trainer resistance 'dialed in' so it was probably just the sunny weather. 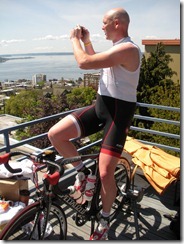 While Tom and I had an 11-tooth cog and Guy had his high tech wheels and Chris had his dubious resistance, Clint chose to run what he brung and soldered through the entire ride on a 50x12. 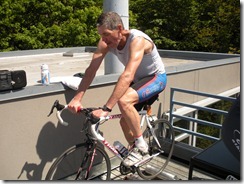 And truth be told, that might have been the most amazing feat of all. A true hard man of the NW, Clint never has been one to shy away from a challenge or balk at adversity. Clint should be featured in an Old Spice commercial.

And me? I tried to make light of this event but truth be told I was kinda tightly wound myself. 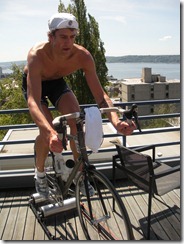 Note strained expression, hands tightly gripping bars, eyes riveted on front wheel. Seems I had a tad bit of trouble staying on my rollers last year so this year I positioned myself well away from anyone else. No bigger faux pas than bailing off your bike and falling into your friend. Especially when you aren't even moving! And since cyclists historically like to set the bar REALLY low to guarantee they can exceed their expectations (Martin is no different in this regard for sure), having the uber macho 11-tooth cog on meant anything slower than last year's time would be utter failure. Truth be told, athletes – even no-hoper, amateur ones like me – are experts in making a mountain out of a molehill.

Did I mention Clint isn't racing these days? See for yourself. 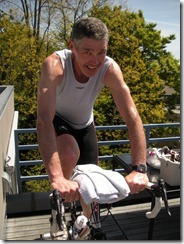 As time went by Chris decided to give rollers a shot. To his credit he was able to ride them! Speaking of rollers, it turns out that selection is key. Tom, Clint and I used the industry standard, Kreitler 4.5 rollers with aluminum drums. Guy was using a bad-ass looking set of Weyless rollers with steel drums. Unfortunately 'bad-ass' does not always equate to 'super fast'… Occasionally we would query each other to see how far everyone had ridden. Guy is a track racing MONSTER and so it came as a big surprise to see him fall of the pace a bit and slowly get further and further behind. Towards the end after I had finished he switched to my rollers and had an epiphany. Turns out his drums – although the same size as mine – are harder to spin so he was fighting just that teeny, tiny, miniscule extra bit of resistance all the time. "Dude, this like 7 mph easier!" I think were his exact words.

Let's recap then shall we? Here is Guy on his Weyless rollers. 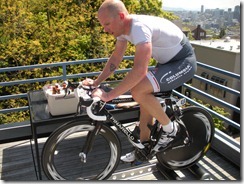 And here is Chris politely waiting for everyone else (read: Guy) to finish before he attacks the pizza and beer. 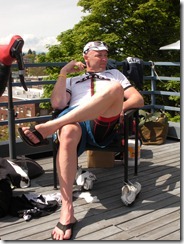 And here is Clint (and Lila) doing the same. 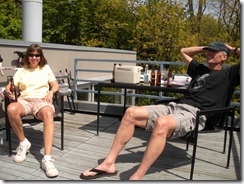 Hahahahaha… Okay, I need to come clean and let you  know that all these pictures are not exactly in the proper sequence and Guy actually did really well. But what good is your own blog if you can't take creative license? None. My point exactly.

Here is proof positive that Guy was killing it all morning long. 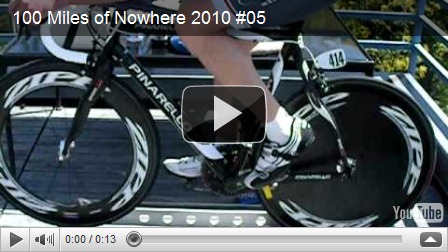 And here is proof that he kept right on killing it after switching rollers. 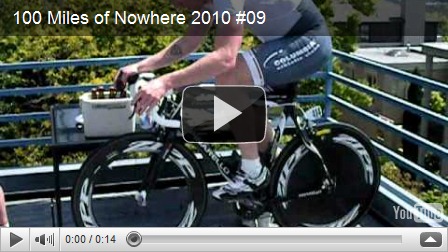 In the end it went pretty well for everyone. Tom had a nagging mechanical (his chain kept skipping intermittently in the 11) that we could not fix but dutifully completed the ride. Clint talked himself out of finishing and then talked himself back in – way to go. Guy conquered his equipment adversity and Chris did not succumb to our endless barrage of 'you are riding a trainer instead of rollers and don't even have to balance yourself' taunts. I did not fall of my rollers! Yeah for me. Lila called in our pizza order before we were done, brought up drinks on ice (I know!) and even tried to keep us company before the deafening THRUMMMM… of the rollers drove her away to walk the dogs. Once done we all relaxed and enjoyed the view for a change. And the food.

We even got a mention on Fatty's blog. Nice.

Thanks to Tom and Lila for hosting; to Guy, Clint, Chris and Tom for the excellent company; to Fatty for thinking of this nutty event in the first place, to LiveStrong for doing good things with the money we raised and to Twin Six for the generous schwag. And to pizza and beer as recovery food! I'll be back. I think.

Here all all the pictures and video.