Sometimes (read: usually) it's not about me.

This weekend I had the chance to pace my friend Dave VanMiller at the Cascade Crest 100 Mile Endurance Run and it was awesome! More to the point, Dave was awesome! 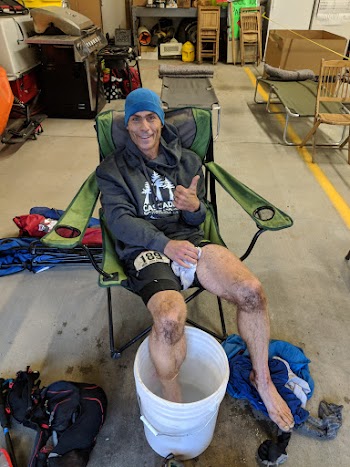 Pacing and volunteering have got to be the best ways to give back to this sport of trail running. Pacing and being paced has also been some of the best experiences I have had running.

For the past several years I have been running with my sister Lucca at the Seattle Marathon. Some years it's just been for fun and some years she was really going for it and I believe her Marathon PR was set on this course one of the years we ran together. It's become somewhat of an annual tradition. We have also run all of the Sun Mountain 50k together.

I had the good fortune to happen onto a pacer myself when I ran Cascade Crest and it was a fantastic experience. So when Dave said he was looking for a pacer and my weekend was free I jumped at the opportunity.

Cascade Crest lets you pick up your pacer at about the halfway point. Dave's wife Gretchen was going to run with him from mile 54-69 and I was going to take him from 69 to the finish. Since I wasn't going to start running until about 11:00 PM and since there isn't much you can do prior to running except for relaxing, I opted to drive to the halfway point (the Hyak aid station) early to meet Gretchen and Dave.

It was a little surreal sitting there in the John Wayne Trail waiting for runners to show up knowing what they had just covered... One thing that always impresses me is how comfy I am running in these relatively mild temperatures but how freaking cold I get just sitting around in them. Glad I planned for this and packed some layers. 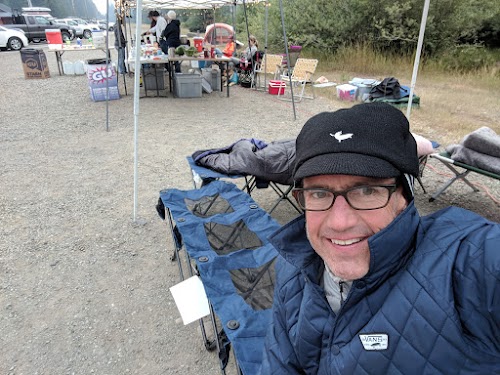 And it was comforting to see that not everyone else was immune to the relative cold. 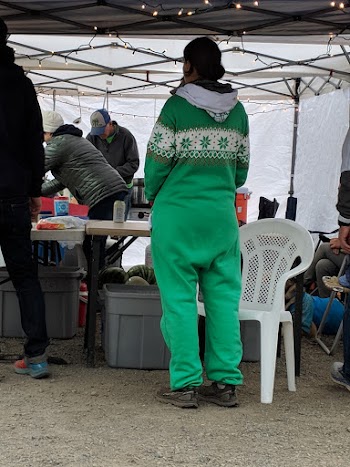 I met tons of friends that were also pacing. It felt like half of my ultra running friends had either gotten into this race or were helping out. So cool!

Gretchen and I connected, discussed logistics, and then there was nothing ot do but chill until Dave showed up.

Watching the leaders come and go was impressive. The first runner had a 50-minute gap on 2nd place! I was told this guy has won this race twice and was going for a course record. When he took off with just his wet t-shirt and two handheld bottles into the cold night and the higher elevation sections of this course I had my doubts... turns out he did win but didn't beat the record.

Dave arrived a little ahead of schedule and looked like he was having a super day! We gave him his pitstop and I managed to snap a quick picture. 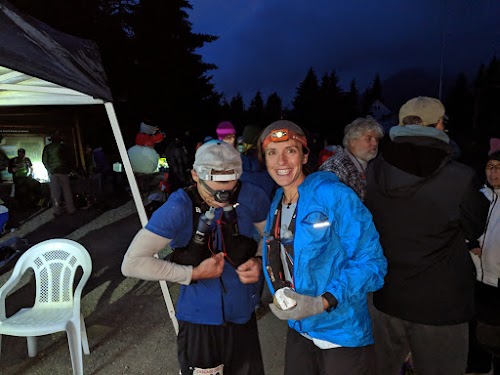 After Dave and Gretchen left, I just cleaned up Dave's drop bag, put everything in Gretchen's car, locked it up and drove myself to the next transition.

And had absolutely. Nothing. To do.

This is the tough part for pacers (or a support crew). You show up early to ensure you don't miss your runner and then you wait.

It was too cold to hang out in just my running clothes so I put layers on over the top, got all my shit ready, reclined my car seat and tried to relax/nap.

Except you can't really nap or you'll miss your runner. I was parked in a turn on a dirt road and the runners would come by me pretty quick. I could only see each one for perhaps 10 seconds and then they were past my car and heading up the road to the aid station. I was really hoping I didn't screw it up.

Luckily I saw Dave and Gretchen approaching. Thank goodness most people have a unique running style which I can recognize immediately. As they ran past I got out and proceeded to grab my gear. Funny how you think you have everything laid out and ready and then it takes WAY longer to actually shed your outer layers, put on your vest, your headlamp, grab your trekking poles, lock the car, reassure yourself that you really locked the car, run through the mental checklist, and jog up to the aid station.

But it worked. I found my runner, found Gretchen, gave her the car keys, told her where it was, and then Dave and I disappeared into the night. And onto the most technical trail of this race - the "trail from hell".

Dave had told me before the start that his goal was 22-24 hours. Gretchen had told me he was having a great day but didn't mention any specifics. I figured if we just didn't slow down much it would be a super finish. The next aid station - Mineral Creek at mile 75 - was not far away in terms of distance but because the trail is so tricky and because it's always up or down, it takes most people about 1.5 hours to get there. Dave is a pretty good trail runner and didn't slow down at all here. I ran in front so I would occasionally turn around and shine my headlamp on the more technical sections to help Dave descend without tripping. There is one creek crossing just before you get to the aid station and you had to rock hop across. I made it over dry but Dave dipped the toe of one shoe in the water. He didn't seem worried so I wasn't either.

We arrived at the aid station and Dave was Mr. Efficient so we were moving again in no time.

From Mineral Creek (mile 75) to No Name Ridge (mile 82) is one big dirt road climb. The one time I ran this race I walked most of it. Not Dave. He kept breaking into a jog. Even when we were walking Dave was moving. On this road we slowly caught another runner, I think he was a great carrot.

Up on the ridge it was colder for sure. Dave was in and out of the aid station again but I grabbed some soup to warm up and had to catch up.

This section of the race takes you along the "Cardiac Needles" so named because the elevation profile looks like an EKG. Our carrot was really strong and it was a challenge to stay in touch. I checked in a couple of times to see if the pace was okay and each time Dave said it was. Dave was really impressing me up here. This is not fast terrain, especially after 80+miles, but Dave was moving really well.

The cherry on the top of the Needles is the Thorp Mt fire lookout. To get here you need to do an out-and-back from the aid station at mile 86 and climb to the high point of this race. Dave (as do most people) opted to skip the aid station on the way up. To prove you ran this section there was a book attached to the lookout and you had to grab the page that corresponded to your bib number. Dave was all business and so we arrived at the aid station again in a hurry. Dave grabbed some food, I filled his bottles, and we were gone.

Suddenly Dave said, "I forgot my poles!" Damn, I had failed one of my pacer duties and let Dave leave equipment behind. I was just about to tell Dave I could run back and get them when he said, "Forget about it. I have a friend at the aid station and can pick them up from him later." Turns out this was a prescient decision.

Dave was still pushing hard. I was SO impressed with his ability to move. Our carrot was still around too, I was starting to worry about Dave blowing up but this guy has loads of experience so I just tried to help and encourage him along.

Dave is the most appreciative and humble runner I know. Every time I told him, "Good job!" or, "You're doing great!" he would say thanks. He even apologized for the occasional grunts he was uttering from the effort. I was like, "Grunt away Dave, you are killing this!" A few minutes after leaving the Thorp aid station Dave slowed just a bit and grunted. I stopped, turned around and he had thrown up. Now this is not a super rare occurrence in ultra running, especially when you are pushing hard (which Dave was!), but people take varying amounts of time to recover from it. Dave took about 10 seconds. I've never puked while running but I imagine it can actually feel good depending on the circumstances... We didn't stop to discuss this topic as Dave was already moving again. What focus!

The climb to the Thorp fire lookout is not the last "needle" and on the next climb, Dave suddenly asked for my trekking poles. No problem! Glad to help. My poles are longer than Daves but the difference is not extreme. At the top of the climb, he just handed them back. Nice! This is how we rolled over the next couple of hills.

Dave was still doing okay when we got to French Cabin (mile 89) although he had slowed a bit on the climbs. Our carrot kept pulling away on the ascents and we would catch him back up on the descents. I filled another bottle here for Dave and we were off.

Over the course of the last big climb and the next few miles, our carrot slowly pulled ahead. Suddenly he was going faster on the climbs and descents. Dave didn't get rattled and we just continued on as best we could.

I thought we were in no man's land so when a headlamp started to approach us from behind I tried to stay calm. When it came time for them to pass, they said hi, it was our carrot! He had taken a break to fertilize the trees and was just catching up. Dave took it all in stride but we couldn't hang with him as he ran past and slowly, very slowly, his light disappeared up the trail again. On the upside, no one had caught us. :)

As we approached the Silver Creek aid station (mile 96) Dave had the presence of mind to ask me if I would fill a bottle for him as he ran straight through. Yes! It only took me about 60 seconds and then I was chasing Dave down.

I'm no maths wiz and my watch was not displaying the time of day so it was hard for me to give Dave any sort of ETA or time goal to shoot for. Luckily Dave was content to, and able to,  just go as hard as he could. As we hit the pavement, we closed just a little on our carrot but we couldn't catch him. When we finally started running along the train tracks toward the fire station, Dave looked at the finish line with the giant clock and said, "It's not 22 hours yet!"

Oh man, if you can sprint after running 99+ miles then that is what Dave did. Wow! 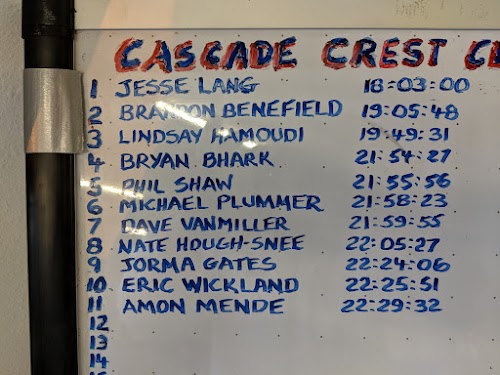 This guy is amazing! I only hope I can channel this much focus during my next 100-mile race.