running through The Enchantments

I have been trying to do this run for years. Twice I got turned away because of forest fires and once because of an injury. I guess the fourth time is the charm. I'm SO glad to have made it out here. 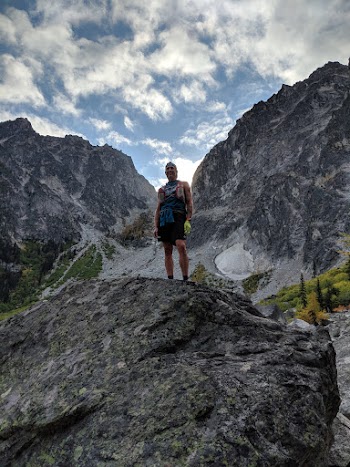 The Enchantments are in the Alpine Lakes Wilderness just outside of Leavenworth, WA. It's a series of (enchanting) alpine lakes in an area that was carved out by glaciers which left behind tons of exposed granite. The rock is (I think) alternately bleached from the sun and black from lichen which makes for spectacular scenery.

At times you are running across giant stone slabs that have been worn smooth, almost like the sandstone Slickrock Trail near Moab, UT. In other spots, the rock is jagged and sharp. All the lakes are an incredible blue and the water is crystal clear. 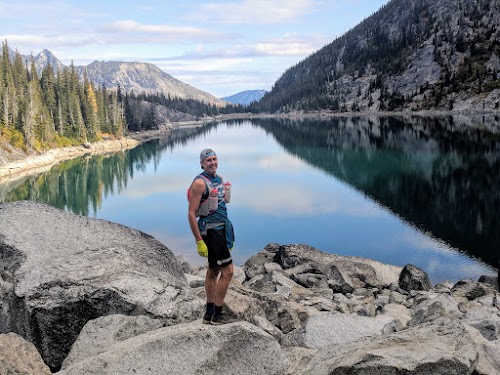 The trail is about 20 miles long. Some over-achievers will also run the eight-mile connector (four miles of pavement and four miles of a steep, dirt road) but we opted for the aptly named Loop Connector Shuttle. I approve of this option.

Most people will hike or run this trail in late September or early October as that is when the Larches turn. If you time it right, the hills are on fire. 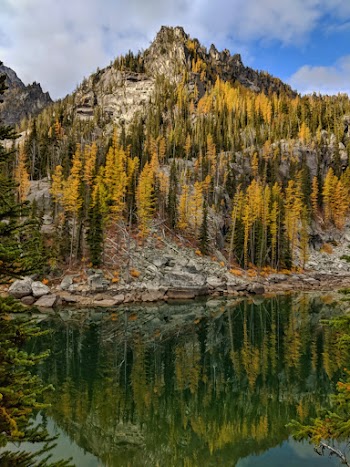 If you plan on camping up here you need a permit which is really hard to get because The Enchantments are so popular this time of year. Through runners needn't worry about a permit.

I did this run with a Seattle Running Club (my running club) group. We took a lot of pictures! So many in fact that I can't possibly highlight them all in this blog post. Instead, here is my entire photo album.

Did I mention that we had amazing weather? The stars sure did align for this run.

The only bummer was spraining my left ankle pretty badly with about four miles to go. I heard what sounded like a ligament snap and for a few minutes I was on the ground feeling pretty awful. Experience has taught me that movement is best so as soon as I could I started to walk and eventually I was jogging. I managed to run the rest of the trail but had to walk tight corners and rocky sections. Hopefully this heals soon, it's the third time I have sprained this ankle.

Oh yeah, and the pack I took was too small. It was cold at the start and up top so whenever I wasn't chilly I had to tie some items around my waist. Boo Hoo.