I have been knocking on the door of six hours at the Rainshadow Running Orcas Island 50k for some time and finally managed to get there. I was not the fittest I have ever been but we had a super day and my pacing definitely is much better than it used to be so today really was a case of (my more) experience(d) (self) triumphing over (my more) youth(ful) (self). 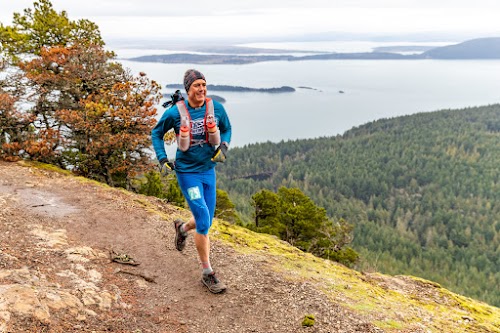 Thanks to James Varner for doing what he does so well! 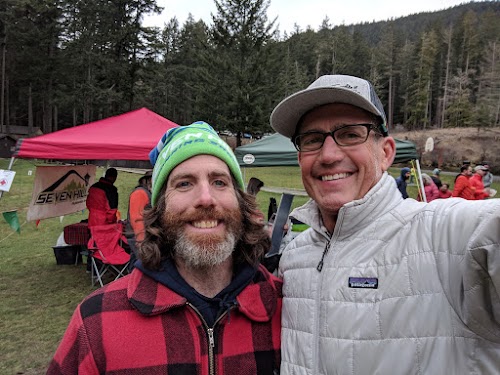 Here is my history at this race.

2013 - 6:04
This year I (re)sprained my ankle pretty badly early on which cost me some time as I slowly recovered and accelerated.

2015 - 6:02
No physical ailments this year, but it was really wet and muddy which slowed everyone down.

My previous efforts indicate I had a sub-six run in me all the time so it's super satisfying to finally pull it off. Showing up healthy and finally having an incident-free day sure helps. :)

Pacing has been my mission ever since the beginning of last year. I know, I know, why not all the time? Well as anyone that competes knows, it can be hard to actually execute a plan. I always thought I was okay at pacing myself but the truth was I needed to start even slower. Last year I finally began to walk the talk. and it has paid off big time.

What changed? Two things.
The start was very chill. I got there early, picked up my number, and relaxed in my car. With about 15 minutes to go I walked over, did a light warmup, listened to James' pre-race announcement, and we were off.
Speaking of pacing, it always surprises me how many people appear to be gunning for a 10k PR in an ultra. I started near the front just to try and avoid getting mired in the herd but at least 80 people passed me in the first two miles. On the other hand, only one person passed me between mile two and the finish.
Once I had been running for a few minutes I switched my watch to the screen with heart rate and power. Whoops... looks like I had forgotten to put on my heart rate strap. Oh well, that data is nice to have but I really only use my Stryd for pacing so tried to not let it bother me.
Based on an excellent run at last year's Chuckanut 50k, I guessed I could average 285 watts today. Proving that I'm not perfect at pacing, I made two mistakes. Last March I was fitter than I am now (and last year I already had a race under my belt come February) and this race starts with a big climb and I let my power sneak up a little too high. On the paved climb, I kept seeing 300-320 watts and on this day that was just a little too much. It always feels easy at the beginning of an ultra, right? In the end, I averaged 260 watts and faded a bit in the last six miles. My climbing felt pretty good, but my flat running (lack of fitness) and descending (lack of strength) was not the best it has been. Kind of a bummer too because I love to run downhill!
Looking at the aid stations in advance I figured I would only need to stop twice. I usually run with two 24 oz bottles which is a lot of fluid on a cool day so figured I only needed to stop at mile 13 and 20. Turns out that was perfect.
Ever since I switched to liquid food as my primary fuel aid stations have gotten much easier. I just pull up with a bag of powder in my hand, dump it in an empty bottle, and get it filled up with water. Done. Both times I showed up at aid stations today they were not crowded so I was even able to ask a volunteer to do this for me and was able to calmly eat a gel while getting serviced. Nice!
Another thing that has let me run worry free and focus on my pacing has been my shoes. I can't overstate how important comfy shoes are. They should not rub or bind, they should not impact your toes on descents, and you should feel like you have control. My Topo shoes do all that.
I dressed perfectly today. I had on a little more than some other runners but these days I don't run very hot and it worked out. I was warm at the top of the first climb but it cooled off again on the Power Line climb so no problem.
Here are some highlights. 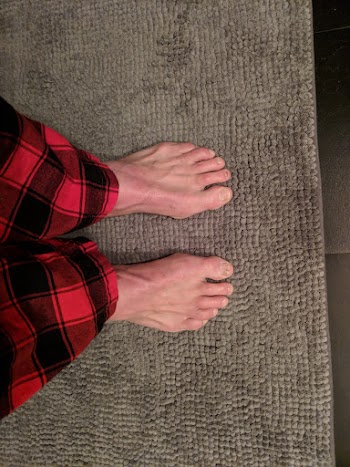