In spite of doing pretty much everything you are not supposed to just prior to a long run I finished this event in reasonable shape. Once again I am impressed how the body adapts to this kind of stress and these days I am looking at a marathon like I would a 75 mile bike ride back in the summer. Hard but by no means impossible and okay to do even if you are not fresh.

The Loop The lake Marathon was put on by The Balanced Athlete and it's a great, low-key event that had about 60+ people running the same loop I have ridden on my bicycle countless times. We started in Renton at the store and went clockwise around the south half of Lake WA. Good people and good times.

What did I do that you are not supposed to do? Here you go. 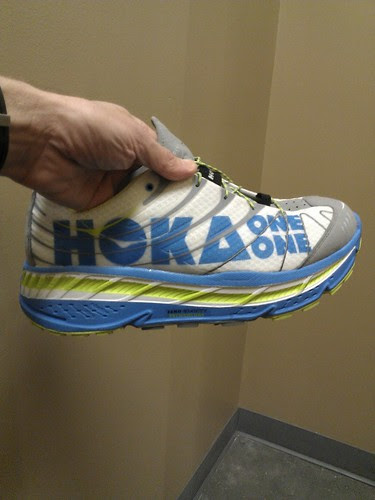 I drove down to The Landing in Renton and parked in the garage. Man, can I just say how awesome it is to have covered parking right next to the event? Fantastic. In an effort to shed some last minute grams I got out the fingernail clippers and gave myself a long overdue manicure just outside the garage. It's all about the mental edge people.

Inside the store folks were already milling about swapping the usual run stories and keeping warm.

ASIDE - That was another huge bonus. Being able to hang out in a heated space. Supah.

With about 10 minutes to go we lined up outside in the middle of the street and without much fuss or pomp we were off.

My goal going in - assuming I had a good day - was to go under 3:15. That's just under a 7:30 pace so when I saw myself hovering in the 7:15-7:30 range for the first few miles and having it feel fine I was pretty stoked. All the way up Rainer, around Seward Park and up Lake WA Blvd I was feeling pretty good. For the first few miles there were about four people right behind me but by the time we turned off of Rainier Ave. it was down to just one guy, Steve. We finally started talking as we rounded Seward and that's when I asked him what kind of pace a 3:15 would require as I had heard him talking in the store about wanting to post this time. Turns out Steve is a high school cross country coach and has run several marathons. I figured if I could hang with him my goal was in the bag.

Although this 'race' was free and super low key there were tons of volunteers and it was supported with FIVE aid stations. Can you believe it? How deluxe can you get. This meant I only had to start with one bottle and a couple of gels and at each aid station I topped off my bottle and grabbed another gel to replace the one I had eaten and I was golden all the way to finish. In terms of food and drink anyway. :)

Aid station #3 was right at the half way point and when we hit this I suddenly realized that I had gone out too fast. Rats. I faked it going up the stairs and across I-90 and here since the wind was blowing a bit Steve slowed down some and I, being the veteran cyclist that I am, tucked in behind and got as much of a draft as I could. It did not help enough. As we climbed up the east side of the bridge and onto the Mercer Island lid I could feel myself fading badly.

Aid station #4 was right after you loop under the freeway and before you head across the swamp and I was incredibly grateful for the opportunity to stop. I had already slowed down a little and Steve had accommodated my pace for some reason and I was not complaining but I was also sure that soon I'd be solo.

Just as we got off Coal Creek Parkway and onto the trail I had to walk. My glutes were tying up and I was just plain tired! No bonking or anything, I was just worn out. I told Steve I had to take a breather and you know what? He waited for me! How nice of him. I had to walk about four more times before the finish and each time Steve said no problem and kept me company. Man was it nice to not be alone at the end.

If you look at my GPS data below you can see me fading steadily once I got half way through this. Not ideal. The second half of this run has some rolling hills and although none of them are severe they sure slowed me down. Here I was trying to keep it under 7:30 and at times I was slower than 8:30.

You know how toward the end of a ride/run you can smell the barn and suddenly the effort disappears and you are certain you can finish? That didn't really happen to me today until I had less than one mile to go.

In the end I was just tired and tight, no major damage. Huge thanks to all the volunteers for being out there for many hours and to Steve for running with me all day even though he obviously could have gone faster. Thanks also to Eric Sach for putting on this event. I needed a mellow marathon without all the expectations or performance.

Oh yeah, what about my shoes? They worked great! Super comfy and although my legs were somewhat hammered at the end I'm sure they would have been worse off had I been wearing something else. Yeah, technically this model of Hoka is a trail running shoe but what the hell. It's not like I have ever worn out the sole of any shoes I have owned.

Technorati Tags: The Balanced Athlete,Loop The Lake Marathon
at 2:54 PM