RAMROD is perhaps the most scenic, iconic, and challenging recreational ride in the Pacific Northwest. Over the years I have ridden it loads of times and although some years have been harder than others, it's always been an awesome experience. This year I rode it with my good friends John Phillips and John Ospina and a friend of John Ospina's Mark. These guys drug me around the mountain without complaining and waited for me at rest stops. Good friends are great to have. 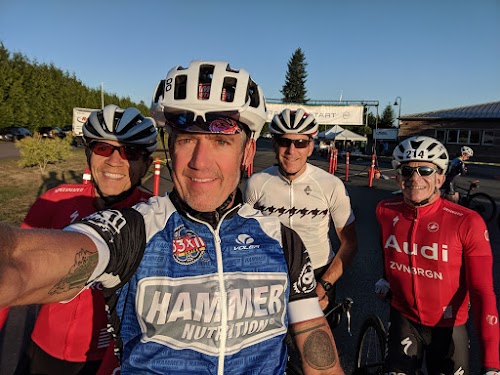 Prior to the ride this year I was extremely flattered to get approached by the current President of the Redmond Cycling Club (Joseph Matthews) who said he wanted to feature me in this year's edition of RAMROD Stories. We did all the filming and interviews in one afternoon right by my house and through the magic of editing Joseph came up with this. The whole experience was super fun.


The RAMROD Story experience also made me smile as the days of 7:15 are LONG gone but it also proved to me that you can enjoy events across a wide spectrum of fitness levels. Here's to getting outside for yourself no matter what your speed.

These days my friends and I have a pretty reliable RAMROD routine. We start around 6:00 AM, ride relatively fast between aid stations but we also stop at every aid station and enjoy ourselves and the services the volunteers bring to the table. Speaking of volunteers, one of my friends (Tony Callen) was at the Box Canyon rest stop this year serving up my favorite treat in this ride, chocolate croissants. 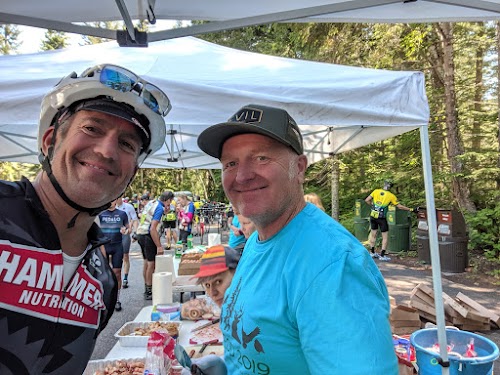 The weather was perfect! This time in July, the weather is rarely bad, we only needed arm warmers and thin gloves at the start (which were shed in pretty short order) and it never got too hot.

Every section of this course is scenic in its own way. The first 70 miles are very green and you ride past some very pretty lakes. The middle of the ride obviously features Mt Rainier and the last 40 miles are also scenic in their own way.

You know that feeling when you get a new bike? I had it. This was going to be my first long road ride on my new Thesis OB1. It's my first 1x (only a single chainring) road bike and I was excited to see how it performed. The result? Awesome. 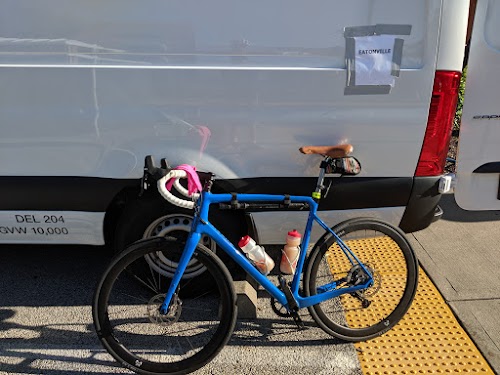 There were a few times when I was wishing I had that in-between gear (the cassette is an 11-speed, 10-42) but it was much less than I anticipated. And the bike climbs and descends like crazy.

We started out in a pretty small group and only collected a handful of other riders. That was great and we were moving along smoothly. Then, we started to collect more and more people. Some of whom had different agendas and varying amounts of pack riding experience. I should have known this was going to happen. :(

Soon we are surging like mad when a particular person hit the front. Some people seem to take a very long time to learn that proper paceline riding is achieved by maintaining the speed of the GROUP rather than having every person pull at their own favorite speed... Needless to say, I burnt a few matches closing gaps when these people would sprint off the front.

One such surge was just outside of the second aid station and it was a massive effort for me. Too much in fact, I was just about to let this guy go when I saw the aid station and he slowed down. At that point I was still at least 50' behind him with perhaps 40 riders on my wheel. Argh.

As we rolled out of this aid station I realized right away that I was cooked. Totally. And I was not even halfway into the ride! :( Then we rode up this tiny rise and I was off the back like a sack of bricks. After a few seconds I realized this was not one of those times that anyone was going to wait for me so I just tried to get stuck in at whatever pace I was going to be able to maintain. I also decided to cram some food in my face and chug a bottle.

Wow, I was moving s l o w l y. Nothing to be done except enjoy the scenery. So I did, all the way up to Paradise, and down to Box Canyon. 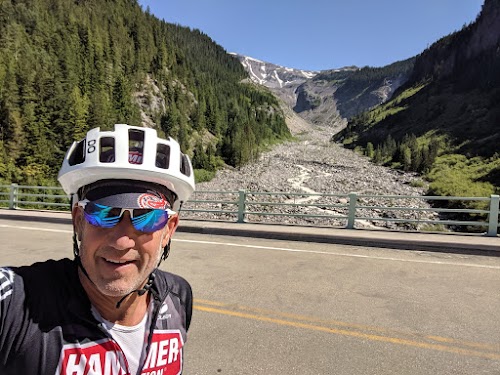 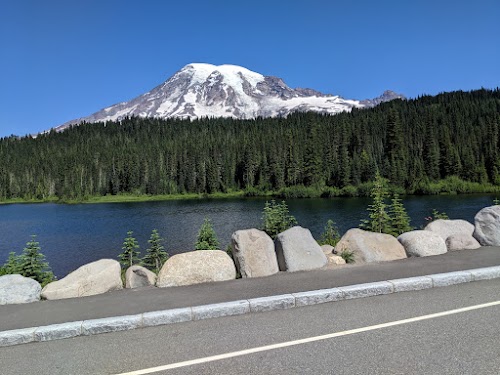 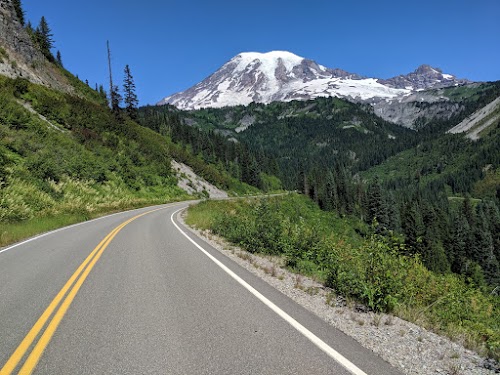 Which is where everyone was waiting for me and where I saw Tony and had my chocolate croissants.

I was feeling better! But I also knew that I was close to blowing up again so had to walk the line between going hard and making it to the finish. As we rolled out of the Box Canyon rest stop, Joseph came with us! That's right, he's not just the President of RCC, he loves to ride too. 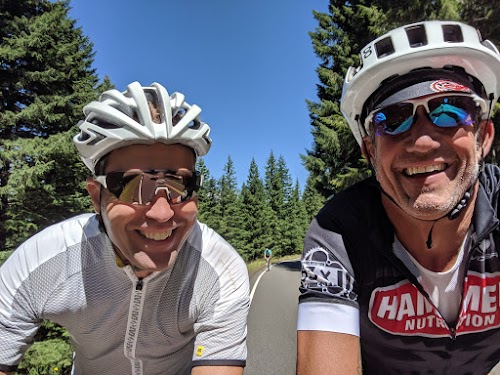 In the ensuing miles, John Ospina and Mark slowly slipped up the road and finally I was just riding with John Phillips. We maintained a relaxed pace, mostly because it was the only pace I could maintain! :) For the first time in ages, people were passing me going up Cayuse Pass. And I gotta say, good for them.

Normally I would have pictures of my massive turkey, cheese, lettuce, and tomato sandwich but for some reason I didn't have the motivation to pull out my phone so I just at my lunch at the "deli stop" and enjoyed every bite. Sometimes there just is no substitute for a sandwich, potato chips, and a Coke.

The last 40 miles of this ride is best in a group, the bigger (to a point) the better. For some reason our timing must have been off as there were no other riders moving when we decided to make our exit. Oh well. I probably pulled about 10% of the time during this section, I was running on fumes and the smallest rise would have me drifting off the wheel in front of me. I hate it when that happens. But here's to good friends! Every time it did happen, they waited for me or slowed down. We finally got to the Mud Mountain turn off and then I knew I would make it to the finish. 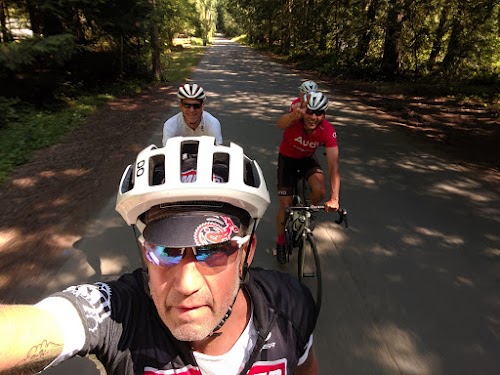 Just before the finish we got one last shot of the mountain. 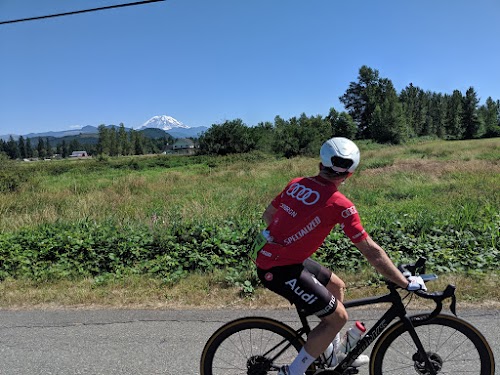 And then we were riding into the school. 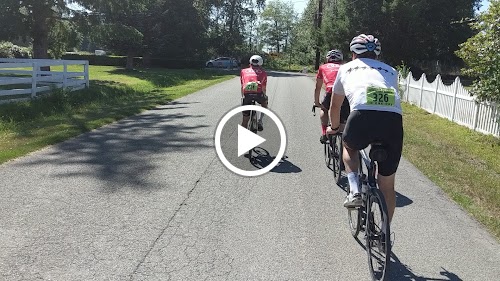 And then we were eating ice cream! 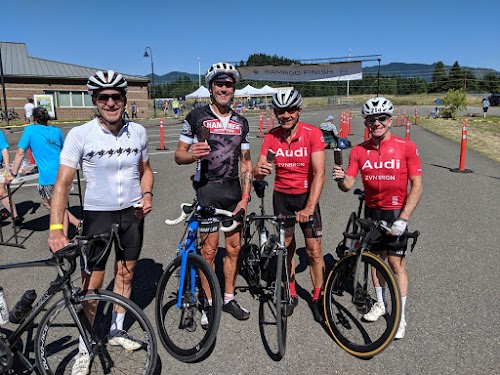 Huge thanks to John, John, and Mark for towing me around all day. And to Redmond Cycling Club for putting on this extraordinary ride year after year. I have so many memories of this event, both great ones and painful ones, but I wouldn't trade them for anything. Here's to doing it all again in 2020!

Here are all of my pictures and videos.