I am so proud of Lucca! 2019 was the eighth time we have run the Seattle Marathon together and this year she got within 59 seconds of her marathon PR. Wow! 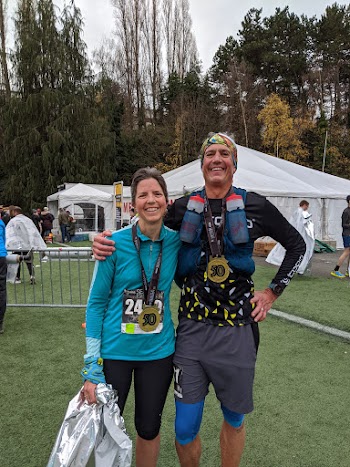 Here's to these types of family traditions.

When Lucca signed up for the Seattle Marathon I jumped at the opportunity to pace her again. Heck, it's pretty much an unspoken contract these days.

As luck would have it, Lucca was in town about two weeks prior to the race so we got in our last "long run" then and we also got out together the two days prior to the race for a shakeout run and some strides. It's so cool to spend time with family doing what you both love.

I recently got a Garmin fenix 6X Pro Saphire and although many of the features are similar to those on my old fenix 3, I had not yet actually used the training feature that lets you enter a distance and time target to see if you are ahead or behind schedule. So, of course, I decide it's a great idea to use this for the first time on race day... #foreshadowing

Lucca likes staying at the Westin the night before the race and I was coming from home. Luckily the very first scheduled trip of the #14 bus was early enough to get me to the start on time. And really, this route is incredibly convenient. I caught the bus at 5:55 AM and got dropped off at 6:20. From there I only had to walk two blocks and meet Lucca at the bag check. Since I was already wearing all my running clothes, we had plenty of time to hit a porta-potty and find a spot in the corral with 15 minutes to spare before the start.

Here is one of the best smiles ever! 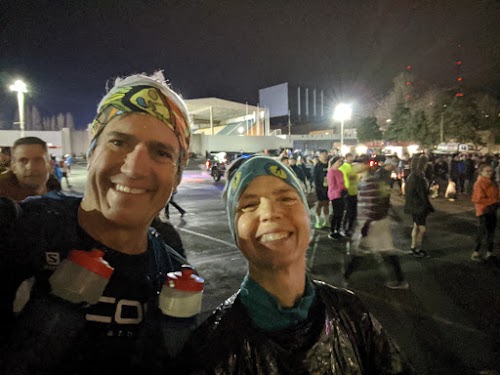 This year was the first time that everyone (meaning walkers, runners, half marathon and full marathon) started at the same time. Not ideal if you ask me but for some reason, the race organizers didn't do that. :) I understand there are constraints like how long they can close I-5 but still, 5th Ave was the busiest I have ever experienced!

Lucca's stated goal was just to break 4:00. Of course, I knew that was going to happen so I set the target on my watch for 3:55. Lucca's PR at this event is 3:45:01 and 10 minutes in a marathon is a pretty huge time margin so I didn't waste time fantasizing about another PR. When the starting gun sounded we shuffled forward for about 30 seconds until we crossed the start line and then tried to settle into a 9:00/mile pace.

As anyone who has run a big road marathon knows, the start is usually kinda messy. Unless you are an elite, you are dodging in and out of runners for at least a handful of miles and it's pretty tough to establish a consistent pace. We were doing a pretty good job of not running into people and I kept glancing at my watch to make sure we were on track. Shortly I noticed that we were falling a little behind but figured it was no big deal since 1) the time target on my watch was faster than Lucca's goal and 2) we could speed up once we get off of 5th Ave.

7:00 AM is the earliest that this race has started. In the past, we headed out at 8:00 and this time of year it's still pretty dark at 7:00. But it was fun! Downtown is already all lit up by this time of year so running down 5th was like running in a light tunnel. And by the time we got on the freeway express lanes night had turned to dawn and the sky was just gray instead of black. Even so, the express lanes are pretty sheltered from the sun and there are no streetlights here so you had to watch yourself so you didn't trip on a road turtle. 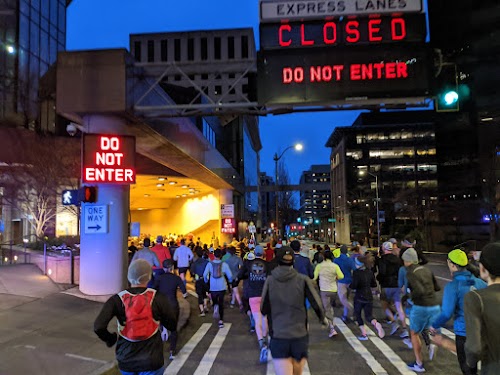 As we headed north on the I-5 express lanes I could see that we were falling even more behind schedule. By this time it was just three minutes so I didn't panic but I was starting to think about how to broach the topic with Lucca should that be needed. If someone is already going as fast as they can on this day, how do you ask them to go faster? And would this put a dent in Lucca's enthusiasm? The last thing I wanted to do as her pacer was to detract from the fun of this run. So I kicked that can down the road a bit and took some pictures. 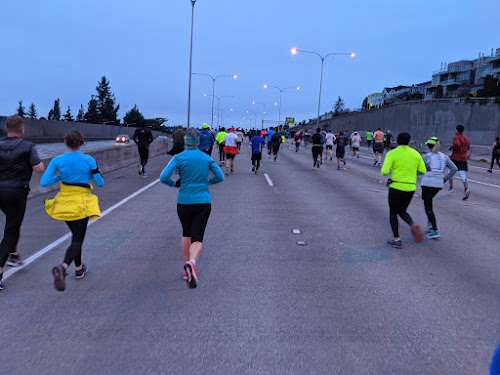 On the I-5 bridge heading to the UW. 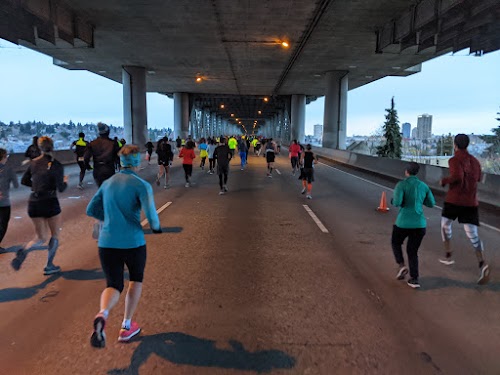 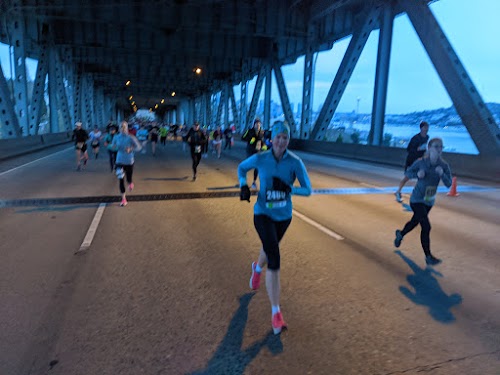 As we exited the freeway Heather de Vrieze was here and cheered us on, it's always super nice to hear a friendly voice.

The next chunk of miles is pancake flat on the Burke Gilman Trail. I glanced down at my watch and now we were over five minutes behind schedule! Oh no... I decided then and there I was not going to push Lucca this early and instead focus on making this a fun and memorable experience so just gave non-specific encouragement and kept making sure we both ate and drank at regular intervals. The only thing worse than running a slower race than you wanted to is bonking or cramping while doing it. A couple of miles later we were SEVEN MINUTES behind schedule. I was having a hard time keeping my mouth shut but what was I going to do? 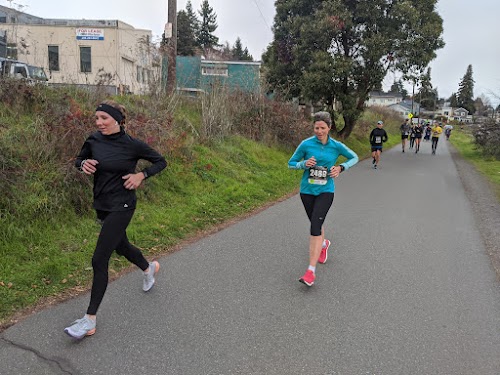 Once on the Burke Gilman I was eagerly anticipating the arrival of the leaders. It's always cool to see someone moving that fast. First, we saw a hand crank-powered chair being escorted by an event bicycle. Strangely, I don't recall seeing a any other racing wheelchairs... But then we saw blue and red flashing lights. The lead runner had a police motorcycle escort which looked pretty badass on the trail. And second place was nowhere in sight. This guy was killing it around mile 15 or 16.

At this time we were around mile 12 and my watch said that we had finally leveled off around seven minutes behind my 3:55 schedule so Lucca was looking at a 4:02 assuming she did not slow down.

After the turnaround, one of us (I forgot who) brought up the topic of time.

I started to click around on my watch and after a few seconds found a different screen that represented the data in a way that was easier for me to understand. Turns out we were seven minutes AHEAD of schedule, not behind.

After being elated for about two seconds I was then abruptly super worried. Had I taken us out much too fast? Was Lucca going to crash and burn around mile 20?

Lucca and I talked it over and she said she was feeling good and was running "easy" so I figured screw 3:55, we're going to go for it! How exciting!

And just like that, it was on. And I started paying much closer attention to how often we ate and drank. :)

From here the course follows the Burke Gilman Trail all the way back past where we got off I-5 to Gas Works Park and we did a little loop through the park. Then we ran out to "Frelard" (the intersection of Fremont and Ballard) where we did another little out-and-back. When I was looking at the route the night before these detours seemed silly but come race day they were a nice change from just cruising down a trail. I suppose the race organizers inserted them to make the half marathon exactly 13.1 miles.

Leaving Fremont you get to "the hill" on this course. And for a road marathon, this hill is no joke. It climbs 130' vertical feet in just 1.4 miles, and the first part is steep. I did my best to get Lucca hyped up for the effort and she was so strong. 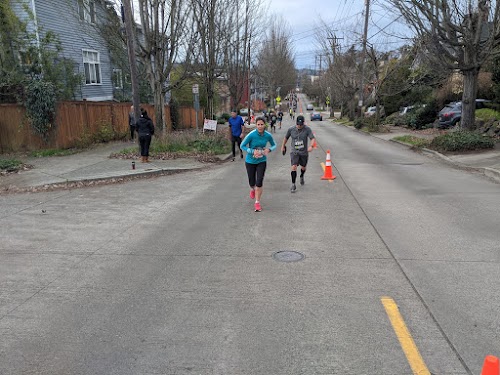 You might notice that Lucca is the only person running!

Here is Lucca going hard less than two miles from the finish. 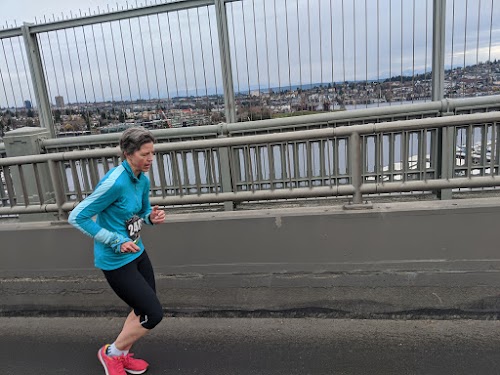 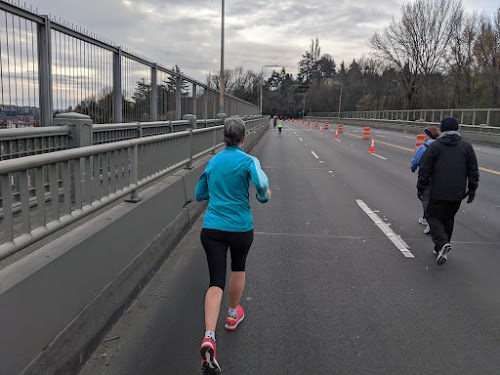 After crossing the Aurora Bridge it's mostly downhill to the finish with just one small, short, gentle climb. Coming into the big climb we were on pace to clock 3:44 or 3:45. At the top of the climb, it was looking like 3:47 or 3:48, we had lost less time than I thought because of that hill! On the descent, I tried my best to speed Lucca up but I know from experience that you can't go faster just because someone is asking you to... To her credit, she did claw back a minute or two and as we approached Memorial Stadium I tried to coax a few more seconds from Lucca. 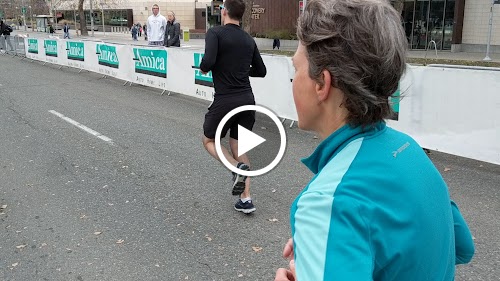 Yes! Turns out Lucca's chip time was exactly 3:46. And 3rd place in her age group, amazing! 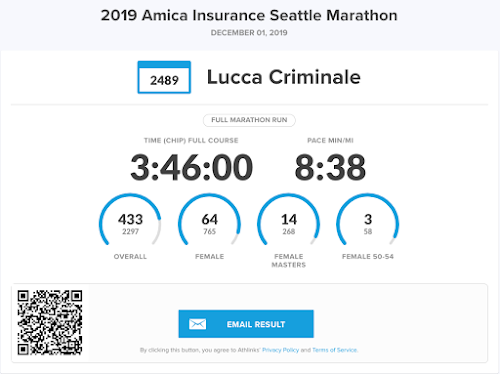 After taking a few finish line photos and reveling in our effort I saw Martin de Vrieze who is a regular at this event and who, of course, was heading to Feierabend for some post-race nourishment so I decided to join him. Plus, the walk helped prevent my legs from locking up. Pacing someone as fast as Lucca isn't easy, just sayin'. 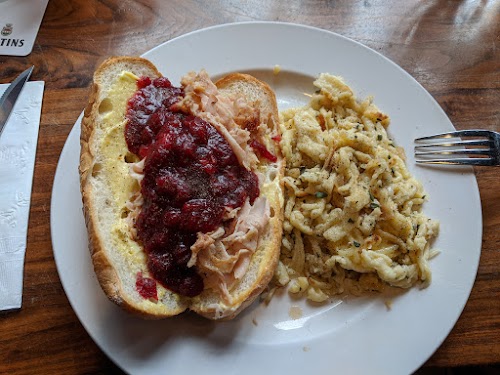 I love this Thanksgiving tradition! Here's to many more. And congratulations Lucca! You excelled.