RAMROD (Ride Around Mount Rainier One Day) on a tandem

Nice! It took a few years but I finally got to check the "ride RAMROD on a tandem" box. Thanks to Jeff Reed for his persistence in making this happen, for being an A #1 stoker and to the Redmond Cycling Club for consistently organizing the premier ride in the Pacific Northwest. I have done this ride scores of times and always want to come back. 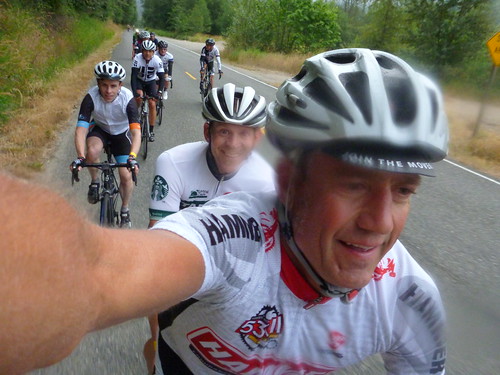 I always seem to connect with old friends at this ride. This year I got to ride with John Ospina. Back in the day, we used to ride and race together and it's been ages since we have seen each other much less ridden together. He's still as fit as ever and because of his presence prevented me from playing the old guy card. Thanks for still being older than me John. :)

Long ago I always tried to finish this ride as fast as possible. Boring! These days the only goal is to have a good time and take lots of pictures. I suppose "good" is relative and if I'm fit "good" equates to a relatively fast pace but that's just natural, right? As it turned out I have been cycling more than usual lately due to an injury that prevented me from running early in the year and we had an incredibly compatible (and fun!) group so we scooted right along. And I gotta say, going fast is NOT boring, but I am over the desire to keep posting a PR here. Way over.

A first for me was never not being on the front. That's just what happens when you are the only tandem in the group, everyone else is drafting. It was okay, it gave me the opportunity to look around more as I was not concentrating on holding a wheel.

Although there have been one or two wet years, I always associate RAMROD with heat, Lots and lots of heat. I recall one year where lots of people didn't even start because the forecast was for 100 degrees and the mere thought of climbing Cayuse Pass in those conditions broke their will. I did develop some pretty big salt stains on my kit that year.

This year it was unexpectedly cool! I was standing at the start in my short sleeved jersey with no arm warmers or vest shivering and watching the mist collect on car windshields wondering if I had made a big mistake... In the end Mother Nature bailed us out. Lucky!

We rolled out and right away the roads were wet. Not rooster tail wet but what do I know, I was in the front. :) We quickly ramped the speed up to 25 ish mph and pretty much kept it there. I am always surprised (although I shouldn't be anymore) how well a tandem rolls and climbs with two experienced people on board. I tried to find a pace that I could maintain and Jeff took pictures. 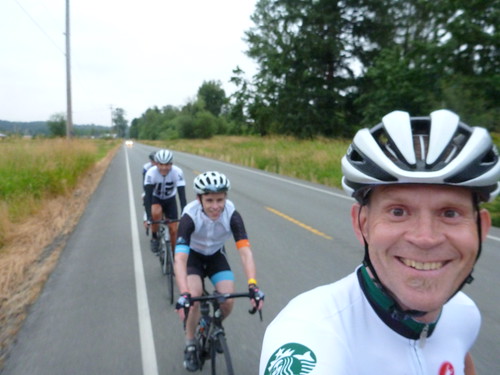 Seriously though, if not for Jeff 90% of these pictures would not exist. Thank you Jeff!

For the first 30 (40?) miles my hands suffered a little. They have pretty poor circulation these days and although my core was fine, my fine motor dexterity was shit. I was very careful not to drop my bottle each time I took a drink. Then we entered the park. And the clouds parted. And the sun came out. Yeeeessss.

Climbing toward Paradise the rest of our group scampered up the road but that was okay. Jeff and I settled into our respective zone 3 efforts (170 bpm for him, 140 bpm for me - vive la difference) and we could still chat and take pictures. 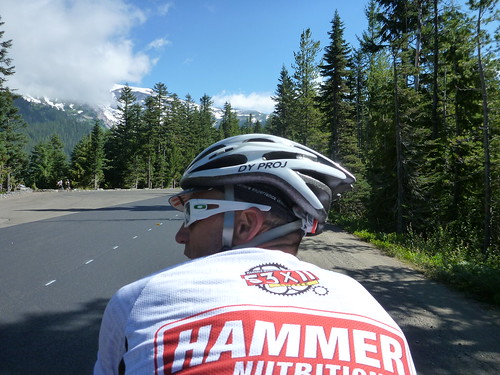 Turns out my hot weather jersey is so thin my camera can film right through the material. Who knew? 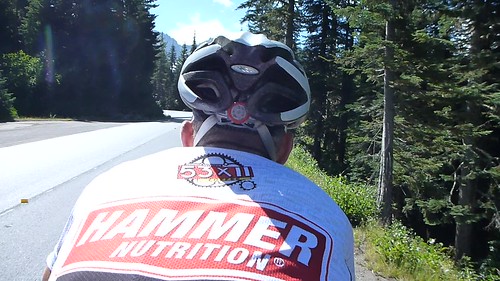 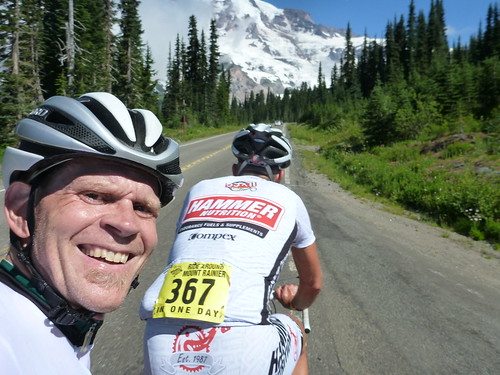 The ride really starts here. It's all about the climbs and descents(!) after all. We regrouped after the first climb and continued to enjoy spectacular views. 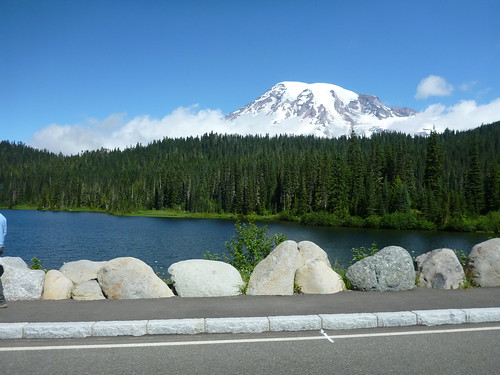 I LOVE THIS RIDE. Mountains, scenery, epic climbs, and descents, fantastic food, what's not to like? And boy does the tandem like to descend. Contrary to popular belief, these roads are not super steep and on a single most people struggle to achieve 40 mph going down. We had no trouble coasting at 42-45. And the bike feels so planted! Cornering was a dream. Near the bottom are four 20 mph corners and we easily took them at 40. Never. Touched. The. Brakes.

At the bottom we topped off our bottles and headed up to Cayuse Pass. Once again the singles in our group rode ahead but it turns out we were only cresting the summits about five minutes behind. Not too shabby. And just when I was feeling pretty macho, Thomas Sumter (on his pimped out Ritte bike) and his friend passed us. Oh well, no shame in that.

ASIDE - speaking of pimped, I saw a lot of deep carbon wheels today. I guess folks didn't want to bring the proverbial knife to a gun fight on this ride. I guess I don't blame them, at least half of going fast is feeling fast.

After more climbing and more descending, you finally leave the park. 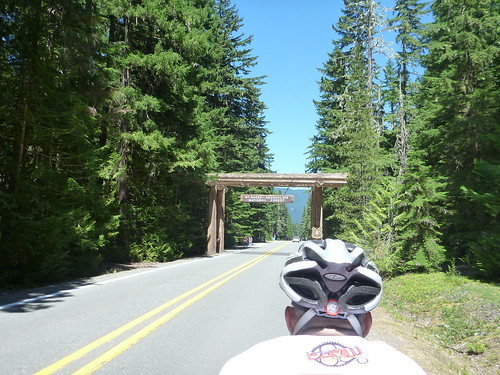 Did I mention this ride has great food? It sure does. At the Box Canyon aid station they always have chocolate croissants! I approve. Usually twice. And the last aid station, dubbed the "deli stop" is over the top. It's like walking into a Subway where volunteers make you a sandwich to order. with your choice of two breads, three meats, two cheeses, mustard, mayonnaise, lettuce, tomatoes, and pickles! The veggies are kept on ice for crying out loud. Don't forget the potato chips, cookies, fruit and freezing cold cans of Coke. OMG. I have been known to approve of all this twice as well but I managed to control myself and just have one sandwich. Awesome. 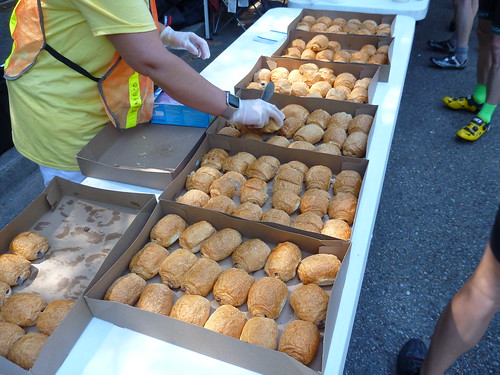 The amount that you enjoy the last 40 miles of RAMROD can vary hugely on so many things. Did you leave something in the tank? Do you have a group to ride with that will help you deal with the inevitable headwind? Today our fate had been cast. We rolled out and got down to business. And in spite of the wind that was sometimes fairly strong, the slope was usually sufficient to let us ride at 25+ mph all the way back to Mud Mountain. Whew. I didn't cramp or blow up or bonk. As we turned left onto Mud Mountain everyone came up and sincerely thanked us for pulling, that was very nice.

At the finish there were just two things left to do. 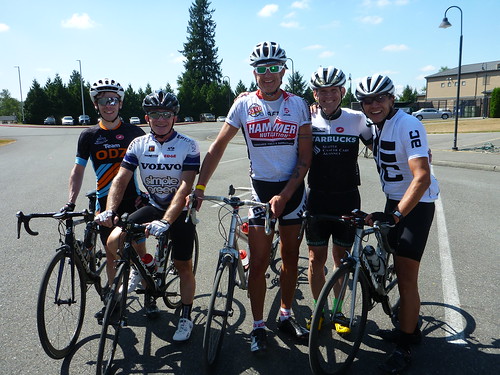 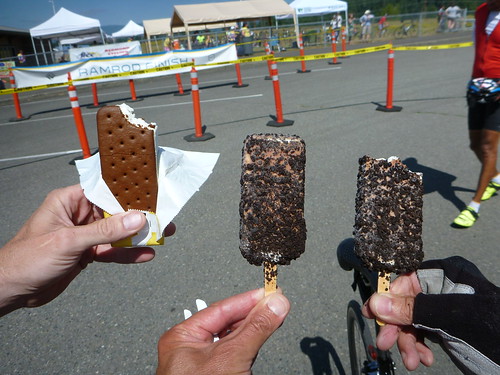 Okay, three things, I also took a shower. I have said it before and I'll say it again, kudos to event organizers for staging the finish at a facility where you can clean up, be it an elementary school gym or a shower truck or a river, the ability to get out of your nasty clothes and clean yourself up is huge.

In retrospect this year had perhaps the best conditions ever for climbing Cayuse Pass. It was relatively cool, there was a tailwind; it was rather enjoyable. Type 1.5 fun perhaps? And our group was fantastic! We were very compatible, everyone had the same agenda (enjoying the ride!) and we were never more than perhaps five minutes apart. Thanks to everyone and again especially to Jeff for keeping the faith that we would both get into this ride the same year and then for providing the horsepower during our ride.