Long ago, before I ever started racing bicycles, some friends and I rode the Cascade Bicycle Club Seattle to Portland bike ride. For many recreational riders in the Pacific Northwest, this is the pinnacle, the ultimate challenge to train for, and at the time I fell squarely into that category. This year I fractured my Fibula in February and since my leg was able to tolerate riding earlier than running, I ramped up my miles as much as I could. One thing led to another and suddenly I did a century, then another and suddenly I'm signed up for STP and RAMROD.

This year I rode with good friends John Phillips and Frank Colich, both HUGE engines and perfect companions as they are steady, safe and over 6' so a pleasure to draft. 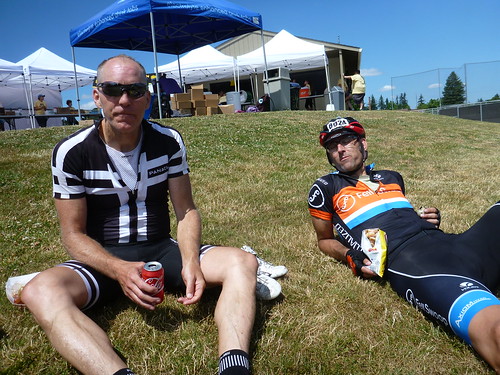 We had a perfect day! At the start it was in the upper 50s and it never got hotter than 80. Plus, we had tailwinds for most of the last 50 miles. I'll take it.

I have not raced bicycles in four years. Since I quit I've slowly been selling my "race" bikes (TT bike, track bike, road race bike, cyclocross bike, etc.) and replacing them with "fun" bikes. Currently, my only geared road bike is this Niner RLT 9. So that's what I have been riding all year. And it's what I rode on during this STP. 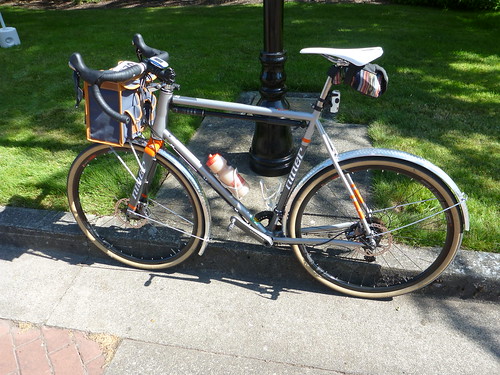 The bike solicited numerous comments during the ride, here are a couple.

Guy on a carbon everything bike riding with his similarly equipped friends, "Nice bike! Although I wouldn't want to ride it for 200 miles..."

The extra weight is noticeable when I go uphill but I gotta say, this bike is a dream! And with some Extralight Compas Bon Jon Pass Compas tires, the ride can be described in one word: deluxe.

Our goal was just to complete the ride at a "moderate" pace so we would finish in 12 hours or less which would let us could catch the evening Amtrak passenger train back to Seattle. We were going to stop at every aid station but not dawdle. Mission accomplished. Of course "moderate" is 100% subjective. This fact was hammered home just seven miles from the start as Frank ramped up the pace to 27+ mph heading south on Lake WA Blvd. I began to get concerned...

Our group was quick. As such we attracted other strong riders. This was usually okay unless that rider was inexperienced. Several times one of us would pull off of the front and the next guy would promptly drill it and jack up the pace very suddenly. One repeat offender was this guy in a "Speedy Bike Club" jersey that finally needed a gentle talking to. 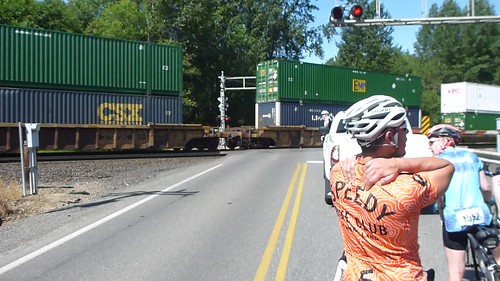 After that we all got along.

I carried much of my nutrition and it worked really, really well. But this sustained effort at this pace was a bit beyond my current level of cycling fitness and in the last 50 miles I started to fade. Then, with perhaps 30 miles to go, another super strong rider that we had collected punched it on an incline and I was off the back. Ouch.

Thank goodness my friends are awesome and John dropped back to collect me and pulled me back after the summit. With perhaps 20 miles to go this happened again and this time it was Frank that brought me back to the group. Phew, I was just barely hanging on.

Going up the last climb to St. John's Bridge I felt like I was moving at about 5 mph. I suspect this is only a small exaggeration. From there to the finish is all urban riding with lots of traffic lights so it was no problem keeping up.

Here I am at the last aid station trying to get up the motivation to get back on my bike. 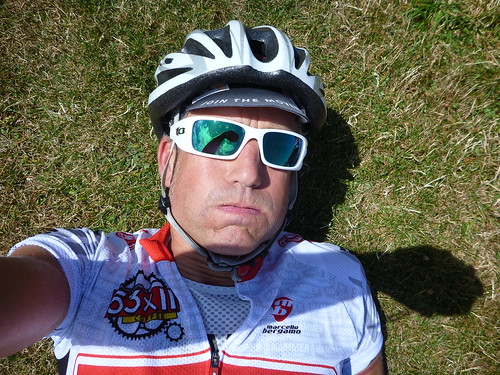 The finish line festival was incredible! 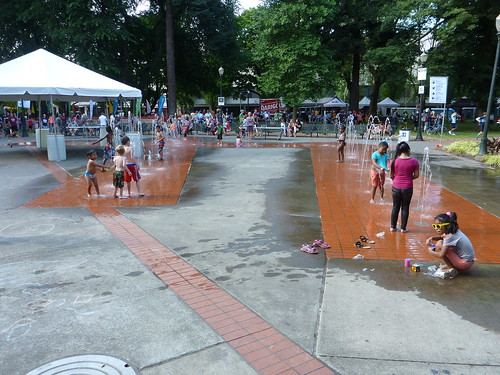 First of all, shower trucks! Can I just say I have no idea how some people hang out in their gnarly chamois for HOURS AND HOURS after a ride? Two words: Petri dish. #amiright

Here is a very refreshed Martin. 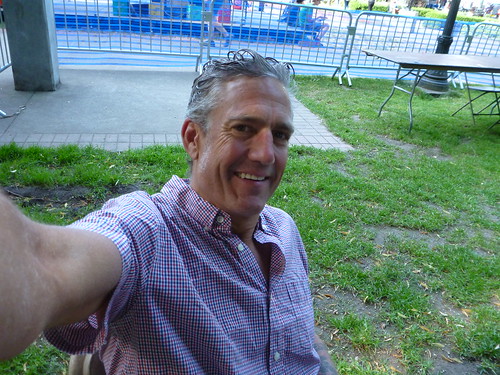 After getting cleaned up we headed into the Fremont Brewing beer garden. And then we got some food. We had our priorities straight. Plus, you can't bring beer to the food but you could bring food to the beer, just sayin'. Our event number included a meal ticket good for one entree from any of the attending food trucks. Oh yeah. Long story short, we ended up with some extra drink tickets AND meal tickets. In short order, I was moving very slowly.

Finally we hopped on the commuter train which took us to the train station. 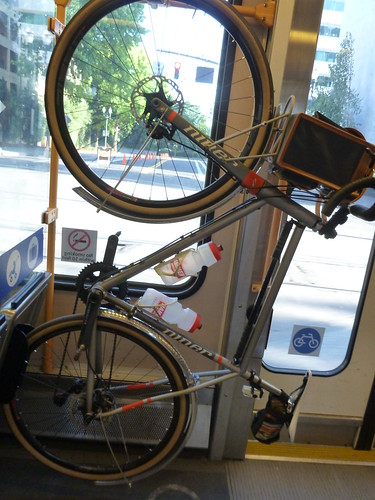 I love leaving the "driving" to someone else. Be it handing the keys to a friend or taking public transportation, not having to deal with traffic is a freaking dream. And the seats on the train were very comfy since I had upgraded to Business Class. I listened to podcasts, zoned out, snacked, and continued to relax all the way back to Seattle.

Where Shelley, who had just finished working an evening shift, picked me up from the station! Do I have it easy or what. That's obviously rhetorical.

This ride was great! Having such ideal conditions sure didn't help. At the start AND finish, I ran into David Douglas who has done more for cycling in the Pacific Northwest than most. I saw a few friends along the way including lifelong cycling advocate Ed Ewing and witnessed the usual variety of cycling rigs and cycling attire that one tends to witness when a group this large assembles for a ride. Yes, we saw the recumbents and the hybrid bikes with platform pedals but I'm sure we were spared some of the choicest views as the two-day riders started after us. Here is one of my favorites. 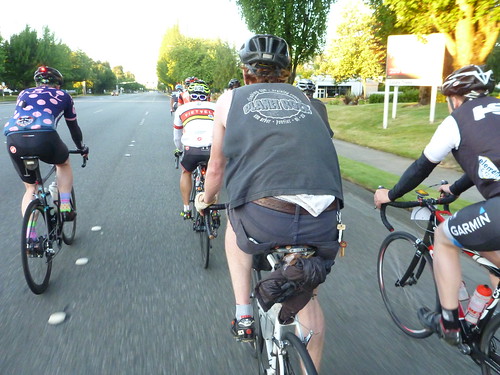 This look is straight up vintage ENA Couriers from back when all they did was deliver by bicycle and were the only bicycle messengers to use road bikes. Note the cutoff jeans shorts over the cycling bib shorts (a staple!) and note that the bibs are not even over his shoulders to maximize the airflow under his 100% cotton Planet Rock tank top. And of course he's got his phone in one back pocket and his wallet in the other. For 200 miles! Also, Sidi Dominator shoes (there are no others) and cantilever brakes on an old cyclocross frame. Did I mention crochet cycling gloves? It was like finding a time capsule.

Thanks SO much to John and Frank for getting me there, I had a blast.