Sometimes you sign up for a race and you end up being a pacer. Or, sometimes you decide to run a race with a friend and one of you has a bad day.

In 2016 I ended up running the last 30 miles of the Pine to Palm 100 with Paul Morrow. This got me through a very low point and I actually recovered and then ended up coaxing Paul to the finish when his tank was empty. A few months ago, after discovering that we are both going back to Pine to Palm, I suggested that we run the whole thing together. He agreed so the next sensible step was to find a "tune-up" race to see how compatible we were these days. The Badger Mountain Challange 50 mile was that race. Turns out today was a replay of the last 15 miles from Pine to Palm. 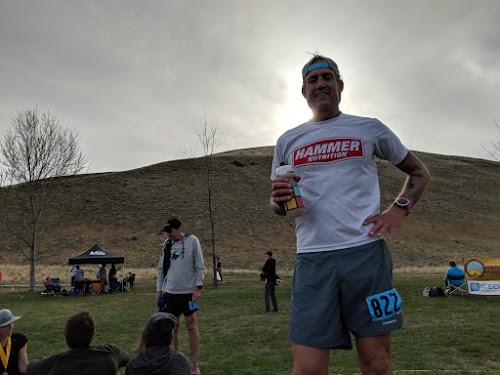 I pulled into the Tri-Cities Thursday relaxed and early. After checking into my hotel I got my race packet and then drove over to the pre-race dinner. Now I know everyone LOVES pizza and salad but when it's Dominos and literally just a giant bowl of shredded iceberg lettuce (with some sort of thick, syrupy, non-descript dressing) I was kind of bummed. Thank goodness the church that was hosting this dinner had a social event the night before and there were no less than three big trays of pulled pork that the race organizers served us. Nice! The church building, on the other hand, was a little frightening. 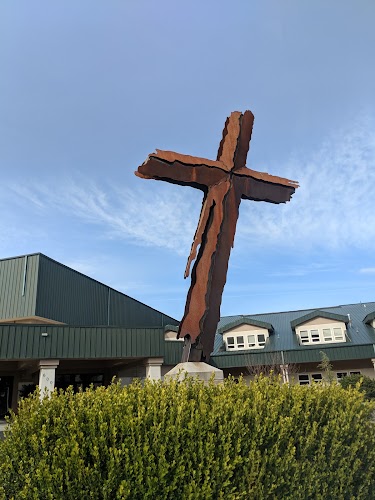 Not needing to eat in the mornings gives you loads of extra time so I kicked back in what turned out to be a very comfy bed at the Red Lion Inn and relaxed with some Law And Order.

I've been working hard on my pacing and fueling and it's been paying off. The first test this year was the Chuckanut 50k and today was the second. I got to the start around 6:20 knowing we were heading out at 7:00 AM. There was ample parking and it was close so I was also able to make one more stop at the restroom. With about 10 minutes to go I connected with Paul, everything was working out splendidly.

This course starts by taking you straight up Badger Mountain. That's fine with me but in just 100 m Paul was pulling away and my heart rate and power were dangerously high. I caught up to him and said I needed to slow down and thankfully he realized he needed to as well.

This course is beautiful! On a nice day anyway. And it's exposed! Unlike on the other side of the Cascade Mountains, there isn't a single tree in sight and tumbleweeds are the tallest plants I saw all day with the exception of grape vines in all the vineyards. I hear it can get windy out here and thankfully it was not too bad today. I'm also SO grateful it was not cold. The forecast was for 70 degrees and I don't think it ever got quite that warm but I was able to remove my arm warmers in short order and only had to put my gloves back on a couple of times when the wind picked up.

None of the hills are very long on this course but some are very steep. The trails on Badger Mountain itself make use of switchbacks but everywhere else they are eschewed and I was super glad to have my trekking poles with me today. A couple of the climbs were just giant gulleys so you went straight down and then straight up the other side.

I could have sworn that Paul told me he wanted to tray for sub 8:00 today but when I brought this up at dinner he demurred and said he was hoping for 8:30. Whew, I'd be lying if I said eight hours had not gotten me pretty nervous. I would be happy with 8:30 too so I was doing some mental math as we ran to keep this time goal in sight.

For 10 miles we were looking good. We were running with this 18-year-old girl (18 looks like 12 to me these days so I was doing frequent double takes in disbelief) and it turns out she finished in almost exactly eight hours. Nice.

Around 13 miles in Paul slowed up a tad. No problem I thought, we'll just shoot for 8:30 which was his goal anyway. At 15 miles Paul slowed again. At 20 he slowed again. At this point, we had to maintain our pace just to make 9:00. The aid station at the turnaround (this course is an out-and-back) is just shy of halfway and it's on top of a hill. I was hoping the descent would help Paul but he slowed again. Ouch. I was feeling bad for him. He said he just could not speed up on the flats or the descents and that his quads were tight. Looking at his hobbled gait almost made me cramp up!

The irony of today was that I was feeling fantastic and should not have been nervous about our tme goal at all! I'm not usually much of a talker on runs but now I was chatting Paul up, offering him my drinks, gels, and just generally encouraging him along. A couple of times he told me I should run on ahead but it would have been a major dick move to ditch him now and it wasn't like I could salvage even a nine-hour time at this point so we hung together.

Running pace and cadence is interesting. Pretty much the entire second half of this race I could not run at Paul's speed. I had to jog ahead a bit and wait. Repeat. Or walk really fast. Sometimes I would let him get a gap so that I could jog a little more before I was walking again. Here I am waiting for Paul after running ahead somewhere past the turnaround. 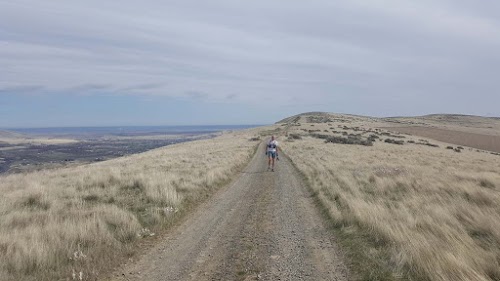 I picked the wrong day to leave my camera and phone behind. :(

Poor Paul! And things did not improve. Around this point, I figured we'd be lucky if we broke ten hours. Then, with about 10 miles to go he told me had a blister. When it rains it pours.

But there were highlights! 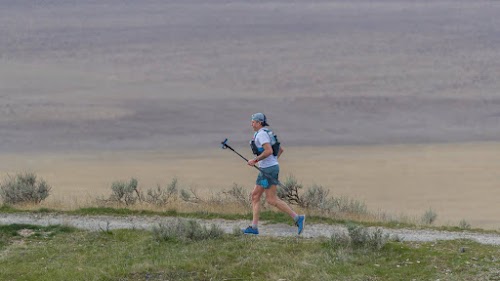 This post run shot sums up my race pretty well. 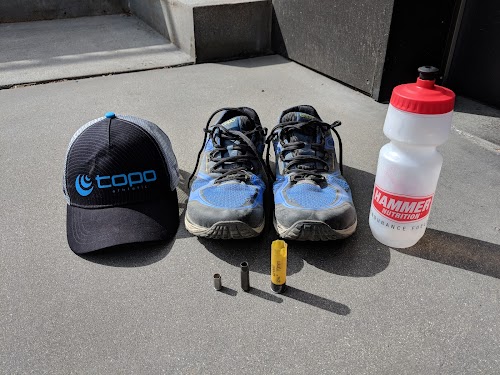 I thought this would be the last run for this pair of Topo Terraventure shoes as the uppers are wearing out on the sides but they held up! And after a thorough rinsing, they don't look half bad. These have become my go-to trail shoes and I love them.