Oh man, this course is legit. I've been wanting to run the Yakima Skyline Rim 50k for five(?) years but something would always come up be it a last-minute time conflict or an injury. Not this year. In fact, this year I felt pretty good! Bring it! Well, this event delivers. My (overly optimistic?) time goal going in was six hours. I didn't make it. I had no good idea what I was getting myself into.

Here I am before the start. 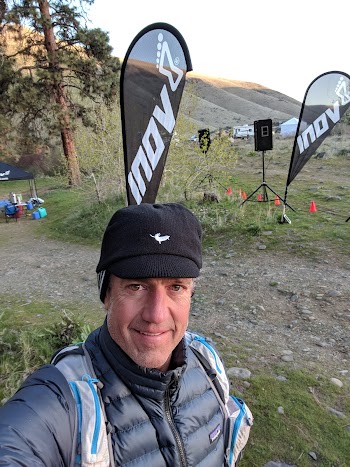 And here I am after the finish. 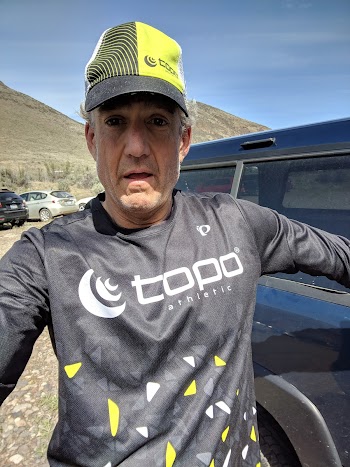 The weather forecast for today was pretty perfect. I have heard that it can get pretty hot up on the ridge in April (which honestly was part of the appeal for me...) but the expected high was just 65 degrees and the only issue was some strongish wind that might crop up. Hanging around the parking lot I was initially bundled up but as the start got closer it became obvious that I could start in the same outfit that would finish in. It's nice not having to carry clothing.

I arrived relatively early and got a good/not so good parking spot if you catch my drift. 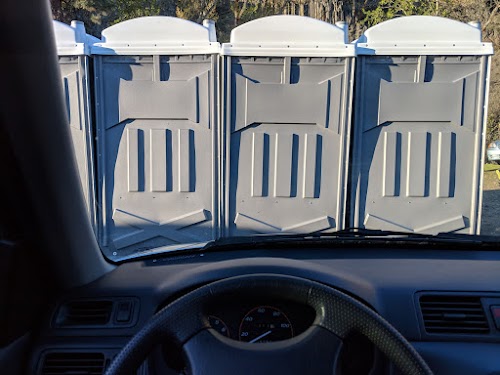 I've been using trekking poles a LOT lately and loving them. When they're carbon, they weigh nothing and you just don't feel a penalty for carrying them around. It's been a game changer for my back and now my legs and cardio are the weak links instead, which is how it should be really. It was always so frustrating (and uncomfortable!) when my back would blow up before I got to the finish.

So imagine my disappointment when I broke a pole halfway into this race. I tried to repair it with duct tape but no dice. I really needed a dowel or something to stick inside the pole and with the break being right next to the spot where it collapses, that wasn't possible. Here is a shot of the damage after I got home. #landfill 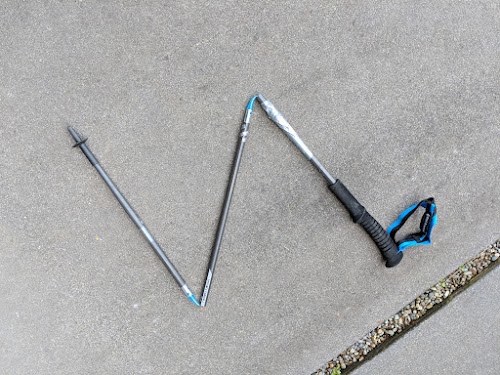 Another thing that I've been loving is the fact that I have not fallen down while trail running in ages. Well, that changed today. I fell three times. Early on the first descent, maybe 100m from the halfway point, and then on the FLAT approaching the last descent. I don't think I was being especially careless and I wasn't that exhausted, this is just a very rocky course and I needed to pay more attention. I broke my pole in my second fall. After taping my pole up I took off but the first time I planted it, it folded. Damn, two big climbs still to go.

I ended up stowing the broken pole and just using my good on with both hands in turn, 30 seconds in the right hand, 30 seconds in the left, repeat. It made me realize how much I need poles! If I want to go fast anyway. I felt like my wing was clipped.

I saw a lot of people I knew today. Which is always so cool. Mitchell Burbick and Meredeth Heestand showed up with about 15 minutes to spare. Out on the course, I saw Brad Hefta-Gaub, Van Phan, Yassine Diboun, Phil Kochik, and Maxwell Ferguson who put in a super effort which was rewarded with a great result in this high caliber field.

I also saw lots of people that knew me but I did not remember them... :( The volunteer at the intersection near aid station #2/6 kept shouting encouragement at me and I must have looked like a deer in the headlights. It was kind of funny really, as I ran past the first time he was like, "Right on Martin! Way to go! OH...!" That was when he saw the blood running down my right shin.

At least a half dozen people shouted greetings to me on the trail and mentioned me by name. I'm the worst.

When I got to the halfway point, this aid station volunteer practically runs up to me and shouts, "I read your blog all the time! What can I get you?" What a surprise, it made me smile. After he filled my bottle he grabbed some wet wipes and offered to clean my knee and shin. He kept saying, "This going to hurt..." but it never did. And I didn't have time to hang around and let him do a thorough job. :( But thanks so much Mr. Aid StationVolunteer! I left looking better than when I arrived and that did a lot to buoy my spirits just minutes after my second tumble.

On the bright side, each time I fell, one person would pause and see if I was okay. That's trail running community.

The views from up on the ridge were spectacular! Descending to the halfway point I saw Mt Adams and Mt Rainier. So beautiful. In fact, the views were amazing all day! I had to keep reminding myself to look down.

My power was a bit lower than at the Chuckanut 50k. I attribute that to the following.
After getting 2nd place in my age group at the Badger Mountain Challange 50-mile race, I wanted to win here. So for the first time ever, I checked Ultrasignup to see who was registered and what their expected finishing times were. Turns out John Fiore, the person that beat me by five minutes at The Rut 50k was signed up. Our expected finish times were about 10 minutes apart (his was faster). This was going to be hard. In the end, he beat me by 13 minutes. If not for some of the items on the above list it would have been a great race! But kudos to John, he didn't fall, and he's two years older than I am.

The wind did pick up around mile 20. Across the top of the last hill, it was right in our face. On the last descent, it was blowing so hard that I got moved sideways just a little when both of my feet were off the ground. Impressive.
Other than my scrapes (which are not very bad luckily), my only "injury" was a badly stubbed toe. I think it was the cause of my first fall. Ever since switching to Topo shoes my toenails have been in great shape but I'm going to lose one after this race.
After finishing and (not really) getting cleaned up I headed back to the start/finish for some of the great food that Rainshadow Running always provides. 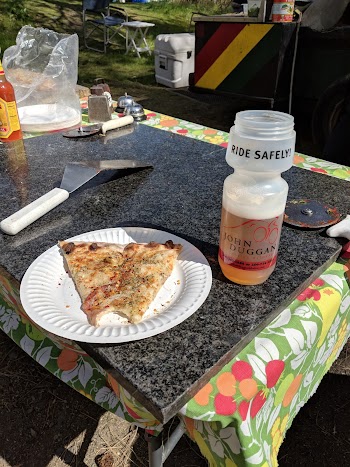 That bottle used to contain my other recovery drink.

This course is hard but it's also amazing. Assuming you don't run in these conditions every day already. So glad I finally made it! I might have to come back and see if I can go faster with no mishaps. Or try some new event. :)

Results
Nutrition (before)
Nutrition (during)
Nutrition (after)
Gear
Here is my power analysis for this run.
at 9:45 PM