I attempted the Chirico Tenpeat once way back in 2014 and wasn't able to finish it that year. It's pretty tough. This year I did finish and to my surprise, it was in 2nd place!

Here is the glory shot. 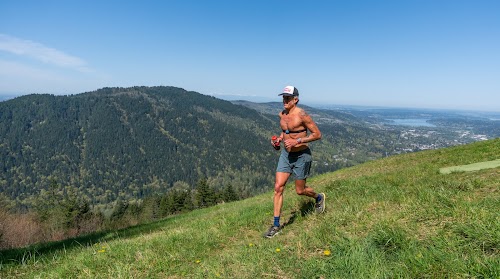 For an "event" this one is super low key. It's officially not official with no permit, aid or timing. People just agree to show up, be respectful of other trail users, and support each other. That said, the aid station here rivaled the best I have ever experienced. Everyone who was here is a trail runner and they understand what other trail runners like! The event is only advertised on the Seattle Mountain Running Group Facebook Group. It's usually the last Wednesday in April, a weekday avoids some of the hiker traffic on this popular trail and the time of year hopefully does not conflict with most people's "A" races.

The premise is to complete 10 laps of the Chirico Trail from the trailhead parking lot up to Poo Poo Point and back down. Each lap is about 3.6 miles and a little over 1,600' of elevation gain. It's entirely "challenge by choice" so the number of laps you do is totally up to you. Some people just do one, some a few, and a handful always try to complete all 10. Folks that want to go for all 10 need to start at 7:00 AM, those that don't can start any time they like. Back in 2014 I started out too fast and lasted for eight laps. And lap number seven and eight were very tough. My first lap in 2014 was about 50 minutes and my last one was about 60 minutes. This time, for reasons I'll go into shortly, my first lap was about 55 minutes and although I did slow down a tad on lap 9, my last lap was also about 55 minutes. For me, that is awesome consistency and means I metered my effort pretty darn well.

I started out slower this year for two reasons.

Here are the 10-lap hopefuls at the 7:00 AM start. I'm in the back row with the blue shirt and white hat. 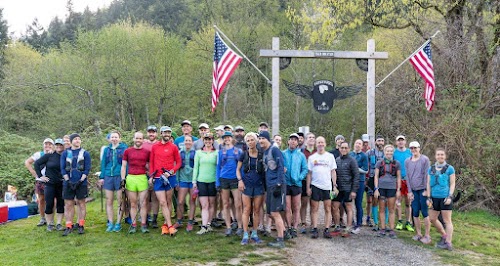 Note that several people in the above picture are holding trekking poles. I am not. I love poles but was conflicted for this event as I also wanted to travel light and since the weather was supposed to turn fabulous (it did), I knew I also wanted to take my shirt off later. My dilemma was how do I use poles and only carry a hand-held bottle? The answer eluded me so I opted for light and hoped my back would last all 10 laps.

This trail frequently consists of stone steps. Even a couple of the flat sections are paved with stones. It's really fun until it's not. All that bounding down steps annihilates your quads and in my opinion, it's all the descending that makes this event as tough as it is. Most people can go uphill, some are faster than others but most can pace themselves and keep going. But after this event, everyone is sore in a way that climbing never affects you.

I was carrying one 24 oz. bottle with me and drained it each lap. As the weather got warmer I had to supplement my bottle with extra fluids each time I arrived at the aid station.

Another thing I did better this time around is I never stopped moving. After all this pounding my legs want to lock up when I stop so I would make my pauses at the aid station as short as possible. I literally just filled my bottle, grabbed a bite, flipped a yu-ee and got the heck out of Dodge. It sure helped.

ASIDE - I think some famous runner once said, "Don't walk when you can run, don't stop when you can walk." Or maybe not. But I see variations of this quote bandied about pretty frequently. Whatever.

It was an AMAZING DAY. Not too hot, not windy, just what I needed. And the views from this trail are nuts for being so close to the city. Close to the top, there is a field and across the filed Mt Rainier is staring you in the face. At the top, all the paragliders were taking off and it was pretty tough not to hang out and watch. A couple of times I saw two Bald Eagles riding the thermals just like the paragliders, so beautiful.

Poo Poo Point is the most popular local takeoff spot for paragliders. There is an astroturf "runway" and you literally deploy your sail and run off of the edge of Tiger Mt... 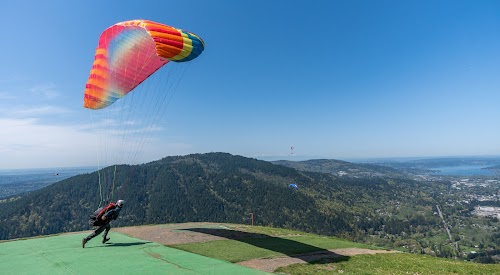 My nutrition has been way better this year than even last year. I'm finally consuming the right amount AND the right stuff to keep me going. Lately, the only limiter seems to be my fitness as I have not bonked or had any gut issues. Planning this out also makes me much more efficient at aid stations. Here's to that trend continuing!

I wasn't looking at my watch much as my main goals was just to finish all 10 laps. But it's good to have multiple goals sometimes and my other one was to finish in under 10 hours. When I did look down after lap number eight, and knowing how much I slowed down in 2014, I figured 10 hours was out of reach and actually slowed down on lap nine.

And then my watch went into low battery mode which means the display goes black.

As I got to the bottom after lap nine I pressed a button on my watch and to my chagrin, saw that I had 1:02:00 left to still make it under 10 hours... Ouch. This meant I had to push on this last lap. And I tried.

There is only one intersection in this trail and both options take you to the same place but one is more direct/shorter/steeper. If you look at my GPS data below, you will see that I took both pretty equally. I started with the steep route, then switched to the flatter option after a few laps. On my last lap, I went back to the steep option as I know it would save about 30 seconds in each direction.

Believe you me, when there are hikers blocking the trail and you need to come to a full stop while descending quickly on wasted legs, it is hard to do it!

My watch had gone black again so I didn't look at it until I was perhaps 100m from the finish. I pressed a button and saw that my elapsed time was 9:54. Holy cow... I was going to make sub 10!

I'm always impressed by how much "smelling the barn" or knowing that you are going to achieve your goal does to alleviate discomfort. When I saw that number on my watch my face totally relaxed, I smiled and I almost forgot about my legs. Okay, not so much that last one, but I did feel better.

I finished, stopped my watch, wrote down my time (everyone tracks their own time on the honor system) and sat down on a cooler. Which I promptly fell off of. Wow, my legs were weak! 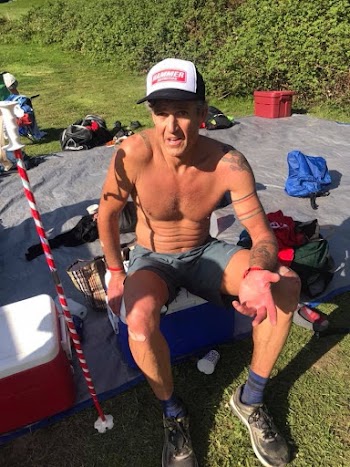 For the first time since last summer, I had salt crystals on my skin. Man did it feel good not to move.

Here is a shot of the "podium", the guy in the funny tiger hat (remember this event takes place on Tiger Mt) is Nikolay Nachev, the winner, and the guy in the plaid shirt is George Orozco. 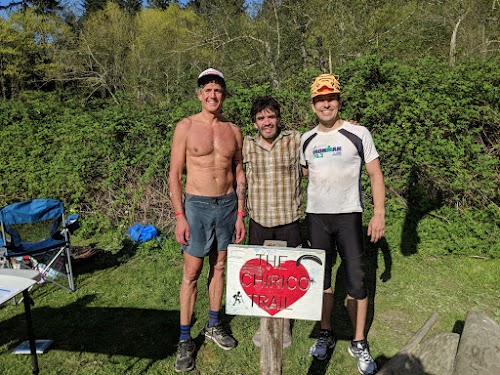 What did I learn today (because you can always learn something)?
Lastly, thanks to Jess Mullen who has organized this event each year. On this day (and the previous day) she was Everesting and did 18 laps. Nice.
Here are all my pictures.
Results
Nutrition (before)
Nutrition (during)
Nutrition (after)
Gear
Here is my power file.