Rampart Ridge + Mount Margaret this time of year = first tracks in the snow! 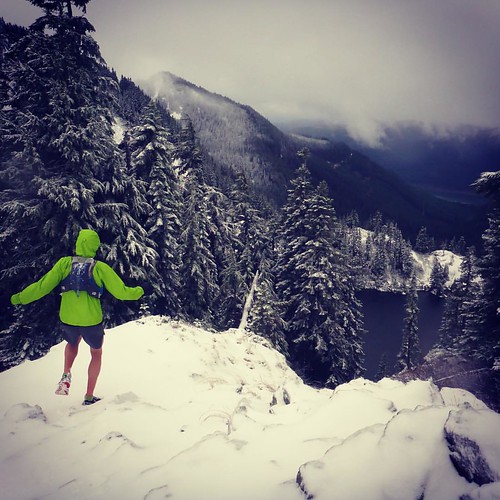 Today I connected with Gavin Woody and we headed up to Snoqualmie Pass for some fun in what we hoped might be snow. And luckily it got cold enough because it was WET below 4000'.

Starting any run in the pouring rain is a crapshoot for me. On occasion I'm psyched up and ready to go splash around in the mud but sometimes it's a really drain on the old spirit. As we jogged away from the car I hadn't yet made up my mind what today was going to be.

In my favor it was relatively warm and I had on a great jacket. The only thing bothering me was the jacket hood acted like an echo chamber and some cord kept slapping against it almost driving me crazy. But the rain would wax and wane so every few minutes I was able to take the hood off which was a big relief.

After two miles of dirt road we hit the trail. And it was a river! Right away there was no avoiding getting your feet good and wet and Gavin quipped, "Well, that's out of the way."

The trail up to Rampart Ridge is pretty steep so we were mostly hiking and at this speed the cord didn't slap against my hood so my mood was improving. Did I mention that we had just switched from Daylight Saving Time to Standard Time? In spite of the early start I was feeling well rested and we didn't have to start with lights. Bonus.

Suddenly we noticed that the trees were getting dusted with snow. 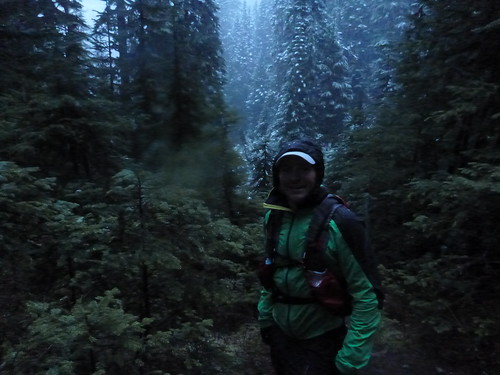 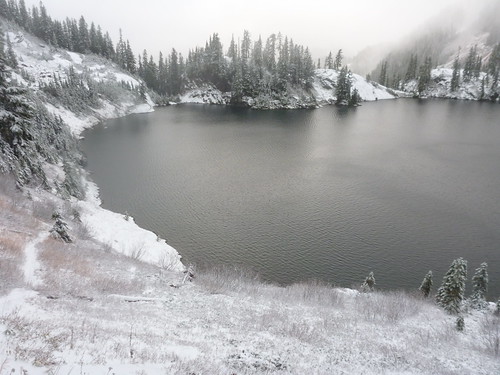 Thank goodness my feet and legs were feeling fine (as was my core) but after a bit my hands started to fail me. Rats.

The wind was really howling up here and since my gloves were fairly wet I had to eventually ask Gavin to turn around. Knowing my hands like I do it was just a matter of time before I caused some damage and I only had fun on the agenda today. Luckily Gavin was fine with turning back a little early.

Once we got back in the woods the wind was a non-issue. We found the fork in the trail, headed over to Mount Margaret, my hands started to feel better and the smile on my face just kept growing wider and wider.

Here is me filming Gavin, who when he realized it, started to film me.

Note big black shadow over lens, it was tough to work my camera with gloves and lobster overmits. It was also tough to keep the lens dry. Oh well.

Running down the snowy trail was incredible. You hardly had to watch where you foot was going to land because the snow filled in the gaps.