It had to happen sooner or later, I just ran my first beer mile!

Thanks to Geoff Roes for hosting this event at his Alaska Mountain Ultrarunning Camp and to Dakota Jones for participating and making me look good. 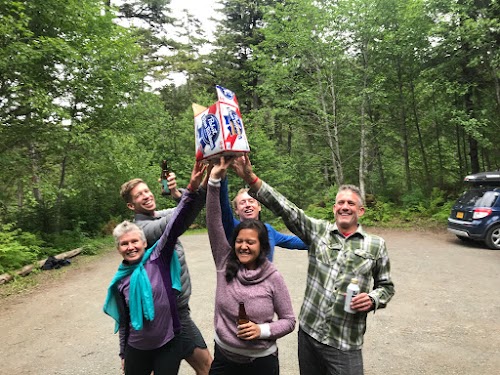 Pictured left to right are Tracey, Cam, Nina (in front), Dakota (in back), and Martin.

Note that three of us are drinking even more beer after running this race... at least we took a break to shower and change clothes.

This Beer Mile was part of a week-long running camp in Juneau, AK. After our third day of running, we drove back to the Shrine of St Therese where we were staying in the Jubilee Cabin, put on some dry shoes and got to it.

In true Beer Mile fashion, we used generic, American lager that was 5% alcohol (PBR at this event). Less is cheating and more would be silly. Like this event isn't already...

The course was NOT flat. We started with a lap around the cabin and then headed down a gravel road hill. At the bottom was a fire hydrant we had to tag and then it was back up the hill to drink your next beer. On your last lap, you had to finish with two laps around the cabin since the out-and-back was just under 400 meters. According to Strava, I gained almost 250' total so that's' roughly 60' per lap.

Of the eight clients at this edition of the running camp, only three stepped up. Luckily so did Nina (camp staff) and Dakota (guest celebrity).

The five of us lined up, held our first beer at the ready and waited for Geoff's start command.

LAP #1
ASIDE - truth be told, I was counting on my drinking serving me well in this race... At least two and perhaps three of the other competitors were faster runners than me, some MUCH faster.
LAP #2
LAP #3
LAP #4
OMG, I won!
Many stars aligned to give me this victory.
This is the first, and I suspect last, time that I have ever beaten an elite runner. Nice. I'm going to let that sink in for a bit.
I'm bummed that I could only find one picture of me at this event.
Results
Nutrition (before)
Nutrition (during)
Nutrition (after)
Gear
at 9:00 PM