As I type this bit while watching some live cyclocross and eating my breakfast I'm hoping I didn't bite off more than I can chew...

A couple of weeks ago my sister Lucca announced that she had entered the Amica Seattle Marathon at the last minute and so just as impulsively I announced that I would pace her. During the entire race! Lucca is hoping to go sub 4-hours and that seemed entirely doable to me so I told her I would carry gels for her and carry sports drink for her and when you combine that with some food and drink for me (since I am not entered and can't use the aid stations) suddenly I am feeling like a pack mule. Not so fast in other words.

Did I mention I also volunteered to carry her phone so we can take pictures along the way? Yikes.

At least the forecast is for 40 and clear. Rain would have sucked. Besides, what are siblings for? To be honest, I have been looking forward to the day when I can really truly support Lucca at an event like this.

[Time passes while Martin and Lucca run the Seattle Marathon...]

How did it turn out for Lucca? PR baby, by OVER THREE MINUTES. Nice. 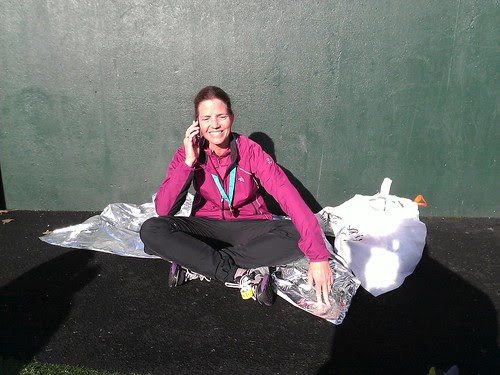 The worst thing about these official events - especially road events - is all the standing around in the cold. Sure they have a bag check but you still need to ditch your warm layers WAY too early. Luckily for me Lucca was amenable to leaving the bag check area just 15 minutes before the start. Whew. This was plenty of time to hit the porta-potties one last time and then enter the corral of runners. As usual, there was the fast crowd way at the front dressed just in singlets and maybe arm warmers as a concession to the cold. Not me, I was freaking bundled up.

I tried to start my stopwatch right when we crossed the start line and away we went. These mass start events mean you are going to slalom through loads of people, guaranteed. But Lucca was a pro and it did not seem to mater which one of us was in front, we stuck together like a well-oiled machine.

All the way through downtown we were making super time but it's also mostly downhill. One of the jobs of a pacer is to not blow up your runner and I have hardly ever run with Lucca so all I had to go on was her stated goal of going sub-4. But she seemed comfortable and has run way more marathons than I have so I figured all was good.

Running through the I-90 tunnel was really fun! It was warmer, the sound echoed off the walls and again it was downhill! I tried to snap a pic but obviously I was too rushed and it turned out pretty blurry... I mean FAST, Lucca was going so fast that the camera just could not keep up. 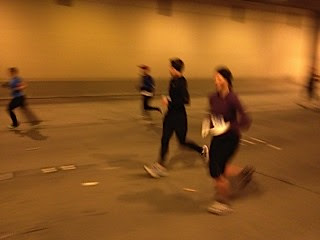 Running across the I-90 bridge was the coldest part of the run because we were exposed to the wind but it was not bad at all.

ASIDE - there were toilets everywhere! In the tunnel, on the bridge, along Interlaken, everywhere. It was awesome even though I never had to use one. It cracked me up to see a single toilet in the middle of the I-90 bridge with one guy waiting outside because someone else was inside. What lousy luck.

Heading down to Seward Park was easy. I just kept letting Lucca know what her pace was. On the way back we discovered that one reason it had been so easy was that what little wind there was was blowing out of the north. :) Not a big deal though, it was less than 5 mph.

The second half of this race has the harder (and longer) hills and is more difficult than the first half for sure. We cruised past the 13-mile marker way ahead of schedule but again, I was keeping Lucca informed of our pace and she seemed unperturbed so I decided not to worry. I had been giving her gels, Nuun and a Stinger Waffle on a regular basis so knew she was well fueled. Bring it! The hills that is. :) 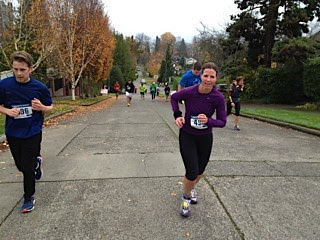 If you look closely, you will see that most of the people on this hill are walking. Not Lucca.

We cruised up here at 9:15 and Lucca even had the presence of mind to ask me for a gel at the top. Nice.

It was here that we met Shelley, Shannon Gearing (Shelley's sister) and my father for the second time. It was SO great to have this support! We got some more cowbell, cheers and I got a fresh bottle of Nuun which was great because Lucca had drained my first one.

This was also where Luca's friend Robert met us for more pacing assistance. Yes.! Plus, Robert's phone was taking better pictures so huge plus having him along. :)

Another benefit of having Robert along was he is great at math. With about two miles to go he announced that Lucca was going to finish in 3:55! Lucca didn't want to believe him and this seemed like a bit of a stretch to me so I just shut up. Turns out he was only 52 seconds off, that's damn close.

Lucca did slow a bit along Interlaken after all the hills but she picked it up again along Lakeview Blvd E (which was when Robert made his expected time announcement).

On the last descent heading towards the stadium I ran ahead up the last hill to get some more pictures. 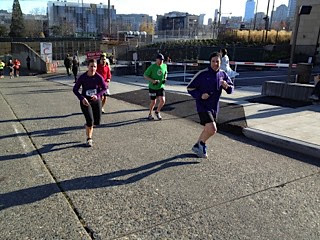 Heading into the stadium I detoured away from the finishing chute but not Robert! He ran right across the finish line with Lucca. Way to go! I had no idea this was allowed but after we finished I heard the race announcer mentioning pacers so I guess I could have. :( Oh well, next time.

Lucca has only gone under 4 hours once previously and ran a 3:58 that time. Her goal was to hopefully go under 4 again and to help her achieve this was a HUGE boost. How big is that smile? Very; that was a rhetorical question. 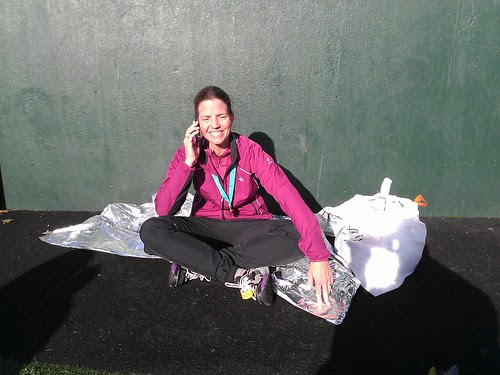 Out on the course I saw a ton of people that I knew. Folks like Chase Mueller, Bradlaugh Robinson (who qualified for Boston with a ripping time!), Uli Steidl (who won the overall AGAIN), Lang Reynolds and Rhae Shaw, Mike Adams, what a blast.

Thanks so much to Shelley, Shannon, Bill and Robert. I will cherish this experience for a long time. And congratulations to Lucca! With about one mile to go we joked that all that was left was for her to decide how hard to make the next PR. :) 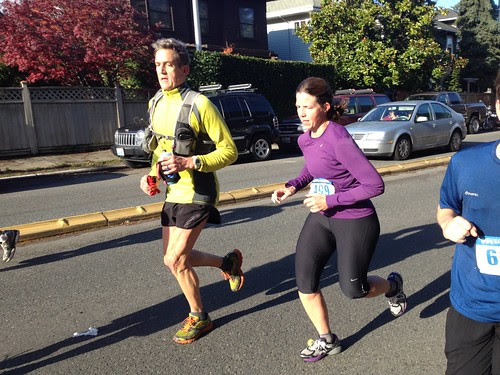