It's that time of year again, the time when people joke about how casual they are taking their running and about how little they have trained and how fat they are and then go out and drop their friends on a big hill.

Running is not so different than cycling at times.

I have participated in the WA Fat Ass run two(?) times? The first time I hiked it with Shelley and two friends several years ago and then last year I ran one loop with some other friends and this year I was back to try one loop again. With me was Edgardo Balansay who is really taking to trail running! I believe this was going to be his longest run ever? Nice.

This event has no official timing, results or support. Unless you count doughnuts. 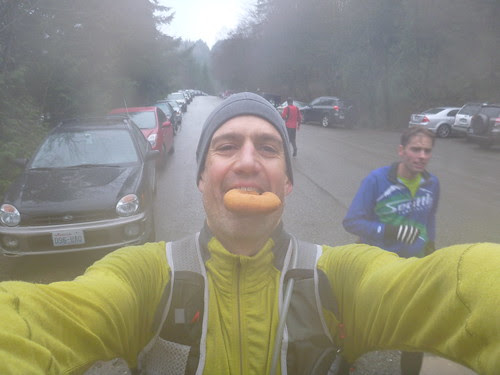 AT 8:03 we got the go-ahead and started jogging up the road. Right away some folks pulled ahead but I was not concerned about time and just wanted to 1) have fun and 2) make sure Edgardo had fun. So we hung back a bit.

Apparently Edgardo didn't get the memo though as he seemed like he was chomping at the bit. We scooted past a few folks and then in the woods I got this fun footage running behind Win Van Pelt.

I had forgotten what this official Fat Ass route is like and it's surprisingly flat and even downhill at the start. The instant we got to the first descent Win was gone. I was sort of hoping to run with him today so once we got to the flats and I saw him up the road I asked Edgardo if we could slowly reel him in and Edgardo promptly practically dropped me. Guess I was still warming up.

After about two or three miles the trail starts to tip up. Here I pulled back Win, then Edgardo and then a few others. I wasn't feeling great but I guess I was going uphill just a little quicker than those that started faster than me. I was leaving Edgardo behind but didn't worry about it on this freeway of a trail and just resolved to wait at each intersection.

Up, up and up we went. I was puffing pretty good by this point but I kept pulling back rabbits so did not walk too much. Just as I caught Mike (the guy in the red top) we hit the snow! How did I know his name? I was talking to folks, trying to be social and all. :) 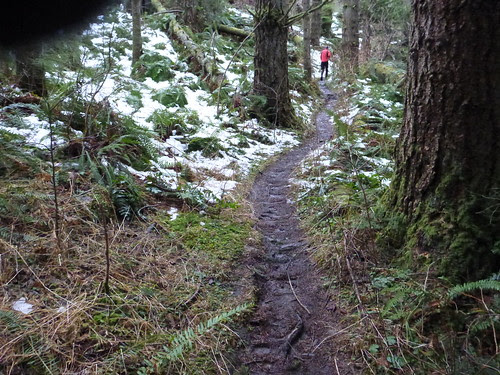 Taking the picture let him get up the road again but I managed to reel him back in. The next time I waited for Edgardo he was not far behind me at all; way to go.

After the first climb there is a long flatter section and it was covered in snow. Other people had trampled a path but it was really narrow and the snow was still sort of soft so I had to kind of prance along lifting my feet higher than I wanted and always slipping around just a little. It sure took some extra effort to run this bit but we did.

Then another climb! This one is steep but suddenly I am feeling better and I jogged every time I could and went up here really well. I kept catching folks but after chatting I discovered that most of them were doing TWO laps so I not feeling to superior... Someday I hope to be that guy that can hold this pace for the full 50k but it is not today.

At the first summit I got another picture. I was feeling super, Edgardo was doing super so as we were about to start the big descent I told Edgardo try and stick with me.

Mike was descending really well so I hung with him. As we started down we had to avoid what seemed like about 100 hikers. It appeared like a large Japanese group had come up and most of them were just about to  summit. We had a few close calls and once Mike and I even ran off the trail to avoid people but it was fine and no contact was made and I said hello and excuse me each time.

There was some thin, hard packed snow on the trail but I didn't give it any mind. We went around one switchback, then another and then 'POP'.

Oh man, I had rolled my left ankle really, rally bad. That pop was not in my head, I could freaking hear it! And ironically it was when I was running on dirt and not snow.

For a few steps I was totally hobbling; then I tried to jog and then I could almost run. For some reason not letting Mike beat me to the bottom seemed like an important thing and so I tried to pick up the pace and sort of did for a bit but it was not nearly enough and he started to run away from me. Once he was out of sight I started to walk to asses the damage and for some reason I could still put weight on my foot if I stepped straight down, I just could not flex it much in any direction.

As I walked Edgardo caught up to me and so I tried running again. Incredibly it worked and as I continued to descend I could not help but wonder if I was doing more damage to my ankle or not... Toward the bottom I even gave it some gas as Brian Maher caught me and I accelerate to hang with him. it worked but then I decided to wait for Edgardo again - it sucks to finish these things alone.

As Edgardo pulled up so did Win! Nice. We ran the last half mil of dirt road back to the cars together. And wouldn't you know it, just as I had the cars in sight Mike passes me. :) Turns out he had taken a wrong turn and was obviously busting ass on the way home.

There was a signup sheet at the start but the line was too long so I bagged it but now there was no lone so I signed myself up and out before grabbing a doughnut.Done.

Then I limped back to the car, changed my clothes, drove home, barely got out of the car and got even more sore. Four Ibuprofen and two hours of ice thankyouverymuch. Actually, thank you very little. I sure hope this is not too bad.

Kudos to Edgardo for hanging tough all day! And to Win for being my carrot. :) Negative kudos to my fancy (and expensive!) GPS watch that failed to connect with satellites twice during the run today. My only consolation is that Edgardo's Garmin Edge 500 also failed to connect at least once at the same time as my first blackout. Could it have been just that cloudy? I dunno, this never happened with my small, cheap Forerunner 405.