Today I did my second ever single speed mountain bike race and man was it different from the first one I participated in...

- The first race (Stottlemeyer 60) was in the woods, this one (Echo Valley 60) was out in the open ALL the time and guess who forgot their sun block?
- I didn't even average 10 mph in the first race, in this one I hit 30 mph and knocked over 60 minutes off my time for the same distance. Yes, I was running the same gear.
- Equipment really matters, I chose some condition-specific tires for this event and it helped. I'm not sure anything would have helped me in the first race.
- In the first race I hit the deck three times, this time I came away unscathed.
- In the first race I kinda faded during the middle and only partially recovered in the second half, in this one I stayed pretty strong throughout.
- I had to get off the bike and walk several times in the first race, there was only one spot each lap that I could not ride in the second one. 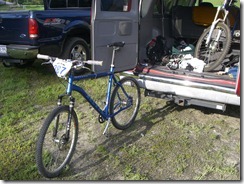 Since this race was north of Lake Chelan Shelley and decided to make a weekend out of it and camp and then do some tandem mountain biking the next day. It was a good call.

We pulled into our camp site early Friday evening after eating at Mythic Pizza (very good food! great beer selection!) so no one was rushed. I like that. The race was at 9 the next morning so we also didn't have to get up incredibly early.

6:00 AM – the alarm goes off but of course I had been up for quite some time purging all the beer out of my system...

This place is cool. We tried to rent a cabin at the start/finish but they were all booked ages ago. Judging by the beautiful scenery it's no wonder and I will just have to live and learn. Not only are the hills really pretty this time of year but I bet the skiing is pretty damn good in the winter. Note to self, maybe I don't have to drive all the way to the Methow Valley?

I changed my clothes, had a snack and a drink, aired my tires and finally hopped on my bike to make sure it was working. One super nice thing about a single speed is if the tires hold air and your chain has oil on it you are pretty much good to go. Except for today.

Just riding out of the grassy field we were parked in my cranks/bottom bracket sounded like they were going to snap in half! There was a massive creak coming from the bottom of my bike but of course there was nothing I could do about it now. I put my trust in the equipment I was riding (da Vinci cranks and Phil Wood bottom bracket) and rode up to the pre-race meeting. Where we were told this course was FAST. So fast in fact the event organizer was asking us to use caution in the corners.

ASIDE – what did I see in the first hairy corner not five miles into the race? Some guy on the ground. In the time it took me to catch him and pass him he did not move. Ouch.

The organizer finishes his speech and then says, "Okay, 50 seconds until the start." Suddenly the road got really crowded with people pushing their way to the front. Then bang, off we went.

The first 2.2 miles were up a gravel road and luckily the grade was very doable on my bike. I had to stand a few times but mostly I just muscled it and there were even some flatter sections were I was spun and all the geared bikes would come roaring past me. This was kind of the pattern for the first half of the race; I would do well compared to the other riders on the climbs and then they would all rip past me in the big ring when the road or trail flattened out. But it was hard to keep track of how many people were in front of me... As we got close to the top of the road I could still just barely see the front of the bunch and thought to myself, "Man, I'm doing better than I thought!"

This course was RIPPING. 90% of it was double track and it was all pretty smooth so when the trail tipped downhill you could really fly. There were a couple of spots on the first lap where I scared myself. Like one bump in the trail where I caught some air and then there was a turn RIGHT IN FRONT OF ME. That or I would be hauling ass down some narrow path on the edge of steep slope and it would suddenly dawn on me that if I made a mistake I would go sailing a looooong way down that slope before I came to a stop. None of the climbs were terribly long and traction was ample. All systems were go as they say.

And then my back started to hurt. Rats.

Usually when my back starts to crap out it just gets worse. Sometimes it deteriorates slowly and sometimes it happens quickly. I was just 15 miles in and thinking to myself that this was going to be a long damn day if things got worse so I tried to relax my back, my grip on the bars and hoped for the best. And damn if it didn't slowly get better. Let's hear it for small miracles.

On the first lap it did not feel like I was passing people but I had passed quite a few on the dirt road climb to get to the trail. On the second lap I did notice that I passed a few people but a few passed me back too. The third lap was confusing as I was in the midst of the 30 mile racers who had started 30 minutes behind us. It wasn't until the fourth lap that I figured out I was doing well.

I had kept an eye out for the other single speed bikes. I figured trying to keep up with the geared bikes was a lost cause so once I figured out that the guy in yellow (for example) was on a single speed I kept my eyes peeled for yellow. On the fourth lap said yellow jersey suddenly came into view.

All the events in this NW Epic Series are VERY well supported. So well in fact that you don't need to carry anything except maybe one bottle. My massive CamelBak made me feel kinda out of place but it did contain my pump and tubes, etc. so I tried not to be too jealous as I saw riders with practically nothing in their jersey pockets and no pack at all.

I rode the first lap non-stop but then would pull over all the aid stations, there were two in each lap. Every time I grabbed something to drink and shoved food in my mouth all the other bikes would pull away. Once I got going again I would slowly reel them in. During this last lap I finally managed to leap frog past yellow jersey. At the last aid station (10 miles from the finish) I even managed to pull out as I saw him approaching so that was extra incentive to push the pace.

During this lap I also managed to catch and pass a lot of geared bikes! What do you know. Turns out single speed bikes are not necessarily slower. In fact, second place overall at this event was a single speed! Impressive.

As I hit the dirt road section for the last time I know I only had about one mile to go. For some reason I got this huge smile on my face every time I looked back and saw that yellow jersey was nowhere to be seen.

One of the single speed riders I hooked up with in the middle of the race was Zack P. He was riding a beautiful bike with 29" wheels. We were both running the same gear so that meant with his larger wheels his effective gear was bigger. And man could he descend. We managed to chat a bit and turns out he has spent loads of time riding at Whistler. Nice. That will help your descending.

I would ease ahead of him on the climbs and then he would sail past me on the descents. Unfortunately he started to cramp a bit about two laps in so that was the last I saw of him.

The descents were interesting. My bike is fully rigid so I couldn't ride through anything and had to flow around it. There were a couple of blind turns and obstacles that I figured out after one or two laps and so my descending kept getting better and faster as the race progressed. I gotta say, hitting a blind corner at what would appear to be excessive speed and knowing you can negotiate it because you have knowledge of what is around the bend is a rush. RUSH.

After my first single speed race I had a blister on my left palm and my hands were quite sore. Not so after today! I was totally fine.

Shelley noted that the vibe at a mountain bike race is pretty different than at a road race. Unfortunately I concur. With the exception of a few serious folks that line up at the front, everyone else is here to have a good time and people were encouraging each other out on the trail and it made me feel all warm and fuzzy to reciprocate. At a road race people are so introverted and tense by comparison. It's too bad.

What's next? Well, since I did the long distance for the first two races in the series the next event is the Capitol Forest 100. Yikes!