Funny how short the attention span of the average American is.

Not long ago people were anxiously awaiting the end of the world – at least according the families I heard interviewed on NPR – (or obliviously watching shite television depending on your level of awareness) waiting for the rapture that was promised to arrive on May 21 2011. 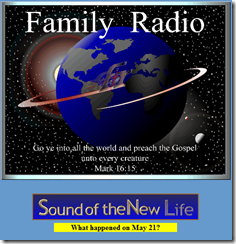 And nothing much happened as far as I could tell.

You gotta love the explanation of the delay; and of the whole 'rapture' thing really.

Basically it amounts to you don't know, only we know. And those words you have been using? The ones like 'earthquake' and 'rapture' and whatever else we decide is relevant? Yeah, they don't mean what you thought they did. I'm right, you are wrong, neener neener.

Pretty easy to win an argument if you write the rules is all I gotta say.

What I wouldn't have given to be able to conduct follow-up interviews with all the families that timed their budget so ALL money would run out exactly on 21 May. I heard people proudly extol their checklists.

I wonder how this manner of misleading people is any different from some sort of financial swindle like a pyramid scheme or Bernie Madoff's Ponzi scheme. I suppose there was no financial requirement to believe Harold Camping; in fact he didn't seem to care much one way or the other what you thought. After all, there wasn't any way that he could grow those that would be raptured as the selection process was 100% in god's hands. Feel like repenting? Go for it, ain't gonna help you tho.

And besides, I firmly believe you can only protect people from themselves so much.

Maybe it's a good thing we can remember anything (read: hold a grudge) too long or Mr. Camping would would be in big trouble.