Where should I begin? How about with some links.

And how about with some terminology.

Little Princess – Granny Gear
Flat – To quote the organizer there is 'flat' and there is 'Portuguese flat', we rarely encountered the former.
Roman Cobbles – Here in America a cobble stone is essentially a brick. In modern Portuguese streets a cobble is about half that size. Back in the Roman days a cobble was a f'n huge block of granite that was roughly hewn so that it almost appeared to be flat if viewed from a very great distance. We rode on several (and walked on several more out of necessity) Roman cobbled roads.
Breakfast – Bread, butter, cheese, cold slices of ham and jam, 200 mg yogurts, fruit, fruit juice and coffee. Can't forget the coffee. Sometimes we were treated to eggs, sausages and various other forms of warm ham.
Lunch – Sandwiches made with above bread, butter, cheese, ham and jam. Often supplemented by more sandwiches from cafes, ice cream, Coke, ice tea, fruit and pastries.
Dinner – Bread and olives (and sometimes cheese) followed by vegetable soup followed by pasta and meat. Sometimes we were treated to boiled vegetables or fish and sometimes we also got rice and salad and we always had wine; several times we had both red and white.
Salad – Green lettuce ornately arranged in a silver metal dish covered in slices of tomato and onion all drenched in olive oil. In all 14 days the standard salad that got served with dinner never once deviated from these four basic ingredients.
Salad Dressing – Olive oil and vinegar; is there anything else…?
Dessert – Custard, sweet rice pudding, fruit, chocolate mouse, cheese cakes, cream cakes, biscuit cakes, chocolate cakes, cookies, flan. OMG there was a lot of good stuff…
Kenda Nevegal – Shit tire. Oops… that comes later.
Mild – Hot.
Hot – Really, really hot.

Back in 2007 I competed in TransPortugal which is a race that more or less covers the same route as this tour. As soon as I had completed the race I began to fantasize about the tour and how much fun it would be to ride these same roads and trails without the pressure of a competition. Two years later Shelley and I purchased an Ellsworth Witness MTB tandem and started talking about doing just this. There were times when we waffled and times when we wondered if we would be able to prepare properly but we kept taking the bike out into the woods, riding our road tandem and eventually we had plane tickets and there was no backing out. So it begins.

About two months prior to arriving at the airport I had called Delta Airlines and asked 1) if we could fly our tandem to Lisbon and 2) how much it would cost. After speaking with what was in hindsight a totally clueless representative I was quoted $200 one way. Kind of expensive I thought to myself but hey, it's only about twice as much as a single bike so it almost seems fair. As we hurried to load the car in front of our garage I realized at the last minute that I had forgotten my folding multi-tool so quickly grabbed it and stuffed it into my carry-on bag.

Until we arrived at the airport I had NO idea how much our bike box weighed. Under the completely aghast stare of the woman behind the Delta counter I hefted the box on the scale and saw in disbelief as the numbers rose into the triple digits. Over 100 lb. Needless to say the person helping us had never seen a box this big, this heavy and had no idea how much to charge us.

She called over her co-worker and the longer they talked the higher the price went. Soon I was paying the bike fee plus an oversize fee plus an overweight fee. The total? Something like $625! Even they could not believe it so one of them called over a manager to escalate the situation. Thank goodness too because this woman was very kind and actually tried to help us. She explained that a bike is already by definition oversized so that was one surcharge we did not have to pay. Still, the total came to $500; what could we do? Our flight was leaving in less than two hours. We lumped it and paid. To top it all off the Delta (Seattle to Amsterdam) people could not guarantee that KLM (Amsterdam to Lisbon) would take our bike on the plane. Again, what could we do? We crossed our fingers and headed off to boarding.

As my bag got x-rayed the TSA guy behind the metal detector asked me if I had anything sharp in my bag. I'm like, "Of course not." So he pulls me aside and opens my bag and extracts my multi-tool. Turns out one of the widgets is a tiny serrated blade…! "What's this then?" he asks and all I can do is murmur something about a bike tool and how we're going on a cycling trip and how I really need it. And you know what? He hands it back to me, gives me a wink and tells me to please check it next time. Yes sir, I sure will and thankyouverymuch.

The Schiphol airport in Amsterdam isn't so bad. There is lots to eat, several nice bars and some reclining chairs at the gates. 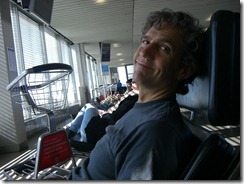 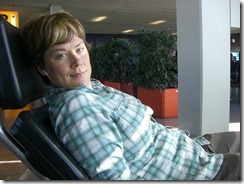 Once in Lisbon we wasted no time in getting to our hotel and then to the local supermarket that is under a bull fighting arena.

Here we get some dinner and snacks for the drive to the start the next day.