I thought Today was very close to an actual stage from the TransPortugal race, stage three to be exact. Then I was reminded by a current client on the tour who was also a former staff person on the race that we had managed to add about 50 km to this day. Time heals all wounds and all that.

The first 25 km or so were fast. It was pavement and hard dirt road and a net loss in elevation. Some time after the first cafe stop (and some hills and bridges) we rolled through this village and the locals were grilling sardines; and they offered us some! 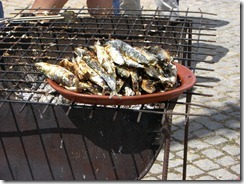 Not only did they offer us sardines, the also had sweet rice. 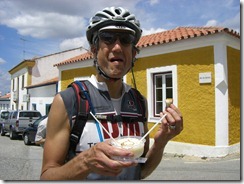 And wine! I passed on that though. Amazing how good salty fish can taste on a long, hot day. Did it matter that we had recently had lunch? Nope, I was ready to eat again.

After gorging we had a couple of moderate climbs, rode along a river and then came the steepest climb of the entire trip. It was up a dirt double track, about 1 km long and we were told it was 30 percent. I believe it. Even if you wanted to try and ride it (we were told only two people had ever done so) there was a stream crossing right at the bottom and then you had to ride over some boulders so there was absolutely no opportunity to get any momentum. This climb was tough. 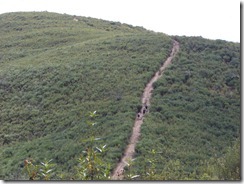 So tough we did not even bother to try and walk together. 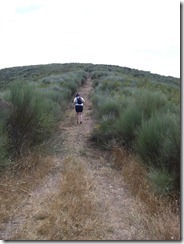 At the top was more eucalyptus forest, some trails over big granite slabs, the usual route finding on a path that was so overgrown no one would have found it if not for the GPS, a bit of pavement and then the surface turned to cobles as we started the last climb up to Castelo de Vide.

I had forgotten how hard this ascent was... It just goes up and up and gets steeper and steeper. Then near the top you have to ride UP some stairs. In spite of a valiant effort at the beginning our tandem could not handle this so it was another hike. 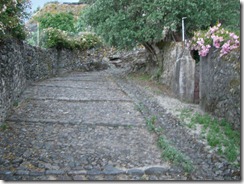 The hotel for today is in one of the prettiest villages of the entire tour. It's at the base of the hill occupied by the castle.

ASIDE – that's right, the route took us to the top of the hill and then we descended to the hotel instead of just riding directly to it. The Travessia is about the journey, not about getting there as fast or efficiently as possible.

It also reportedly contains one of the best bakeries in all of Portugal. Unfortunately we were too bushed to go for a stroll and enjoy any baked goods and after cleaning the bike and doing laundry I restricted myself to the hotel bar. 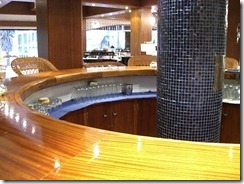 The owner of this hotel LOVES Antonio and really goes all out to support the clients of his tour and race. They let us put our bikes in one of their carpeted meeting rooms and actually spread out freshly laundered white sheets to put our bikes on so they would not get the carpet dirty…! 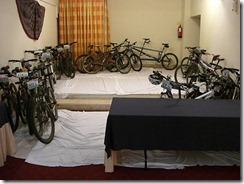