"This stage can be hard or it can be easy..." was how Antonio began the briefing last night. Today was the shortest and flattest stage so everyone was urged to take it easy and 'recover' as there would not be another stage like this again.  Oh yeah, and tomorrow was hard.

Since today was short and since there would not be much to do at our destination the start time was pushed back to 11 AM for the less fast group and 12 PM for the faster group. This would hopefully give the rain a chance to blow over and let everyone enjoy the town and castle we were in. There was only one problem, it kept raining.

But not all was for naught, we had time for a very leisurely breakfast which was a real treat. And if there is one thing a five star hotel knows how to do it's serve up a fantastic breakfast. We had ham (hot and cold), eggs, rolls, bread, croissants, butter, preserves, fresh fruit, various cereals, coffee, tea, milk, fruit juices, cake, three different kinds of cheese, yogurt and an amazing old school toaster oven to heat anything you wanted. I think I went back for thirds; but was able to take my time for a change. :)

As we loaded the bags into the van and prepped our bikes the clouds looked like they might just blow over and the rain abated. Then five minutes prior to roll out it got really dark and everyone started pulling raincoats out of CamelBaks... Not 200 m from the castle gate the rain started to fall. And it kept up for the next 25 km. But it least it was not cold!

The sandy roads that should have been nice and firm were now a sandy beach and our tandem would float back and forth anytime the road surface got more than an inch or two deep. Exciting stuff! There were also some sections in super tall grass so you could hardly see the intended trail and the rain had turned the ruts into treacherous trenches. Because of the rain on my glasses and the overgrown path it was frequently an act of faith piloting our bike. Props to Shelley for not complaining and helping us power through all the mud bogs.

Lunch was at Café Suiss; a tribute to the throw-back truck stop. Guys in their twenties and thirties were chilling, smoking and flicking the ashes on the floor of the dinner. Ashtrays were on every table but the squash soup was super and we each devoured a big bowl along with two of our sandwiches that we had made from the breakfast buffet. 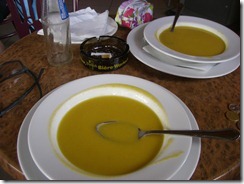 For once everyone seemed in a huge rush to leave the lunch spot... I think it was because of the wet. 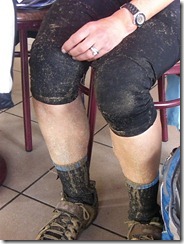 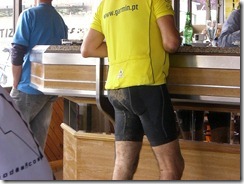 I had to keep my coat on when we left even though the rain had stopped as the wind was chilling.

Luckily after about 5 km the sun started to poke through the clouds and it was warm enough to stop and shed the coat and arm warmers. And then the road firmed up a bit too so we could roll the big chainring most of the time! Nice. Today we rode along the 'smuggler's road' which had been used to smuggle tobacco between Spain and Portugal. It's about 4-5 km interior of the main paved road and at times it's as if the road is a corridor through the forest as the greenery is very dense on both sides. It's extremely pretty. We also saw some cows, sheep and goats. TONS of goats... And whenever you could not actually see the sheep or goats you could see plenty of evidence of their existence – almost every meter of road today was littered with poop (droppings?). At times I was a bit worried about drinking from my CamelBak bite valve which along with my coat (and legs and feet) had been spackled with all the crap (literally and figuratively) from the road.

Oh yeah, we can't forget the dogs. It seems Portugal has cornered the market on stray dogs. Speaking with someone that has lived here it seems like spaying and neutering is a totally foreign concept and it shows. Some were herding animals, some were just giving us company but some were loud and kinda scary and got a little too close to the bike for comfort.

The last few kilometers were a lot of fun. First because we were not exhausted and second because it was just great mountain biking! We rode over more granite slabs, through tunnels of green and across stone bridges. 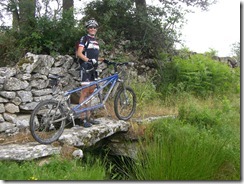 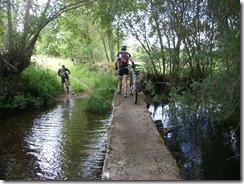 Finally with about 1 km to go we could see our destination. Tonight the hotel rooms are truly microscopic; it's like a doll house room. But there is a hose for cleaning bikes and an outdoor clothes line! It's amazing how handy that is.

As I sit in the hotel bar supplementing my 20 cl Sagres (what is it with that size?!) with a more traditionally sized Super Bock as backup it has been a very good day. 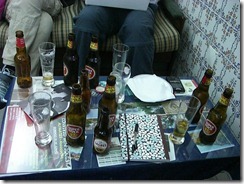 Sure we had some rain but it was relatively warm and fun. This trip continues to amaze.