We rolled out of the hotel at 8:30 (earlier than normal) which meant we had to eat at 7 and of course get up at 6. Not so fun. But the day went well and aside from one mechanical problem (of course) we both did the best we have so far on this trip.

The beginning was a very nice rolling road with a hard dirt surface. Around 4 km in we got to the big climb of the day but the dirt part was not so bad and once it got steeper and the grades were more sustained it turned to pavement. We climbed up, up, up into the mist towards the ridgeline that was dotted with windmills. The fog was so dense that at times you could only see part of the windmills (for power generation) and I absolutely felt like we had stumbled on some technology left behind by more advanced aliens thousands of years ago as we saw the massive rotors sweep around and around and heard the hum of motors and transformers from the base. It was very surreal.

Descending from the ridge was a kick in the shorts! This was also new pavement and there were zero cars – super safe. We got the tandem up over 60 kph, on knobby tires!

From here we skirted the border between Portugal and Spain for several hours. The surface was red earth with tons of shale rock. You were constantly climbing or descending and when the clouds cleared the views down into Spain were spectacular. We rode everything except for one steep/loose kicker and one massive climb that might have been doable but would have completely torched our legs. Today was the day that I had resolved not to die or bonk or get dehydrated and so our pace was more controlled, I drank a lot and I brought along FIVE cheese and jam sandwiches and with Shelley's help ate at very regular intervals. And it worked! Thanks Shelley. 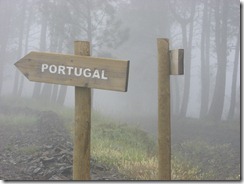 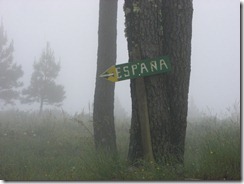 We finally descended from this ridge and rode through a wildlife preserve that is normally not open to the public. Antonio had called ahead and a ranger was waiting at the gate to let us through.

ASIDE – this is just one example of the lengths the organizers go to in order to ensure we are able to ride on the most remote roads possible.

This took us down to a river that is a natural border between Spain and Portugal and we followed the river for quite a while. This was a super road. At times fairly overgrown but it stayed pretty true to the contour line so did not rise or fall much and instead just hugged the ridge. Anytime we came to an adjoining valley or tributary the road would simply turn away from the river, follow it in and then all the way back out so as to maintain our elevation. It made it imminently rideable.

Finally we came to the first river crossing (into Spain).

ASIDE – prior to this river we had to carry the bike across three 'streams' and under two fallen trees. It was adventure cycling for sure. Not to mention that the trail completely disappeared once and had it not been for the GPS we would have had absolutely no idea where it was... 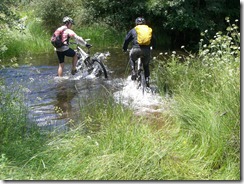 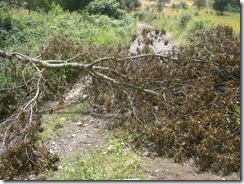 Along the way we also encountered a herd of black sheep. 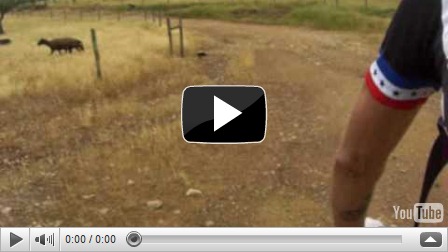 The trail simply went to the river and stopped. Luckily this one was not so deep and I was able to carry the bike across myself. 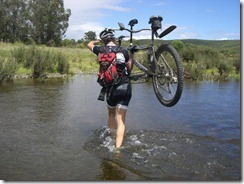 But only because Shelley scouted the path. 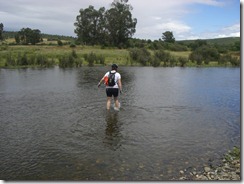 And after we got the low-down from a local. 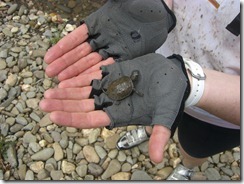 After 7 more km of dirt road we came to the second crossing (back into Portugal). This one was up over my waist! Shelley and I had to lift the tandem overhead while negotiating the slippery river rock. A couple of times I thought one of us might get dunked but we made it thank goodness. Then I made another trip for our CamelBaks as they would have gotten dipped in the water if we had left them on while carrying the bike.

The hotel was less than 1 km from the last crossing so even though we were now soaked and had soggy chamois it was okay. And the water in ALL the streams and rivers had been very comfortable – not cold at all.

About 40 or 50 km from the end today we shifted to the small chainring and instantly got chain suck. It soon became apparent that with the amount of wear we had on the inner ring and the chain that this was simply not avoidable so from here on we were limited to the middle ring. Luckily there were not so many grueling climbs and we managed most of them. The rest we simply had to walk. We also threw off our timing chain twice! The first time was because it was too loose. I had noticed it earlier in the day but figured it would be okay. Not so. The second time I have no idea why it came off... At least it was easy to put on both times and I tightened it up in the process.

Our hotel is in a geothermal area and there is a spa and hot pools and the 'rooms' (suites rather) consist of four rooms, TWO bathrooms (each with a shower!) and I feel like I am in some Euro resort. Which I guess I am. :)

Tonight I performed some serious bike maintenance. I had brought along three spare chainrings but not the tool to remove my crank arm. D'oh…! So I had to settle for installing a new drive chain and new middle and outer rings and checking to ensure our timing chain was not getting loose again. 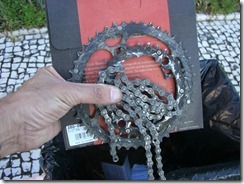