After installing a new cassette we rolled out and right away the road went straight up. First the paved street steepens and steepens and then you turn left onto a gravel road and it really pitches up. Ouch! Not the ideal warm-up. The next bit was okay, quite scenic actually. We rolled around a plateau for a while and stopped at a scenic vulture feeding site (no shit!). 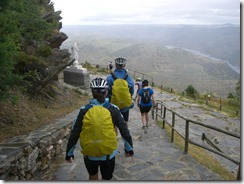 After another hard dirt climb came a dream paved descent. The road was narrow, only one car could have fit on it at a time – obviously there was no center line – and we FELL down the valley. Oh yeah, no guardrails either. 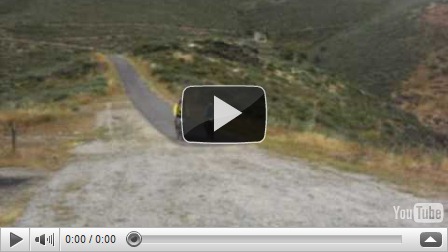 Descending to THE Roman road.

Next came the most famous Roman road of the ride. Back in the day when this road was essentially carved out of the cliff it was the only way to provision the village at the top of the plateau. Not only was it steep it was all stone. The only bummer was it had been sprinkling and the stones were ultra slick in the wet and the tandem could not negotiate many of the switchbacks. But we tried and I think we did better than anyone expected us to by riding about 25 percent!

Then it was off to lunch in the next town (hot soup) and the hardest climb of the day. OMG was this a killer... With honest pitchers of 18-20 percent you had little time to recover. About 3 km up the hill I shifted from the middle ring to the small and sucked the chain insanely hard. It was jammed in from the bottom and from the top because I tried to catch it by back pedaling. 10 minutes later and thanks to Antonio we were rolling again but I was seriously thinking we were going to have to remove the right crank. And of course I had no tools with me to do that...

Once we topped the steepest section came a part of the ride that I really like. You are in this high country that is desolate but beautiful at the same time. It's all grassy fields, big slabs of granite and the occasional massive rock plopped right in the middle of nowhere. Shelley did a phenomenal job on the climb and we only dabbed once when I steered us off the trail and into a bush. Not hard when you are going 2-3 mph.

Lunch (second lunch?) was in a café at the top of a hill at Castelo Rodrigo. 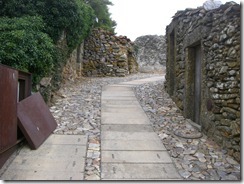 This hill was steep enough to keep us in our 22x30 most of the way and we had to resort to the 34 near the summit. At least it was paved. Nothing satisfies after a hard ride like dark beer and toasted cheese sandwiches. 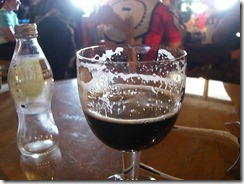 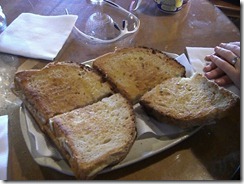 From here it should have been relatively easy to get to the finish but I ran out of energy with 20 km to go and my last cheese and jam sandwich that I frantically crammed into my mouth did not get assimilated quite fast enough to be of much assistance. After the initial descent from the castle you are on a red dirt road that is just slightly downhill so you can fly – that was a blast. 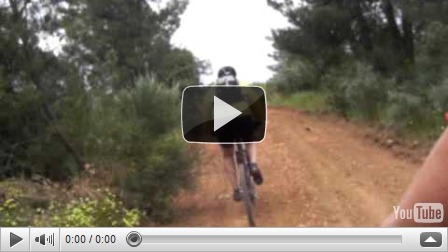 Needless to say it was very nice to finally arrive at the hotel. Which was AMAZING. Two words: five stars. It's built inside of a castle (on top of a hill of course) and you can walk the old castle walls and ramparts. Too cool. 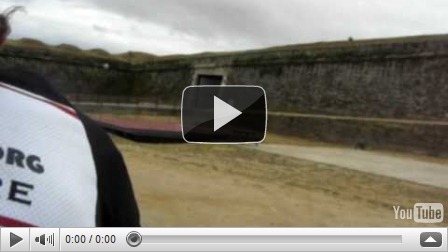 Once we got cleaned up I spent some time walking around the castle walls and the town next to the castle. 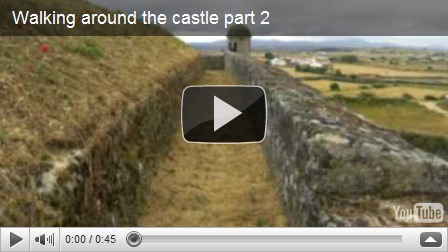 That night we discovered a wonderful Portuguese tradition – the fried (baked?) appetizer platter. 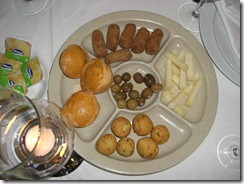 Ours had fish balls, sausage-shaped things and the largest item I did not try. In the center are olives and on the right are slices of cheese. Yes!

And don't forget the dessert… 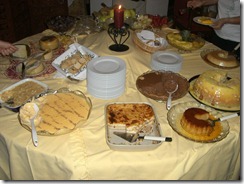