A relatively easy day today and after yesterday it was most welcome. We started out on dirt roads that rolled very gently for about 15 km and then came our first major obstacle. A Roman coble road. And by 'road' I mean the Roman's kind of pilled massive stones up along the route and called it good. It was a climb and so as we were still pretty much all together everyone prepped by shifting to their small ring and gave it a go. We lasted about 80 m? The total length was 800 m. Then our rear tire spun and we dabbed. I did not know a tandem could spin the rear tire so easily... Everyone lined up to give this stretch a try, it was like the skills test of the trip. And some did pretty well, it was fun to cheer each other on. 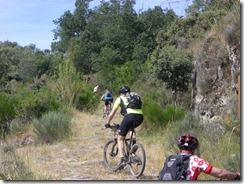 And it wouldn't be a day in Portugal without some major mechanical. Soon after the cobbles our shifting really went to hell and then suddenly on another climb the chain totally jammed up. We got off and I looked back and our third largest cog had been utterly destroyed! There were only about six teeth left and the rest of the cog had been torn off of the spider. Damn. So from here on in we had to exercise EXTREME caution when shifting past the gap. Thank goodness it worked though so as long as we could anticipate the need for the large cogs all was good.

As soon as we got that figured out we experienced some massive chain suck... I pulled over to oil the chain and realized I had left the lube in my duffel bag! Crap. Luckily Antonio (the organizer) rides sweep and carries everything, he had both wet and dry lube. He asked me which I would like by saying, "The wet will make everything really dirty and the dry will keep it clean..." You can guess which one I picked. And you know what? It worked very well. SO much about mountain biking is knowing the local conditions and what works. All the lube you you to use in the NW is wet. Wet lube in Portugal equals oiling your chain every hour because it attracts so much dust and dirt and suddenly you need to start over. While I was oiling the chain this kid came by herding some cows – on a bicycle. Nice.

The main natural obstacle today was an 18-20 percent climb that was fortunately on modern cobbles and not dirt. We did have to shift to the smallest gear for sure but made it up okay. One section of the trail today was over these massive slabs of granite and wicked fun. It was almost like riding in Moab on the sandstone. 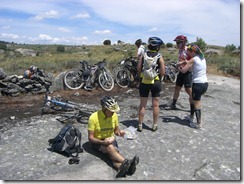 Towards the end we plummeted down this phenomenally steep paved descent. More fun! The very end was another brutally steep climb up to the town square on a cobbled street. Less fun but it was the finish.

Today began what I would later realize was a daily ritual – the cafe stop. What do you buy at a cafe when you are tired, hot and hungry? Usually it was something like this. 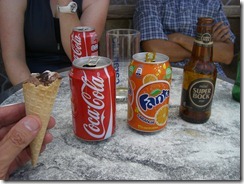 Of course we also ate our sandwiches that we had made in the morning. Shelley realized too late that she had overdone the quince jelly just a tad. 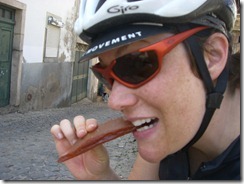 That was some fierce fruit leather!

Some of the water taps in towns were really beautiful. 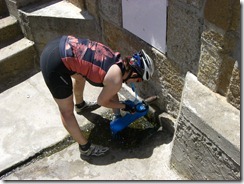 Another ritual we eagerly adopted was the post-ride beer and snacks. 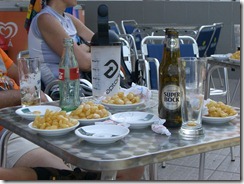 The beans in this photo are delicious and remind me of Edamame. Boiled, salty and oh so satisfying.

The routine upon arriving at the destination went something like hit the shower, do your laundry, hit the cash machine, hit the café, hit the grocery store for ride food and more beer, join the party at the local restaurant for dinner and then hit the bed in our hotel room. I could get used to this in a hurry.