Just one hill of note today at roughly half way through but JESUS was it tough... Oh yeah, our fist mechanical of the day was a failed rear tire. 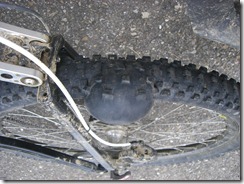 WTF?! I guess the inner casing of the Kenda Nevegal we were using had failed allowing air to get between the lining and the rubber tread. Not very useful. Fortunately I brought along a spare. Our second mechanical for the day was after replacing the chain yesterday we could no longer use the small chainring at all. Yesterday it was chain suck and today it was chain skip, like mad. Crap. How long was I a professional bicycle mechanic again? 15 years? I guess wishful thinking got the better of me last night. Needless to say 32x34 is NOT low enough for these monsters. Why didn't I replace the small ring again? Because I forgot the tool to remove the crank arm; I'm an idiot. Oh sure, the organizers had plenty of tools but my old-school, square-taper cranks were not something they had counted on.

We started out on mellow rollers and except for one or two were able to ride up them in the middle ring. We also came to a stream crossing within like 2 km of the start so the shoes that I had tried so hard to dry last night were soaking wet again. Nice. But it was a peaceful start – not too hard and quite rideable. That's a good thing to get the legs warmed up for sure. Much of the route yesterday and this morning took us through eucalyptus tree plantations. You would think you were in a wild forest but then you would notice that all the trees are equidistant and planted in neat rows. We rode through grove after clear-cut after grove after clear-cut.

The 'hill' today was Monsanto and is cone shaped. It's a massive granite mound with a castle on top and houses on all sides. The houses have been built in, on and under the granite rock and if not for the whitewashed walls or the windows it would absolutely resemble a bunch of caves. I have no idea how they run water and electricity up to all these homes but I did see lights on in one dining room. Under the cobbled streets perhaps? I saw no conduit or anything on the sides of buildings.

About 15 km from said hill you can see it. 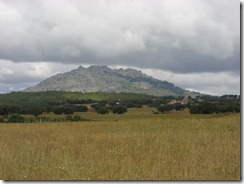 There isn't really any other hill like it or as tall in the vicinity so you have the pleasure of watching it get closer and closer as you wind your way through the fields on the approach. And when I say wind I of course mean that at times we went in every direction except towards the hill… Finally you ride through a 'suburb' of the town on the hill, cross the last asphalt road and hit the climb.

At first the surface is modern cobbles as you ride in and out of the last houses at the base of the hill and it was JUST doable in the middle ring, but only just. Then the path flattens a bit, changes to Roman cobbles and begins to literally spiral around the hill as it climbs. At first you can ride it no problem, in fact there are plenty of sandy sections that smooth out the surface but then the path gets steeper and steeper and bumpier and bumpier and if you make it this far you suddenly get to a couple of switchbacks that will bring anyone to their knees. Or feet in this case. 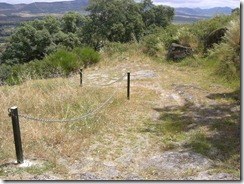 We had to walk about 1 km until finally the path joins the paved road. Mind you, it does not get any less steep here, but the surface does improve. It's Little Princess all the way to the top from here. About 1 km further up the road is a lookout and a café that is tucked into the rock on what must be a 15 degree slope. Somehow a massive tour bus was parked in the lookout parking lot – these drivers must go to some secret advanced Euro driving school... We pulled over, had some sandwiches and a Coke and then had to walk a couple of blocks when we decided to get going again because the paved road looked too steep to ride! Once we got back on it was one more switchback and the surface turned to modern cobbles again.

Everything is carved out of or into the granite here, even the public WC. 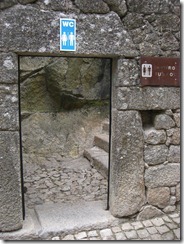 As you get closer to the castle the houses get smaller and smaller and the 'road' gets narrower and narrower and steeper and steeper until you are riding/walking by one and two-room 'homes' that have been not so much hewn out of the rock as just strategically placed under outcroppings and boulders with the gaps filled in using smaller stones and mortar. Finally, about 100 m below the castle the trail turns to stone stairs. On the way up to the castle are dozens of what look like stone pens for animals? And then finally you are at the top. Wow, the view... and it's 360 degrees. Here we are walking the tandem up the last bit of road before it turns to a total footpath. 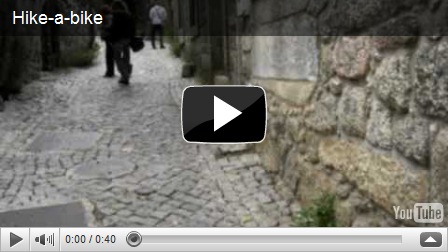 How do you get down? Well, on paths and roads very similar to what you came up on of course. It was actually too steep to walk down in our cycling shoes (not enough tread and too slippery) so knowing the tandem has phenomenal brakes we got on and road down. Did I mention if was steep...!? What's really hard is navigating a tight corner when you are tipped down the hill and your suspension fork is completely compressed. After about 1 km of this you transition to another Roman cobble road and for the next 1.5 km you are bouncing down the hill.  It's rideable for sure but some sections are VERY exciting as the gaps can be big and there are some small drop-offs. We could not ride it all. Finally you get to the bottom and transition to the valley floor via dirt roads.

On the way to the hotel we hit a 10 km section of road with one wicked descent where we must have topped 60 kph again. Knobby tires sure are loud at those speeds, almost as loud as the plane that buzzed Shelley today. 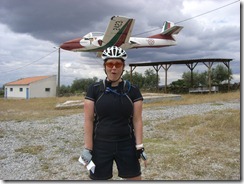 Tonight the hotel was only 20 km from a town with a bike shop so Ricardo (one of the staff) was nice enough to drive me and the tandem frame (it would not fit in the van with the wheels on) to the shop so they could remove the right drive crank so I could replace the small chainring. I was stressing and Ricardo was so calm and the guy in the shop was so nice and on the way back we stopped for an ice cream. The whole experience really turned my day around. I was psyched for tomorrow.