Today was all about sticking together, savoring the moment and taking pictures. Usually there were more or less two groups and even though people might start with one everyone kinda rode at their own tempo but today we regrouped several times and no one was pushing the pace.

There was a mechanical this morning but it was not us! Thank goodness. And it was resolved relatively quickly.

In fairly short order we finally got see the Atlantic ocean. 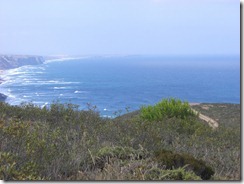 The route skirted the edge of a plateau above the water and several times we would descend to a beach and then climb back up to the top of the plateau.

The top of the plateau was littered with boardwalks so tourists could enjoy the view. Many times you could just ride right out to the view platform. 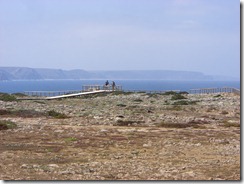 One of the times we descended to the beach the path the tour used to take had been washed away by the winter rains so we had to walk along the sand for about 800 m. It must have seemed strange to the people at the surfing contest we interrupted to see all these people pushing bicycles… 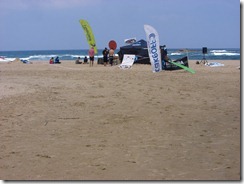 How easy is it to push your bike through soft sand? Not very. You can see how much our feet sunk into the sand. 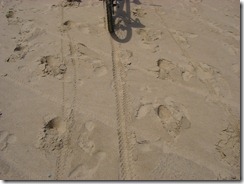 At the end of the beach we finally got to back onto a firmer surface. 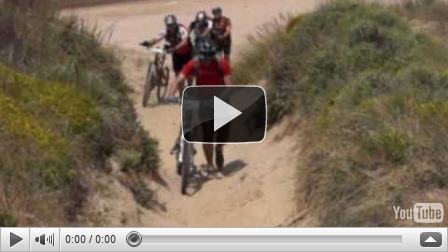 And were immediately faced with the hardest climb of the day. 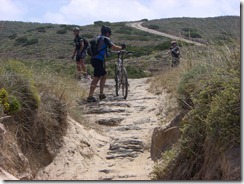 As luck would have it, this hardest climb was soon followed by the hardest descent. Only a handful of people even attempted to ride this and of that handful not everyone made it down. One person that did ride the whole thing was Louize Hill. Way to go. 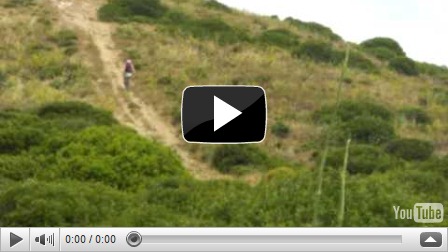 This descent was followed by a climb (of course) and then we came to the G-String descent so named because it runs along a spine with significant exposure on both sides. As we approached the descent I was about to warn Shelley that it was coming up and she replied, "I got it, go go go!" She was filming! 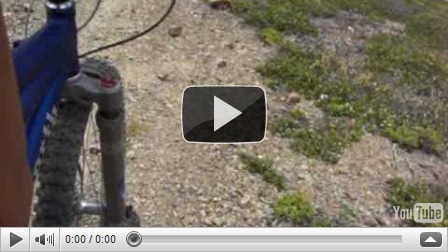 Here I am scouting out the descent. 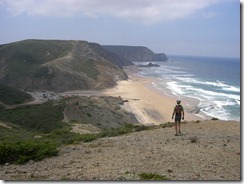 We were not able to ride the beginning as there were some fall-away corners with only inches of trail and the back of the tandem would have slipped off but we did ride most of it. At Shelley's insistence! Nice.

The cafe at the bottom was where we all regrouped for lunch. It was a tiny surf community and i bet this establishment rarely gets as busy as when we all rolled in. 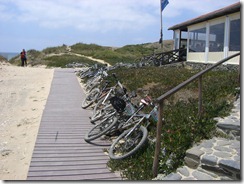 After lunch the final climb was on pavement and then we all rolled to the finish together as a group. 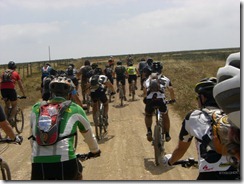 It was really fun to finally ride with everyone and we finally got the chance to let someone else take our picture. 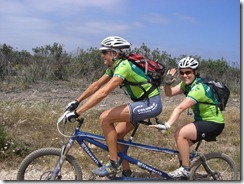 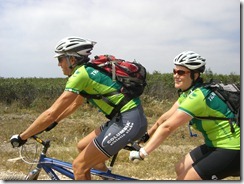 The dirt road was covered in washboards and littered with potholes. On a tandem it's crucial that the captain and stoker communicate – here is what we said on that section of road. Just before descending to the finish we stopped for the obligatory group shot. 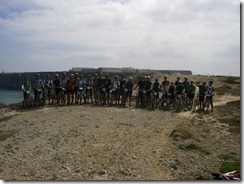 Then we rode over the last few rocks, down a short section of road and finally down a wood ramp right to the beach. We were done! 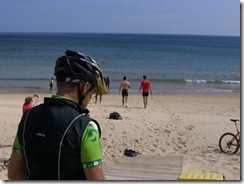 The Atlantic is not exactly a tropical body of water but this far south it was warm enough to jump in and I did exactly that. After tons of well wishes, hugs and thanks we eventually worked our way back up the hill to the hotel. I washed my ride clothes one last time, hung them up and then we all (all that clients that hung around that is) went to dinner for our final group meal and the awards ceremony.

Dinner was a traditional sort of seafood gumbo with rice, tomato and three different kinds of fish and prawns all in one big pot. Yum. 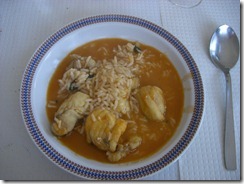 I think we drank a little more wine tonight than usual…

Antonio goes all out for his clients. Not only did everyone get a certificate of completion, he also had a special t-shirt made up for each person that rode all 14 days. 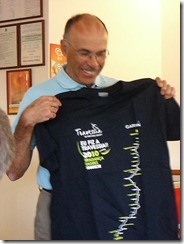 To quote him, "We could have written the words on this shirt in English but they have greater meaning in Portuguese." I like that.

Everyone got called up and recognized. It felt so good to get a hug, my certificate and to know that Shelley and I had completed this together! 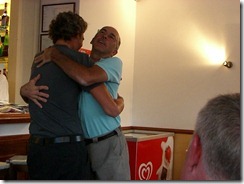 I'm pretty sure Shelley was very proud of herself as well. This smile looks very genuine. 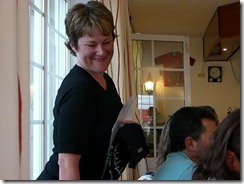 At the awards diner everyone was saying that I was a hero for riding a tandem over all these roads and over all these hills. If there is a hero in this story it's Shelley for the entire ride with me. She usually could not see what was coming up, she was sitting on the less comfortable end of the bike and she has never done anything like this or this hard before. I am so grateful for her company, her encouragement throughout the ride and her tenacity and will to finish what we started. Amazing.

When it was finally time to leave the restaurant we got a final shot of the 15 clients that rode all 15 days. 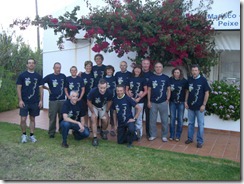 Thank you Antonio, Berta and all the staff at CICLONATUR; we had a wonderful time.