Ah… the day-after blues, the physical relief and the drive back to the big city.

After sleeping in I boxed up the bike. We don't have any pictures or movies of this but as I was trying to box it up outside of the hotel the wind was really blowing. After thrice retrieving objects from the underground parking garage where the wind was blowing them Shelley suggested we just move down to the garage… Genius. Once down there we were able to finish up without interruption.

Breakfast was yet another example of how the organizers go all out to make your experience special. By now most of the clients had left. They invited those few clients that remained INTO THEIR HOTEL ROOM where we had bread, butter, jam, cheese, cold cuts, cereal, yogurt, juice, tea and coffee. I mean c'mon, where else can you get this kind of service? Nowhere, that was rhetorical.

Then we loaded up the van (which had the seats installed again now that all the duffel bags were gone) and headed north.

A car ride is a car ride for the most part. Sure the scenery was nice but Antonio did us a huge favor and instead of taking the freeway all the way to Lisbon he stayed on the coast and we took a ferry over to Setubal on the mainland. Beautiful! The ferry connected an idyllic, sandy peninsula (obviously a wildly popular vacation and summer fun spot) with the main land mass. They had passenger only ferries and car ferries – all of which were painted a very high-visibility green. 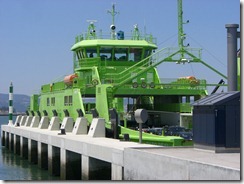 Once back on the road we drove across a massive, 16 km bridge on the A12. 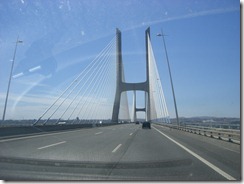 I felt like I was on the set of one of those build it bigger shows.

Kevin and Lesley Anne were getting dropped off at the airport so we took advantage of the 'left luggage' office and paid them to store our boxed bike. That was the best 8 Euro ever spent. From here it was back to Hotel Barcelona and then off to the market below the bull fighting arena for beer and breakfast food.

Finally we indulged in what has become a Lisbon tradition for us (if you can call doing something two times in four years a tradition); we went to the Pizza Hut next door to the hotel and ordered a large pie. Armed with this and our beer we watched television in bed and relaxed. Truly, there was nothing I would rather have been doing at the time.