The passenger van that carried us to the start was now converted to the luggage van. Out came the seats and in went the duffel bags. 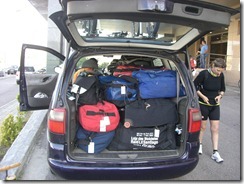 The stage today was supposed to be 77 km but it turned out to be more like 80... hose last three km are kind of heartbreaking when you are really, really, really ready to see the finish. Day 1 will do that to you.

The first half of the ride had the longer climbs and went pretty well but the second half of the day had some shorter, wicked steep climbs which we had to walk. It was also a day of crazy mechanicals, accidents and biblical plagues.

First I went to put on my shoes in the hotel before the start and there was no buckle on my right shoe. I could not get the buckle off my spare shoes so had to switch my cleats out and wear one 'new' (read: pretty darn old) shoe and one old (read: ancient) shoe. Then during the ride our cassette started coming loose. At first it just rattled but soon our shifting was affected and I had to occasionally overshift to grab a gear. I have never had a cassette lockring work its way loose and so the cause of this was a mystery to me.

As we approached one of those steep climbs in the second half I bailed off the bike pretty suddenly causing Shelley to fell on her left side. She scraped her elbow and when we tried to start riding again we discovered that her left cleat was still in the pedal! Try as we might we could not fix the shoe because the threaded insert was stripped and the screws would not hold. So with about 30 km to go Shelley could only clip one foot in.

Then we noticed some latex oozing from our rear tire – yep, puncture. On the up side the sealant was doing a super job! We lost maybe 5 lb of pressure and that was it.

With about 10 km to go we stopped to walk and Shelley could not get her right foot out of the pedal... Turns out this cleat had also worked itself loose and now those threads were stripped too. Luckily this time I was able to flip the threaded insert and use the other two holes. So with 10 km to go Shelley was not only not clipped in with one foot, she was also experiencing the frustration of rapid-fire mechanicals, scraped up, super exhausted and getting roasted by the sun. Welcome to day 1.

Did I mention biblical plagues? The flies...! Every time we stopped or even slowed today we were getting absolutely swarmed! I swear it was like we were a pile of dung and it was feeding time. Totally crazy. It was so bad we had to constantly swat or wave our arms at any speed under about 10-15 kph. Not so easy to exceed when you are climbing or walking!

Oh yeah, the mount for our GPS is now cracked too. No idea when that happened. So far our unit has not gone sailing off the bike so here's hoping that trend will continue.

I was feeling stellar for the first half but faded in the second. I had four cheese and jam sandwiches with me, ate three of them at fairly regular intervals but it was not enough. By the time I realized I should have eaten the fourth it was too late. I also went through TWO 100 oz bladders in my CamelBak and was still experiencing a net loss of fluids. Thank goodness for local water taps. 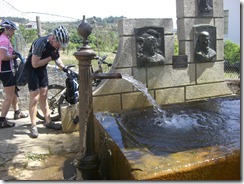 I was already sweating like a faucet on the first couple of climbs and this continued throughout the day. To top it off my sun block was making me feel like I was wrapped in cellophane for some reason.

With about 20 km to go we hit a café and had a Coke and ice cream. It was delicious but those were still 20 hard km... While I ate and drank my eyes drifted across the street where the local male population was gathered playing what looked like some variation of horseshoes or Bocce but with rocks. 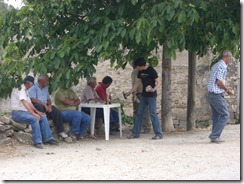 They would take a swig of beer, huck a rock, walk over to see where it landed and then have more beer. Repeat. Must be a local thing. There was obvious technique involved in the throw but the goal of the game escaped me.

At one point today we descended an old Roman cobbled road that was really overgrown so you were constantly getting slapped from both sides by foliage and on occasion from above as well. Not to mention that it was very rocky (hello, Roman cobles!) and kinda tricky to ride. This was understandably pretty nerve wracking for Shelley and unfortunately corresponded with when we both were starting to feel a little bonked and when the flies were starting to mass. We had to walk the rest of the descent and most of the ascent all the time waving our arms like crazy people.

Fortunately, and it was one of the reasons we came here, all the little villages we rode through were amazing. It's like a time warp/youth suck. All the architecture is traditional, each building seems like it is about 1000 years old, all the streets are cobbled and you see VERY few young people. Everywhere it's folks who are 40 and up, actually mostly 50, 60 (70, 80?) and up. Today is Sunday and so every town square is full of the 'men' shooting the shit and having beers. Or just sitting in a doorway saying nothing. The countryside is pretty too but we sort of stopped looking around as much during the last 30 km.

After finishing today one local client commented that he was glad it had not been hot today. Yikes!

At the end of the day we were pooped. I washed the bike, put it in the hotel garage and while we were waiting for dinner got to witness a dramatic pigeon rescue. That's right, seems a pigeon had gotten itself stuck in the roof tiles of the local church and someone had the bright idea to set it free. The local male decided to make a huge production out of the rescue and got a ladder, hauled it up to part of the roof, hauled another ladder up, joined them together, climbed up and then got scared and couldn't continue. Finally it was up to one of the clients on our tour to climb up on the roof and rescue the pigeon. 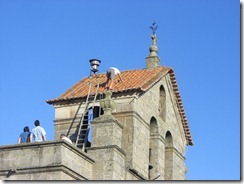 The entire town square was filled with people (read: there were about 50 locals milling about) and he got an enormous cheer.

Dinner was in our hotel and we were served by the owner who was an incredible hostess and famous for her quince jelly as it turns out. We had it for dessert and for breakfast.