At this point you will notice that I sometimes ran out of energy to download the GPS data every day after our ride was complete… The ride profiles are mostly correct so they will have to suffice.

Today we met Mario Silva for the first time. He planned on riding the last few days of the tour entirely on his unicycle! Just like tandeming, the unicycle community is a niche group and they have all kinds of stuff no one has heard about; like hubs with internal gears. Mario was riding on his 29" bike with a two-speed hub to facilitate going faster on the flats and on pavement. And to his credit he flew! He got maybe a 20 minute head start on us in the morning and it took us almost two hours to catch him. 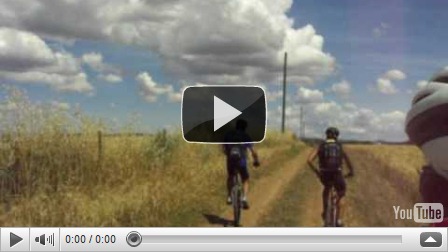 Okay, let's just get this out of the way. After the cleat on Shelley's other shoe would not release from her pedal (it had also worked its way loose apparently) we fixed it by removing the wedges and cinching down the bolts again. Then we noticed that one of the springs on her left pedal was busted. Not a crisis, the pedals are double-sided, but it's just one more thing to add to the list. I'm really glad we didn't break any more spokes!

Before the lunch stop that is. As we pulled in for food I decided to check the rear tire and wheel (for some reason it had become habit by now) and what do you know… there was another broken spoke. Riding around with one spoke missing is usually no big deal. Especially if your wheels are well built which ours hopefully were since I built them myself. But two…? And on a tandem bike that is getting hammered all day long? Plus, whenever you break more than one spoke it's a safe bet that the rest are not far behind so reluctantly I sat down and commenced some much needed bike maintenance. Here I am wallowing in my own misery. 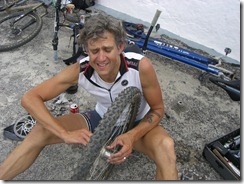 And here I am after realizing that Shelley is taking my picture. 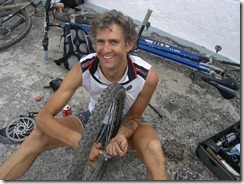 Today was a long haul. And hot. The sky was pretty blue all day and at the last café stop about 25 km from the hotel I had some cherries, an orange, a sandwich, loads of water, two juices and an ice cream. I was depleted. It saved my bacon. And no, it did not stop me from the usual post-ride snack, beers and a huge dinner and yes, I still devoured all my sandwiches we had made at breakfast.

Towards the end there was an option to take a paved road instead of a 10 km stretch of brutal stone road so we opted for the asphalt and I think it was a good call. We still had to climb the hill to the hotel at Monseraz which was wicked steep but at least it was only about 1.5 km to the top. By then we were both feeling our spirits lift just a little and Shelley even suggested we take a cobble detour instead of riding the asphalt road all the way to the top. We almost made it. :)

Thanks to Shelley still wanting to go for it after such a long ride and for boosting my spirits all day long and during the bike maintenance. Oh yeah, and who got me a Coke while I was replacing spokes? Shelley.

On this hill the cobble streets were contoured just like the underlying granite. At times they did not even cover the granite. 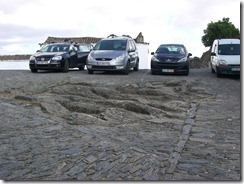 As we walked around the town at the top of the hill and explored the castle the battery in my camera expired. Rats. The castle included a mini bull fighting arena inside the castle walls! Amazing. And our cafe was perched on a wall with a fabulous view out over the valley below.