Leaving the hotel today you immediately climb up a big hill on a looong cobble road. At least it's 'new' cobles and not Roman cobbles but we still had to walk a significant portion. It was just too steep and too early in the day.

ASIDE – on steep climbs with a hard surface our 6" (150 mm) fork makes the front end kind of floppy and it's hard to maintain a straight line. Add in the jarring of the cobbles and we have to walk a few more climbs than you would on a single I'm learning.

The nice thing about long climbs is they are usually followed by long descents. Today was luckily not an exception to this rule and we were able to reel most of the bunch back in. 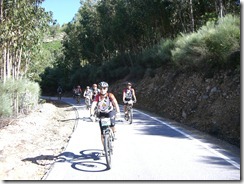 "Tandem Power!" as the local clients seemed to like to say. :)

There were plenty of rollers and rocks today and all that bouncing around puts some serious pressure on your bladder. What can you do but take a nature break? 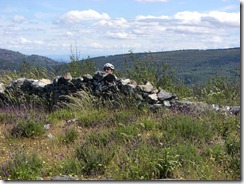 The last descent from this first hill was quite steep and pretty bumpy; one client even put on elbow pads before descending as a precaution. To her credit Shelley was game for riding it and our brakes did a sterling job.

Today the route took us next to some reservoirs. Because of the phenomenally wet winter Portugal had experienced, these were full to the brim. So full in fact that our intended route disappeared underwater twice. 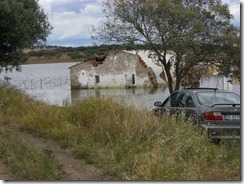 Thanks to the miracle of GPS technology we were able to construct a detour around the vanishing track and impromptu lakes and get back on course. Not before we accidentally ambushed a family picnic though; these people had settled down by the new lake shore and were getting ready for a feast when suddenly 25 cyclists showed up. 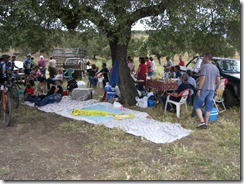 I was convinced that today was going to be a day free from mechanicals. I mean, what else could go wrong, right? Lots. With (thankfully) less than 10 km to go Shelley asked me to pull over so we could look at our rear tire and wouldn't you know it, the thing had failed just like the first one. 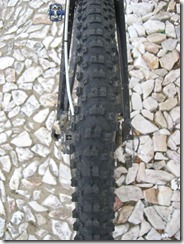 Somehow air was getting in between the inner casing and the tread and the pressure was causing the tire to bulge. Seems like a manufacturer's defect to me but no doubt being on a tandem and on really rocky roads was contributing to the problem. Still, it sucks. And we broke a spoke in our rear wheel too. The support van met us with a new tire and sealant and shortly we were back on the road. Replacing the spoke did not seem critical as the wheel was looking pretty fair.

At this point I'm trying to notice things that still ARE working on our bike... The problem is as I look around in search of these things I see all kinds of stuff that is about to blow up.
- The cleats on my shoes have had it. The shoes that I am wearing are so worn out the sole does not protrude far enough so I am walking directly on my cleats and I'm worried they won't last the rest of the trip. I don't have any spares.
- Both our front and rear derailleur cables are frayed – just beyond the clamp but still. It's making me nervous.
- Will our new small chainring last until the end of the ride? I will NEVER buy another aluminum inner ring for the tandem... steel is the only way to go.
- Will the new rear tire last? I am so hoping the Kenda Nevegal is just a cheap ass tire and what we have now (IRC) is better.
- Will both of our chains last?
Tandems are hard on equipment! Especially when you ride them in extreme or long events.

Once safely at the hotel with clothes washed and bike stowed we finally had the energy to walk around town. There was a beautiful square complete with fountain, playground for kids and of course the ubiquitous cafe. You know what the locals eat as a snack? Boiled snails. 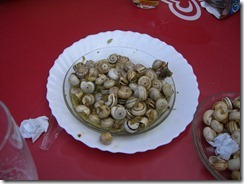 We joined our fellow riders and ordered beers. Then I had to open my big mouth and comment on how small the beers were here in Portugal. Before you could say, "What's on tap?" we were being presented with larger ones. 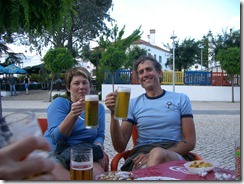 Now I could not help feel like the big American that has to have his big beer. :( Oh well, it's the price you have to pay and today the cost was not so arduous.