Oh man, add this to the list of stupid things I have done...

On the up side, I warmed up on the last climb and was then able to hammer the last descent and that was FUN. I guess this means my legs were not toast and I just felt crappy because of the cold. Bonus. It was also pretty cool [Hahaha... get it?] to finally get my first introduction to this famous Scott Jurek route.

Huge thanks to my companions who gave me a gel, some Sport Beans and a handful of nuts and a date so that I didn't keel over on the trail.

Here is the turn-off to one peak. Awesome. 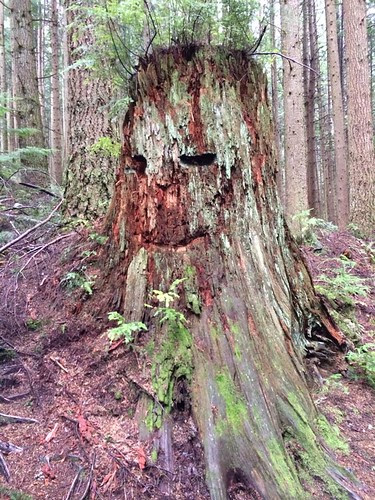 Saturday night I sent out the, "Hey, anyone want some company for a run tomorrow...?" message and boom. Seattle Mountain Running Group to the rescue. Guess what they had planned, 12 Peaks it is.

To make a long (34 miles, 9.5 hours) story short, everything ended up fine. There were times during the run (which can only be described as such in the loosest sense) that I was seriously worried about my ability to stay warm. I got lucky. Several times I ran climbs that no one else did just to light a fire inside of me. By the end of the run I was eating one gel every 30 minuets and it wasn't enough. Yikes.

My Patagonia Houdini Jacket freaking saved my life! Without that I would have been toast. Burnt toast. I took the hood off for the first climb but after the first descent pretty much kept it all the entire way back tot eh car. out of necessity!

My GPS starting running out of juice around mile 20...?! So I put it into UltraTrac mode and the rest of the run was a total mish-mash. Bummer. Here is what the route was supposed to look like.

We actually bagged 13 peaks today. We thought we were headed up South but ended up here.

I'll be back, but not until it's warmer.

Here are all the pictures I was able to scavenge.