As the mid-term election draws near I'd like to encourage everyone to get out and vote. Even if you disagree with my choices, voting your conscience – especially if you have done even a lick of research to back it up – is to be commended. Nothing worse than hearing people whine about the election results and then finding out they didn't vote...

Who does Martin endorse? Nine times out of 10 I vote for everyone and everything that The Stranger endorses. I like to pretend that I'm a fiscal conservative but really I'm all about social issues, social responsibility and and am willing to spend money to support those ideals.

Speaking of elections and campaigns, Shelley and I were watching television the other night when another Dino Rossi campaign ad graced our screen. I remarked that I could not recall the last time I saw a positive political ad. These days they all seem uber negative. Democrats too.

I suppose it could be for a couple of reasons.

In spite of the fact that modern political races seem devoid of substance, they are NOT devoid of humor as this speech will attest to. 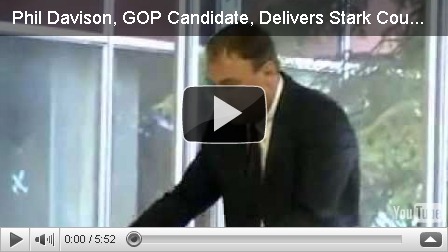 All I can say is Phil could not have had more perfect comedic timing if he was doing this on purpose. I lied... And is there really such a huge difference between this lunatic and people like Christine O'Donnell? Sarah Palin? Nice.

Email ThisBlogThis!Share to TwitterShare to FacebookShare to Pinterest
Labels: politics