Since the Frostbite TT got rescheduled this year today was my first TT. Yep, I was a little apprehensive.

I needn't have been. My bike felt really solid – even in the strong wind. I never had to come out of the aero bars except to stand at the start, the turn around and the last corner just before the finish. I love my front wheel, the tri-spoke handles much better than a deep rim in my opinion. And my position felt really good! A huge plus since I have changed it up a tad and have only ridden it on the trainer so far this year. I keep lusting after some new/fancy (read: very expensive) TT bike but obviously this thing is getting the job done just fine.

We showed up at the start plenty early and it was BLOWING. It also was not as warm as any of us wanted so the clothing debate began.

"What are you going to wear, long sleeve undershirt or short sleeve with arm warmers...? Gloves? No gloves?"

Sometimes I think bike racers sound like junior high girls on date night. Or is that the other way round?

We set up the trainers and I was having the hardest time warming up. I just could not get myself to put in anything even resembling a hard effort. This is a big problem for me and it's chronic; I spin easy for a bit, try to shift up and go for 60 seconds or so but then bail after about 15 as my chain flies back up the cassette to a larger cog. Sheesh...! I did this about three or four times and finally it was 20 minutes to go so I just climbed off and hoped I would be okay.

We started with one foot clipped in and one foot on the ground. The poor official at the start was so cold his hand that he used to count me down from 5 seconds to go was shaking like crazy and his pen was bouncing off of his clipboard as he tried to write. I took off in the small chainring as we were going uphill; I think I stood to get the gear rolling and then shifted up once and kept it there in the saddle to the first corner.

ASIDE – I had heard horror stories from everyone that finished this course. Everything from "I could only go 20 mph on the way out!" to "I never even shifted into the big chainring!" so I had no idea was in store. Turns out it was not that bad. Assuming you have a bit of experience on the TT bike of course. Less than one km from the start I was in the big ring.

The wind was strong but it was manageable. AS long as I kept weight on the aero bars it really was not an issue. Some stretches were worse than others but from what I recall I kept it in the big ring all the way to the turn around. Here I had my only bobble as the wind was not directly in my face and as I transitioned from the aero bars to the wings where the brake levers are I almost bit it.

Once around the cone it was off to the races. As I was waiting to start Alex T rolled up having completed his ride and told me it was a race to the turn around. He was right. In very short order I was in the 55x12 bombing the return. It was then that I tried to shift again and realized I was already in my smallest cog. :( This is the first time I have even needed a larger gear so chalk that up to course knowledge and next year I will be that much better prepared.

Passing people/getting passed can be a mental game in any TT. Luckily I passed three people (all on the way out) and on one passed me. At times on the way back I was positively grinning as flying down this road at top speed was a BLAST. Kind of like being on a roller coaster.

I had been warned to slow down to sub 35 mph for the final turn before the climb to the finish but not having a cyclometer on my TT bike I had to guestimate. In retrospect I slowed too much and then was able to storm up the final rise so perhaps I had too much left in the tank. Honestly, it was hard to empty the tank spinning on the way back... Brad and Greg were waiting there to cheer me on as I crested the rise.

My 8th place in the TT was good enough to move me from 20th up to 10th in GC. I was starting to like this race.

Brad had a great ride and placed 5th. Karsten H gave us a preview of things to come by blowing second place away. 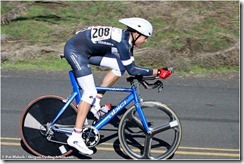